Turkey's decision-makers need to step up and change their destructive policies rather than inventing an international conspiracy to blame for the country's currency crisis. 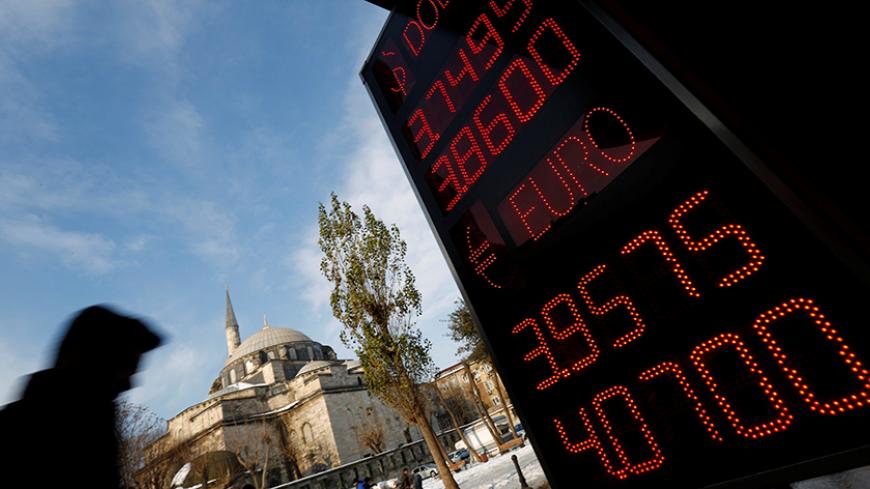 Gauging the value of the Turkish lira against the US dollar has required the power of divination so far this year. Anxiety is high as Turks wait to see whether the lira will tumble more and reach the once-unimaginable level of 4 lira per $1.

In the first days of 2017, the lira's value declined so rapidly that even the Turkish Central Bank’s actions could not stop the drop. On Jan. 10, the bank lowered the level of foreign exchange reserves so it could add $1.5 billion of liquidity to stabilize the lira's value.

Less than six months ago, when the parity level was 3 lira to $1, the gloomy forecast for 2017 predicted parity could reach 3.85 and stay there until 2018. Within the first 10 days of 2017, the level exceeded that figure, and on Jan. 12, parity temporarily surpassed the “psychological threshold” of 3.90.

Now, 4 lira to a dollar is entirely possible and is seen as a harbinger of the big financial crisis to come.

The Financial Times observed on Jan. 10, “Turkey appears closer to a full-blown currency crisis than at any point since the ruling AK [Justice and Development] party took power in 2002. In the past three months, the lira has lost almost a fifth of its value against the dollar, as both global and domestic investors lose confidence in their country’s economic prospects.”

In another story on Jan. 8, the Financial Times observed, “Turkey has gone from investor darling to crisis candidate in a few years. … Ankara enters 2017 little-loved by investors.”

The currency dropped more than 9% against the dollar in the year’s first eight trading days, and this figure adds to last year’s 17% slump. The Turkish lira’s depreciation made it one of the worst emerging-market performers in 2016.

To the Financial Times, the headwinds facing Turkey outweigh those of every other major developing country: “With investors wary of committing money, the rehabilitation trade that has supported bonds, equities and currencies in four of the so-called 'Fragile Five' — Brazil, South Africa, Indonesia and India — currently eludes Turkey. … The Fragile Five were identified three years ago as the countries most vulnerable to rising US interest rates and a stronger dollar thanks to their large current account deficits. While the rest have recovered their balance and made current account adjustments, Turkey is lagging behind. And long-term investors say the mood appears bleak.”

Last year, Moody’s Investors Service followed Standard & Poor's by downgrading Turkey’s credit rating to junk, leaving Fitch Ratings as the only major agency that rates the country as investment-grade. But in its latest report, Fitch mentioned Turkey as one of the “most fragile countries against the systemic risk,” along with Venezuela and Ethiopia.

The data indicates Turkey will be facing an inevitable financial collapse or at least a severe economic crisis this year. Such a crisis will worsen the security situation in Turkey, which suffered a terror attack within the first hours of the new year in Istanbul.

Such a gloomy prospect is the consequence of Turkey's decision-makers, above all President Recep Tayyip Erdogan, who insists on the wrong prognosis. Speaking Jan. 12 about the meltdown of the Turkish lira against the dollar, he said, “You know that the economy is manipulated for the objective of attacking Turkey. There is no single difference between the terrorist who carries a weapon in his hand and the terrorist who possesses a dollar or euro in his pocket. Both aim to divert Turkey from its targets. They use currency as a weapon.”

Erdogan and government ministers aren't the only ones voicing that theory recently. It is also entertained by pro-government Islamist circles. They tend to see the financial hardships as the result of a coordinated assault on Turkey by the West in the wake of the July 15 failed coup. Abdurrahman Dilipak, a prominent Islamist columnist for the Islamist daily Yeni Akit, wrote Jan. 11, “The value of the Turkish lira dropped even below the Saudi riyal. Fitch is waiting in ambush. There is a collective assault against the Turkish lira.”

In a critical note, he added, “What is MIT [Turkish National Intelligence] doing against this? The dollar operation is the continuation of July 15. When will an operation be launched against those who take part in this operation?”

Experts, however, say Turkey is suffering from a self-inflicted crisis of confidence and only a swift and sizable rise in interest rates will stabilize the lira.

There is an unmistakable correlation between the lira's unstoppable slump and proposed constitutional amendments to give Erdogan stronger executive powers. The debate in parliament is incredible — each time the subject is broached, there are fistfights and broken noses. Under such political tension, the Turkish lira keeps eroding.

In the Jan. 8 article, the Financial Times reported, “The overwhelming worry is that systemic weakness could unravel into crisis. … Economic growth has plunged amid terrorism, a sharp tourism slump and devaluation. After averaging 6 percent in 2015, [gross domestic product] growth in the year to the third quarter of 2016 was minus 1.8 percent. This was before the oil price [rise] of the fourth quarter and the worst of the devaluation.”

Turkey has yet to make the tough decisions that will mend its economy. And, it seems, it will not. Erdogan prefers to blame economic problems on a nefarious conspiracy of international financiers. Though there is a consensus that the only remedy in the short run is for Turkey to raise interest rates dramatically. Erdogan is against it because, obviously, high interest rates will prevent economic growth.

The danger now is not only that Turkey’s economic growth will stop, but that it will stop under rising inflation. The worst-case scenario for economists — stagflation — might be awaiting Turkey.

Though the economy was once a major boon to Erdogan's political success, he will be haunted by its collapse. And the blame, many believe, falls on his suicidal policies.