Palestinians welcomed US Secretary of State John Kerry’s strong position on settlements, but do not believe it will positively influence the incoming US administration. 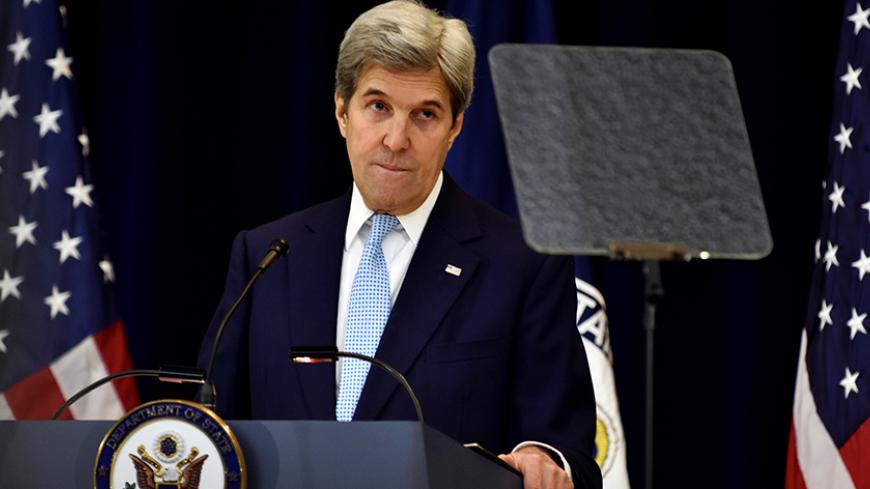 US Secretary of State John Kerry delivers remarks on Middle East peace at the Department of State in Washington, Dec. 28, 2016. - REUTERS/James Lawler Duggan

Palestinians generally welcomed the speech delivered by US Secretary of State John Kerry Dec. 28, although they also felt it was more geared toward defending the anti-settlement vote on Dec. 23 at the UN Security Council than presenting a bold, new initiative. A short, seven-minute excerpt, temporarily posted on the State Department website, features the highlights of the speech in terms of why the United States abstained on Resolution 2334, affirming the illegality of Israeli settlements. The 73-minute speech, delivered in the State Department’s Dean Acheson Auditorium, appeared particularly aimed at saving Israel from itself in making a last ditch effort to save the two-state solution.

Palestinian President Mahmoud Abbas reacted swiftly to the speech, announcing that the Palestinians would return to peace talks if Israel halted settlement activities. A statement read by chief Palestinian negotiator Saeb Erekat and quoted by the official Palestinian news agency, Wafa, read, “The minute the Israeli government agrees to cease all settlement activities … and agrees to implement the signed agreements on the basis of mutual reciprocity, the Palestinian leadership stands ready to resume permanent status negotiations on the basis of international law and relevant international legality resolutions … under a specified timeframe.”

PLO Executive Committee member Hanan Ashrawi remarked that despite everything President Barack Obama and Kerry have given the Israelis, they are still not satisfied. She told Al-Monitor, “I am amazed. Eight years of total disdain toward the Obama administration, and after Kerry gave them everything they want, summarized in six principles that reflect the Israeli position, they were unhappy.”

Ashrawi said that Kerry had to prove his Zionist credentials in the speech, but that the Israelis still trashed his speech. “They rejected their own priorities simply because [Kerry] reminded them of the US public position that settlements are illegal and that they need a Palestinian state to rescue Israel from itself,” Ashrawi said.

Noura Erekat, a law professor at George Mason University in the United States, told Al-Monitor that it was a positive move that Kerry had tried to be realistic after eight years of the Obama administration’s inaction, but that the Palestinian state is not the ultimate objective of Palestinians. She said, “The two-state solution is not for Palestine as much as it is for Israel.”

Erekat cited as a parallel example what had happened to Jews in Europe. “In the same way that Zionism was not the be-all and end-all solution to anti-Semitism, the Palestinian state is not the be-all and end-all solution for Palestinians.” In her opinion, a sounder solution requires dealing with the “colonial apartheid settler enterprise” that has taken hold of the Israeli system. “A sovereign state will protect Palestinians from further encroachment and will stop the expansionist apartheid regime, but what Palestinians need more than a state is freedom,” she said.

Mustafa Barghouti, a member of the Palestinian Legislative Council (PLC) and leader of the Mubadara Initiative, told the Refugees website Dec. 29 that Kerry's description of the current right-wing Israeli government had been very “accurate” and “unprecedented.” He said, “Without the recognition of the rights of Palestinians to freedom and dignity, the only option left is a single state or the continuation of occupation and the apartheid regime that [the occupation] has brought with it.”

Hanna Issa, the head of the Islamic Christian Council of Jerusalem, told Al-Monitor that Kerry stating that the settlements hamper the two-state solution was welcomed, but took issue with other important aspects of it. Issa said, “He adopted the Israeli position by taking issues out of context. He talked about the Jewish state without talking about other parts of UN Resolution 181, which deals with Jerusalem as an international city. And he talked about compensation to refugees, which is part of what UN Resolution 194 talks about, without talking about the right of return.”

While Palestinian reactions to the content of Kerry’s speech were generally mixed, there was agreement that it was too little, too late. Erekat said people should not forget the time that was wasted during Obama's two terms. “What he didn’t tell the world is why he waited until 23 days before the advent of the new administration before saying what he said,” she commented. “Is it aimed at making us forget eight years of unprecedented support for Israel by the Obama administration?”

One issue that has prevented a breakthrough in Israeli-Palestinian peace talks is that Israel has never had to pay a political price for its obstinance and unwillingness to compromise. While in April 2014 Kerry made a brief reference to Israeli responsibility for the failure of the talks he led, Israelis were, two years later, given a hefty $38 billion, 10-year military aid package.

Kerry's attempt to set the record straight and to pinpoint who was responsible for the failure of negotiations, while not explicit, partially mitigates the problem, although the incoming Donald Trump administration is unlikely to pay much attention to it.

Palestinians counting on the United States to rescue them from the decadeslong occupation might feel good about some of what Kerry said, but are unlikely to see any concrete changes. The administration set to take over is unlikely to give Kerry’s last-minute speech on the Middle East conflict much thought.