Did US backtrack on Palestinian statehood to please Israel?

The United States’ strong position against recognition of a Palestinian state has exposed the vacuity of its two-state rhetoric. 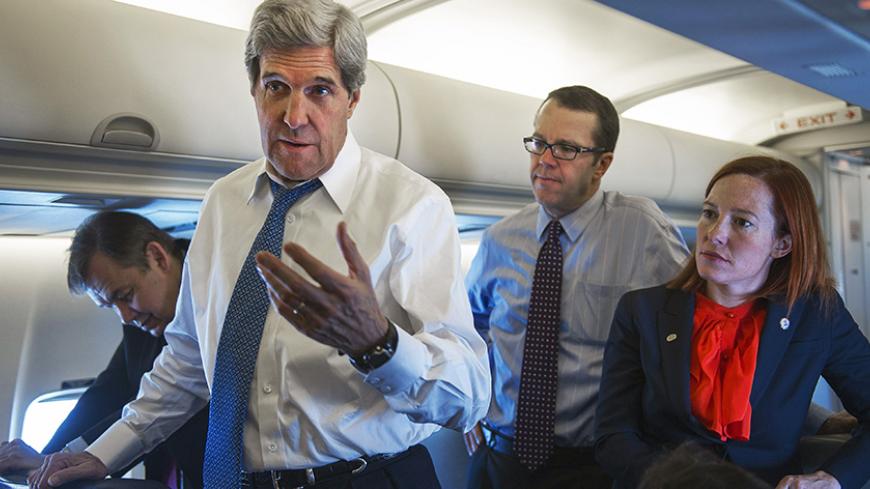 The United States, which has progressively moved toward recognizing the State of Palestine, has suddenly backed away from even using the word Palestine. Were the previous positions merely lip service and are we now witnessing the true US position, or did the United States backtrack to please Israel?

A look at the history of US rhetorical interaction with the issue of Palestine shows progress over the past decades, from ignoring the existence of the Palestinian people to talking about Palestinian statehood.

George W. Bush received much attention as the first US president to use the word Palestine during a speech he made at the Saban Forum in December 2008. “At the heart of this effort is the vision of two democratic states, Israel and Palestine, living side by side in peace and security. I was the first American president to call for a Palestinian state, and support — and [to] build support for the two-state solution has been a top priority of my administration,” Bush said.

The term State of Palestine was used 38 times in official statements and speeches by the Republican president.

President Barack Obama's Democratic administration followed suit. US Secretary of State Hillary Clinton confirmed that she had used the term as first lady in the Clinton administration. Speaking at the American Task Force on Palestine's gala dinner in 2010 in Washington, Clinton recalled to the applause of the audience her stand on Palestine. “As first lady, I may have been the first person ever associated with an American administration to call for a Palestinian state and the two-state solution. This goal is now the official policy of the United States,” she said.

A search on the US State Department's website reveals that the term State of Palestine was used 104 times in official communications during the tenures of Clinton and US Secretary of State John Kerry. Obama’s official White House website has 30 references to the State of Palestine.

US official reference to the State of Palestine is usually within the goal of a two-state solution. The term Palestine is often juxtaposed with Israel as the goal of the peace process, rather than a direct recognition of Palestinian statehood. However, in remarks to the pro-peace Jewish lobby group J Street in September 2013, Ambassador Martin Indyk explicitly referred to the current existence of Palestine: “Public opinion among Israelis underscores that Prime Minister [Benjamin] Netanyahu will have strong support from his fellow Israelis should he succeed in presenting them with an agreement that secures their future in an end of claims, end of conflict agreement between the state of Palestine and the Jewish State of Israel.”

US officials routinely appear in front of the Palestinian flag fluttering in Washington and Ramallah as well as at the United Nations.

But all this public display came to a halt when Palestine was voted in by the UN General Assembly (UNGA) as a nonmember state in January 2013. At the time, US Ambassador to the UN Susan Rice distanced the United States from Palestine. “The United States does not consider [the] UNGA [R]esolution 67/19 as bestowing Palestinian ‘statehood’ or recognition,” she said.

The Obama administration repeated the same language in regard to the latest efforts by President Mahmoud Abbas to join the International Criminal Court. In the State Department briefing on Jan. 7, spokeswoman Jen Psaki was very blunt. “The United States does not believe that the state of Palestine qualifies as a sovereign state and does not recognize it as such and does not believe that it is eligible to accede to the Rome Statute,” she said.

The United States’ retraction from the mere mention of the term Palestine after years of consciously flashing it shows that either the United States was never serious about Palestinian statehood or that Washington is once again playing politics and conceding to Israel’s demands and pressures.

Foreign Policy magazine reported on Dec. 19 that Kerry had privately told his European counterparts that the UN vote for Palestine would “embolden Israeli hard-liners.” Kerry’s attempt to press Europe to refrain from any support for Palestinian statehood at the UN, until after the Israeli elections in March, was highly publicized by former Israeli Justice Minister Tzipi Livni, who took the credit for Kerry’s position vis-a-vis Palestinian statehood.

The rhetorical use of the term Palestine versus the real position of the United States and Israel shows the lack of seriousness by Washington to help Palestinians obtain their coveted state. PLO Executive Committee member Hanan Ashrawi often uses the term lip service when talking about the United States’ lack of genuine support for the two-state solution.

Whether it is their repeated rhetorical opposition to Israeli settlements or their lip service to Palestinian statehood, it is hoped that the United States once and for all says what it believes and acts on what it says.