Three working groups for the Paris Middle East conference are preparing an incentive package for Israelis and Palestinians with the hope of enticing them to reopen negotiations. 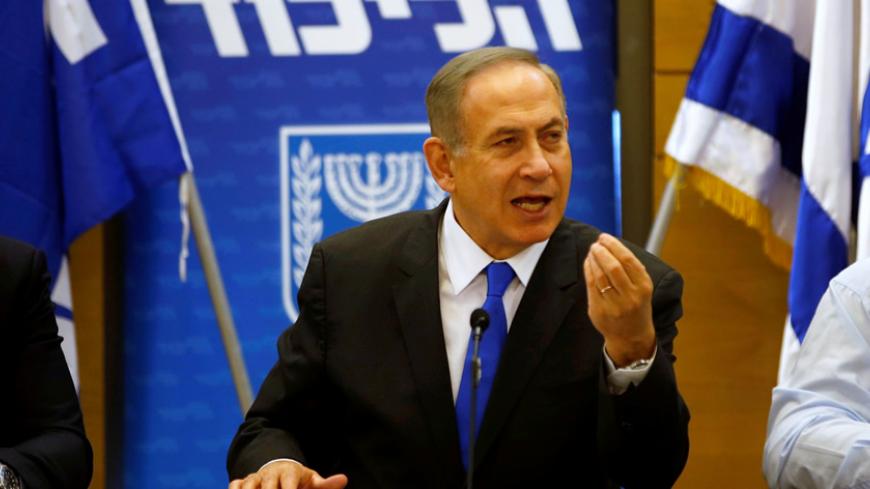 France's Dec. 22 announcement of a second Paris Middle East peace conference to take place Jan. 15 hardly surprised Israelis. With the adoption the next day of UN Security Council Resolution 2334 affirming the illegality of West Bank settlements, however, they could not help but wonder whether the two steps had been coordinated.

Regardless of this and a disagreement over whether the conference had been rescheduled to guarantee the participation and input of US Secretary of State John Kerry, Israel had already made up its mind. The prime minister’s office declined the invitation even before Paris confirmed the date, reiterating that Israel will only engage in direct negotiations with the Palestinians. Many Israelis agree with Prime Minister Benjamin Netanyahu in his refusal to take part in the conference, but what exactly is the conference expected to produce? A declaration? A working plan? The basis for another Security Council resolution? It seems that much has been written about Netanyahu's rejection, but little about the actual conference.

To clarify, Netanyahu did not turn down an invitation to the conference per se, but declined an invitation to meet in Paris with Palestinian President Mahmoud Abbas immediately after the gathering. The French had hoped that a double-track approach — first a conference and then a separate meeting between the Israelis and Palestinians to present them with the conference recommendations in a discrete setting and away from cameras — might convince the Israeli premier to participate. Alas, it did not work.

According to the French plan, a double-track approach made perfect sense, because the aim of the conference is to prepare a benefits package, which can be assembled without the two opposing sides being present. The idea behind the package is to entice the Israelis and Palestinians into eventually reopening negotiations.

A source at the French Foreign Ministry, who spoke on condition of anonymity, said, “Our goal was never to open talks immediately or to propose a comprehensive peace plan. What we set out to do was to put the Israeli-Palestinian conflict back on the international agenda and to bring the two sides closer to reopening talks. And this is what we did.”

To prepare the benefits package, 28 states and organizations had met in Paris at a conference June 3 to identify domains where the international community could be of use. They settled on three areas: civil society, institution and state capacity building and economic assistance. The civil society component would be aimed at both Israelis and Palestinians, while capacity building, and especially economic assistance, would target the Palestinians.

From the start, France avoided creating a formal mechanism for preparing the package, given that the Israeli-Palestinian conflict has seen plenty of peace-making mechanisms, protocols and frameworks, to no avail. Instead, the idea was to constitute very loose and flexible working groups for the three domains. Each conference participant could join whichever group it preferred, and the composition of the groups was kept as discrete as possible. Sweden, for instance, initiated and led within the civil society group, the Germans took the lead on capacity building, and the Norwegians together with the European Union focused on economic aid.

“Official Israel declined the offer to participate, and made no suggestions,” a senior EU official told Al-Monitor on condition of anonymity. “The Palestinians were mostly involved with the second [capacity-building] group, and made some suggestions. They brought several constructive ideas about border crossing and infrastructure.”

The EU official explained that the dynamics of each working group were different. The civil society group started from scratch, interviewing stakeholders and building an inventory of perceptions and situations on the ground, while the financial aid group based its work on structures already in place.

“Our work [in the civil society group] focused on examining the level of dialogue between the two sides,” a Swedish diplomat told Al-Monitor on condition of anonymity. “We met in Stockholm several times and phrased a set of questions, which we addressed to Israelis and Palestinians in an effort to create a snapshot of the reality on the ground. We mainly wanted to know how the two-state solution was perceived by the societies of the two sides.

“We spoke to NGOs, associations, bloggers and other actors. Everyone apart from politicians. The results of our survey are by no means scientific, but I believe they reflect well the situation at hand, of a deep divide on both sides between the pre-Oslo generation and the post-Oslo generation. The youngsters have lost hope in the two-state solution, but offer little [in its place]. Groups like [the] ultra-Orthodox or women are excluded from the debate over the issue, and so they do not feel responsible in any way toward the situation.”

According to the diplomat, the civil society group's recommendations to the January conference will focus on communication from two different angles: better communicating to the two sides what the two-state solution means, including what life will be like absent such a solution, and connecting Israelis and Palestinians by proposing channels for dialogue. On the practical level, a conference could take place at a later stage to bring civil society stakeholders together, but it is too early to talk about a realistic working plan.

The international community can offer the Palestinians a series of development and financial incentives, so the capacity-building and economic aid groups intend to present more specific projects at the January conference. Sources from the latter group explained that Norway had been reluctant to integrate the Ad Hoc Liaison Committee (AHLC), which it sponsors, into the list of proposals and recommendations by the group. As they see things, the AHLC, established after the Olso Accord to coordinate development assistance to the Palestinians, is practically the only meeting framework for Israeli and Palestinian officials that actually functions. Since it works, it shouldn’t be disturbed.

Israeli diplomats who recently spoke to Al-Monitor are skeptical about the various incentives, claiming that most of the proposals resemble projects that are already in progress or are ideas that have been floated in the past, of particular note, offering Israel and the future Palestinian state an upgrade in their relations with the EU.

Paris is aware that such an upgrade would be a “difficult sell” to the Israeli public. “Israel would welcome such an upgrade, of course, but what we really need is political will to reopen negotiations and achieve a compromise, not incentives,” said the senior EU official. “The Palestinians would be onboard in any case, as they can only gain here, but Netanyahu won’t play along, if all he can gain is an agreement with Europe.”