Gaza residents are furious at Hamas for pouring funds into the tunnel enterprise while they are left without electricity, and Israel is wary of attacks as distraction from their mass demonstrations. 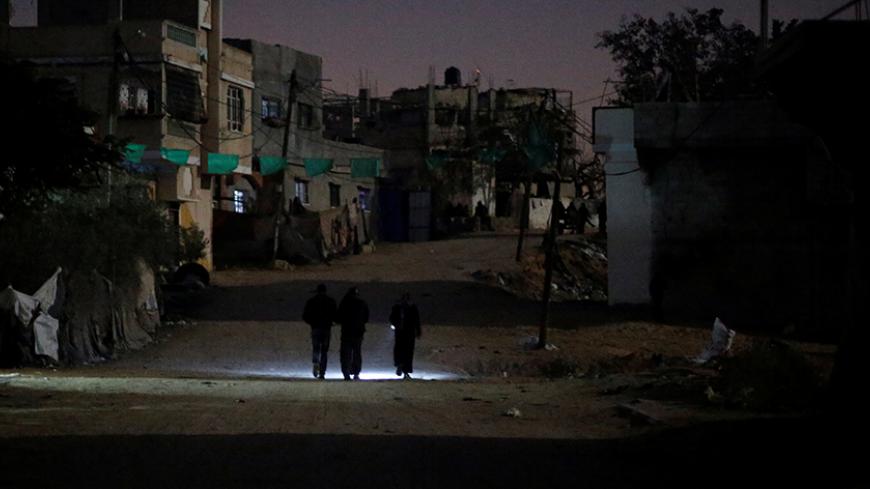 The fear barrier surrounding the Hamas regime has broken. For the first time, thousands of demonstrators took to the streets Jan. 12 over the electricity crisis in the Gaza Strip. The protesters were not afraid of Hamas’ security forces and were willing to confront them. Ever since Hamas took control over the Gaza Strip in a military coup almost a decade ago, many residents in the Strip have suffered from extreme poverty. As far as many of them are concerned, they no longer have anything to lose.

The movement’s leadership, those of the political and military wings alike who had quickly suppressed early signs of popular protest against the regime in the past, were shocked by the intensity of the electricity protest. And this time, they cannot get away with casting the blame elsewhere.

In the past, Hamas would blame Israel and its blockade for the serious economic situation in the Strip. It also blamed the Palestinian Authority leadership, mainly President Mahmoud Abbas, for “abandoning his people” and not reconciling with Hamas due to his self-serving agenda. This time, it didn’t work. It seems that the Strip's residents no longer view Hamas as the victim of Israeli policy.

Now, for the first time, Gaza's residents have turned an accusing finger to the tunnels, where Hamas’ military wing invests millions of dollars, instead of investing to improve the lives of the residents who endure disgraceful poverty and hardship.

A resident of the Jabalia refugee camp who participated in the stormy demonstrations told Al-Monitor that after some of the demonstrators shouted “tunnels, tunnels,” Hamas began an aggressive and violent dispersal of the protest.

“People were shouting ‘tunnels’ and it was clear that they were saying: How is it that you have money for tunnels, but not to finance the diesel oil needed to produce electricity for the residents? I think that they did not even imagine that thousands would go out to demonstrate against them and would not fear them. Everyone is sick and tired of living this way, year after year, without a future and without hope.”

Israel keenly followed the protest, and before any Hamas leaders could try to turn the residents against it, the Coordinator of Government Activities in the Territories accused Hamas of causing the crisis. In an interview with Palestine's Maan News Agency, Maj. Gen. Yoav (Poli) Mordechai explained that Israel continues to transfer diesel fuel to the Gaza power station that supplies 122 megawatts to the Strip. In fact, Israel had quickly fixed a glitch in one of the electrical lines only a few days before the protests broke out. In addition, Mordechai noted that Hamas’ tunnels are lit 24 hours a day by diesel generators — with fuel destined for the Gaza residents and stolen from them. Mordechai also said that Hamas leaders enjoy electricity around the clock, in contrast to residents who only receive three hours of electricity a day.

The Israeli security apparatus seems satisfied that this message has registered and that Hamas’ attempts to deny its own responsibility have failed. “Only after they understood that this time their excuses won’t work did they start operating,” an Israeli security source told Al-Monitor on condition of anonymity. Ismail Haniyeh, deputy chairman of Hamas' political bureau and the person expected to be soon designated Khaled Meshaal’s official successor to head the political bureau, turned to Qatar and Turkey to help Hamas resolve the crisis. Qatar and Turkey are currently Hamas’ sole benefactors. Turkey announced that it would send large quantities of fuel to power stations in Gaza. Qatar also announced that it would donate $12 million, enough for Gaza's residents to get through the winter with not a full electrical supply but enough to lessen the pressure on Hamas. Thus, at least at this stage, electricity-related threats to Hamas’ regime have been averted.

Members of Israel’s security system understand that now more protests against Hamas are likely to break out and spread. “The more that the movement’s leaders sense that their grip on the territory is loosening and that there is danger of civil protest against their regime, the more likely they are to raise jihad against Israel to the top of their priority list,” an Israeli security source told Al-Monitor on condition of anonymity.

According to the source, the Israel Defense Forces are very experienced in deciphering Hamas’ modus operandi in deflecting public pressure on the movement. “Prior to the eruption of the Protective Edge campaign,” said the security source, “for about half a year, Hamas was not able to pay the salaries of the employees of the civil and military apparatuses, and it felt that its Gaza regime was in danger. The only answer it could offer its residents was to intensify security tension against Israel. Back then, heating up the sector though a confrontation with Israel not only deflected pressure from Hamas but also gave the movement’s leaders an excuse to ask for urgent assistance from those countries that usually come to their aid — for example, Qatar and Turkey. And that is exactly what Haniyeh did in the current electricity crisis.”

The security source said that Hamas’ leaders learned their lesson from the Protective Edge conflict, which snowballed out of control. According to the source, Hamas wouldn’t want matters to reach another all-out war with Israel. Such a conflict would constitute in itself a threat to their regime. However, if Hamas feels that its regime is in danger, it will not hesitate to open a front against Israel, hoping to control the height of the flames. Therefore, it is still important to Hamas to continue its tunnel project as deployment, while simultaneously keeping close tabs on the possible organization of civil disobedience.

The Hamas regime faces no immediate danger. However, should protests start to spread in Gaza over electricity or other civil issues, Hamas’ military wing will not hesitate to oppress them with violence and widespread arrests.

But the larger question is: How long can Hamas continue to rule the Gaza Strip without offering normal lives for its people?