With smaller militant groups threatening Hamas' position in the Gaza Strip, the movement might decide to launch a military operation against Israel. 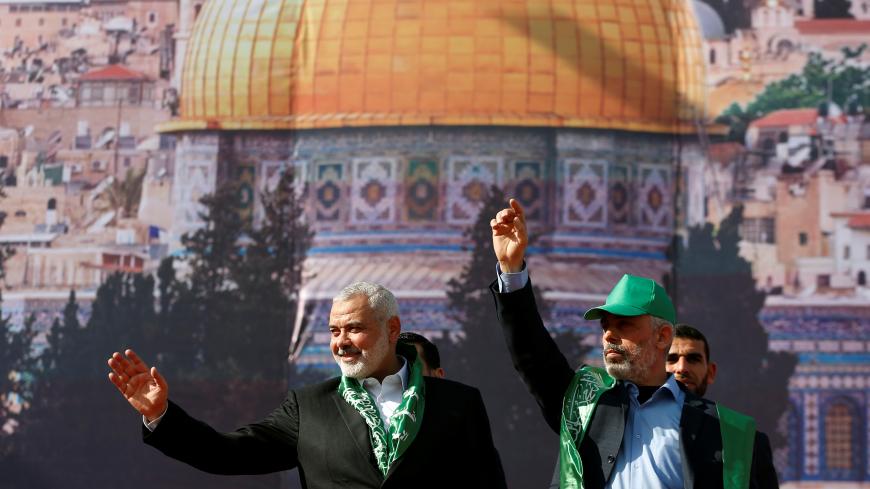 A recent series of events send a clear signal that Hamas is losing its grip on the Gaza Strip. According to a security source in the Palestinian Authority (PA), these events may bring down Hamas’ rule. Speaking on condition of anonymity, he said that although it is too early to make an educated guess as to how long the “dying process” might take, it is, indeed, occurring on two levels: in the deterioration of the humanitarian situation, and in the weakening of Hamas’ security control and the deterrent edge of its military wing over the other armed groups.

On Feb. 19, the aid convoy led by Mohammed al-Emadi, chairman of Qatar's Gaza Reconstruction Committee, was attacked. Emadi was on his way to a press conference he had arranged at the Shifa Hospital to announce a Qatari financial contribution that would ease the severe shortage of equipment and medications, at least in the near future. Emadi never imagined that he would be confronted by furious Gaza residents, even before entering the hospital.

Once inside the hospital, Emadi was again attacked, this time by the cleaning staff, who threw shoes at him to protest not having received their salaries. The show of fury continued after Emadi left the hospital. His convoy of cars was stoned by protesters, who called on him to stop providing assistance indirectly — that is, to institutions and organizations — and to instead give directly to the people, for the benefit of the hungry residents in Gaza. The protesters dared not say out loud what many Gaza residents whisper to one another lest they be overheard by Hamas: They fear that the money will never reach them because it will end up in Hamas’ pockets.

A journalist in Gaza who witnessed the protests near the hospital told Al-Monitor that although the Qatari envoy needed the Palestinian security apparatus to protect him, he wasn’t the real target of the people's anger. “They took out [their anger] on him because they want him to understand the message that they can’t say publicly, lest they come to harm,” he said, speaking on condition of anonymity. The journalist explained that Gaza residents are still too intimidated, at this stage, to protest against Hamas' leaders, but in his opinion it’s only a matter of time. “They have nothing to lose,” he said.

In January 2017, during the electricity crisis in Gaza, thousands of people demonstrated against Hamas, confronting its security apparatus, which dispersed them by force, including gunfire. The present crisis is not only over electricity shortages, but the severe crisis affecting all aspects of life: Unemployment is rampant; the health system is falling apart; businesses are going bankrupt; and even UNRWA, the UN Relief and Works Agency, cannot meet the population’s basic food needs. If demonstrations erupt again, they may not be as limited as in the past, and Hamas may not be able to break them up as easily.

The activities of the other armed organizations in the Gaza Strip also testify to the weakening of Hamas' control there. On the afternoon of Feb. 17, an explosive device was detonated against Israel Defense Forces (IDF) soldiers near the border fence. Four soldiers were wounded, two of them severely. Defense Minister Avigdor Liberman said that Israel knows that those responsible for the attack belong to the Popular Resistance Committees (PRC). Senior Hamas members recently in Cairo informed Egyptian intelligence that they were not responsible for the explosion and that neither was Islamic Jihad. Their assessment as well was that the perpetrators were from the PRC. Hamas made it clear to Egypt that they have no interest in escalating the conflict with Israel at the moment.

While it is generally believed that Islamic Jihad coordinates its actions with Hamas and submits to the dictates of the leaders of the ruling movement in Gaza, the PRC is viewed as a recalcitrant organization that is always trying to get loose of Hamas’ tight grip. Its members placed an explosive device on the border fence because they know that residents are furious at the controlling leadership, but primarily because they realize that Hamas would have to turn a blind eye to their action. At this stage, Hamas would not dare enter into an armed confrontation with other organizations.

For the time being, Hamas wants to maintain united armed forces lest its leadership be harmed. Should widespread, angry protests erupt that are directed at Hamas and threaten its control, it might try to initiate a limited military confrontation against Israel to distract attention from internal problems in Gaza. According to the Palestinian source, this is the reason that Hamas encourages demonstrations by Gaza residents close to the border fence with Israel. It allows them to let off steam generated by their frustration.

That is exactly what worries the IDF, and that is the reason that Maj. Gen. Yoav Mordechai, head of Coordination of Government Activities in the Territories, on Feb. 19 issued a warning to Gaza residents against protests near the border fence. He emphasized that the IDF would begin to escalate its response from that moment going forward. The IDF is aware that the more Hamas loses its grip in the Gaza Strip, the more Hamas will target the border with Israel.

The astonishing thing is that although Hamas leaders are aware of the danger and understand their situation, they are not operating any differently in order to protect their position. The movement’s leader in Gaza, Yahya Sinwar, announced last year that Hamas was willing to relinquish civil rule to the PA, but didn’t understand that his organization would not have the privilege of then operating only in a military capacity.

About 2 million people live in today’s Gaza Strip, and their fury at the Hamas leadership constitutes a very significant threat to the organization’s continued rule.

by Murielle KASPRZAK and Joseph SCHMID | AFP | May 26, 2022
END_OF_DOCUMENT_TOKEN_TO_BE_REPLACED