Iraqi teachers unsafe in own classrooms

The Iraqi prime minister has called on the security forces to protect schoolteachers from attacks by their students while the parliament considers penalizing crimes against educators. 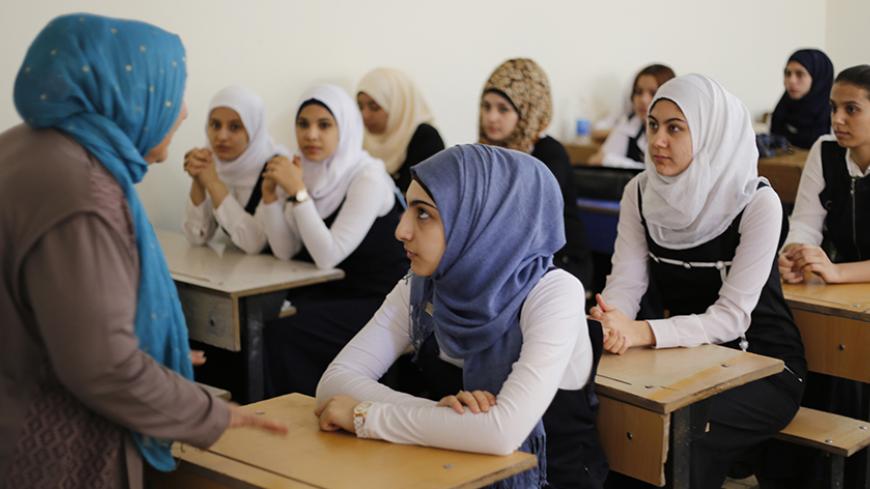 BAGHDAD — Iraqi Prime Minister Haider al-Abadi instructed security services “to prevent the abuse of teaching and educational staff,” who he said “have taken upon themselves the educational mission of raising generations for the future of Iraq.” He also called for “pursuing whomever tries to insult either educational bodies or students.”

Abadi’s brief statement on Jan. 17 came in response to a series of attacks within Iraqi educational institutions. Iraq is already facing an educational crisis with a lack of school facilities and faculty. Increasing numbers of students are dropping out of school, and 18% of the population is illiterate.

On Jan. 16, the teachers union in the southern Iraqi province of Basra announced that the assistant director of a high school was found dead after being kidnapped on Jan. 14. The union posted to Facebook that he was killed “at the barbaric hands of the enemies of humanity and education,” without directly accusing anyone.

On Jan. 10, the director of the Basra night school al-Nussour was taken to the hospital after being bludgeoned by a group of students. The Basra police arrested two attackers, but the rest remain at large.

On Jan. 8, teaching staff of Al-Taakhi school in Muthanna province, southern Iraq, were assaulted by a student and members of his clan. Some teachers were injured as a result.

The media director for Muthanna’s educational directorate, Abbas Zaidi, told Al-Mada Press that the attack came in response to a teacher asking the student to leave class after being late. The student gathered his clan to take revenge.

The Ministry of Education does not keep statistics on attacks against teaching staff, but the latest three incidents suggest that clans and tribes in Iraq are beginning to intimidate and impose their norms on government institutions, in particular the educational system.

Iraqi Education Minister Mohammed Iqbal al-Saidaly said in a statement, “The attacks against teaching staff affect the state’s stature, because these are assaults against those who are raising the next generations. Everyone, without exception, is responsible for protecting our schools.”

Khadija al-Jabri, a member of the parliamentary education committee, told Al-Monitor he believes the increasing assaults on teachers “poses a clear threat to the level of education in the country as well as security,” calling on security institutions to do more to protect teaching staff.

Asked about measures that could help, Jabri said, “The education committee is in the process of passing a law to protect teachers from attacks. The new law would grant schoolteachers the same protections granted to college professors. Whoever assaults a teacher should be punished accordingly and could be sent to prison or forced to pay the teacher financial compensation.”

However, the law that the parliament intends to pass does not seem like it would be much of a deterrent to attackers, since Iraq’s penal code issued in 1969 essentially punishes “whomever insults or threatens any person entrusted with a public service or a council or an official body or a court of law or an administrative court while performing their duties or because of them.”

Jabari also noted that the penal code “currently applies to all those who attacked the teachers.”

Ministry of Education spokesman Ibrahim al-Sabti revealed that a group of soldiers in the Iraqi army attacked teachers and staff in a girls' school in Anbar province in western Iraq. The attackers were later arrested, he told Al-Monitor.

Sabti said, “Two lawsuits are filed after each assault on teachers. The victim files the first lawsuit and the Ministry of Education files a second lawsuit to restore the school’s stature.” He added, “If the victim waives their right [to follow through] after being pressured by a certain tribe, the ministry will not give up.”

The enactment of a law to protect teachers may seem like a good idea, but it can never truly put an end to assaults. It is very common for patients' relatives to attack doctors in Iraq. Last year in June, a doctor was attacked and very badly injured after an operation on a patient was unsuccessful. The state has got to find a way to constrain the tribes and clans and present itself as a powerful, reliable institution by enforcing the laws instead of keeping them tucked away in the drawers of the executive and legislative authorities.