France’s foreign minister, during a two-day trip to Iran, emphasizes the importance of the Joint Comprehensive Plan of Action, while also saying France is studying the reports of a Jan. 29 Iranian missile test. 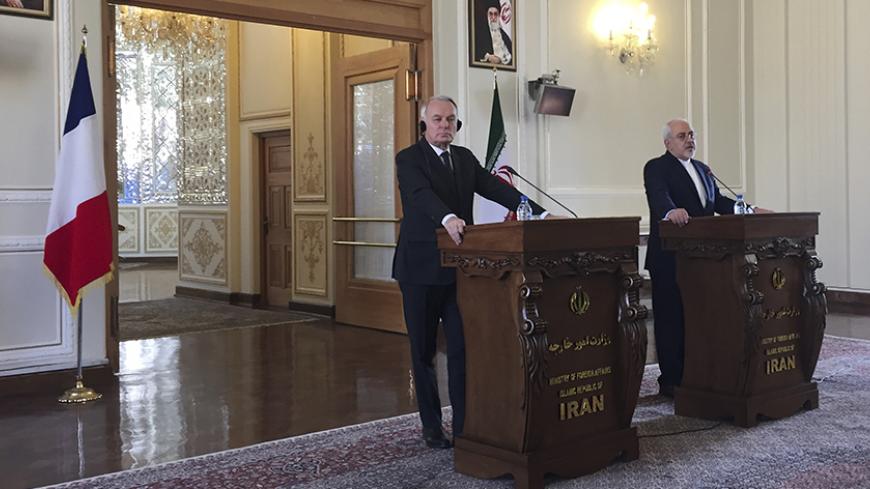 In a joint press conference in Tehran on Jan. 31, the Iranian and French foreign ministers emphasized the importance of the continuing implementation of the Joint Comprehensive Plan of Action (JCPOA). Ayrault said, “We are against any initiative that is contrary to the spirit of the JCPOA, and especially if it leads to new negotiations.”

Noting US President Donald Trump’s campaign pledge to tear up the nuclear deal, Ayrault added, “Trump has made remarks during his presidential campaign and afterward, and we have paid attention to this and have concerns about this, but we are waiting to see what will happen, and we are very cautious and careful.“

Referring to Trump’s Jan. 27 executive order to ban citizens of seven Muslim-majority countries — including Iran — from entering the United States, Ayrault said, “The unilateral position to forbid the issuing of visas under the pretext of combating terrorism in America is very concerning and not at the right time. Common sense requires Trump to retreat.”

Hinting at the ongoing issues faced by Iranian banks despite the lifting of sanctions under the nuclear deal, Ayrault stated, “You should have a positive view of French banks. There has been progress and there will be more progress.”

“The major banks are avoiding banking transactions, and we are having negotiations with them. The reason for major banks’ avoidance [of business with Iran] is that the United States has punished them in the past — and of course not because of Iran; it is because of other matters. However, they have become cautious,” Ayrault acknowledged.

Iran has repeatedly complained that the July 2015 nuclear deal has failed to convince major banks to resume business with its banks.

Referring to coverage of a Jan. 29 Iranian missile test, Ayrault said, “We are studying the reports. France has expressed its concern at Iran's continuation of its ballistic missile tests on several occasions and has said these actions are against the spirit of the [UN Security Council] Resolution 2231 [endorsing the nuclear deal] and hamper the process of restoring the confidence established by the Vienna agreement.” He added that Paris had “clearly” conveyed its position to Tehran “within the framework of our bilateral cooperation.”

Zarif said at the joint press conference, “Iran does not depend on the permission of others to defend itself … just as all parties to the JCPOA said at the negotiations, missile tests are not part of the JCPOA.“

He said, “The new administration in the United States, presently facing an unfortunate international situation following the imposition of the visa ban, may capitalize on the [missile] issue to provoke new tensions.” Zarif added, “Iran will never use missiles produced in Iran to attack any other country," and "No Iranian missiles have been produced to carry nuclear warheads.”

On Jan. 30, Ayrault said, "France wants to be able to allow a larger number of Iranians wishing to travel to France. … This project, which aims to double the number of visas currently issued for Iran, should take effect in the summer of 2017." At present, France issues 41,000 visas to Iranians a year.

The French foreign minister also noted that bilateral trade has increased by 200% following the signing of the nuclear deal. Indeed, French carmakers Renault and Peugeot have seen a resurgence in Iran, while a contract for the delivery of 100 Airbus aircraft has been signed. Ayrault said ATR’s negotiations with Iran Air for a deal on 20 turboprop aircraft is “practically sealed,” adding that construction group Vinci is in talks for the building of two airports in Iran.

Meanwhile, Reformist Arman newspaper reported Jan. 31, “This is the first trip of a European official to Iran following Donald Trump's taking office. Trump’s adoption of the position that he will tear up the JCPOA and his election as president of the United States have prompted mixed feelings among the P5+1 [China, Russia, Britain, United States, France and Germany]. On the other hand, the visit of the French foreign minister to Tehran is the prelude to the trip of Rouhani to Paris or even a trip by [French President] Francois Hollande to Iran.”