The Gaza government has begun enforcing a ban on smoking in public transportation vehicles at the beginning of the year, to mixed reactions among drivers and passengers. 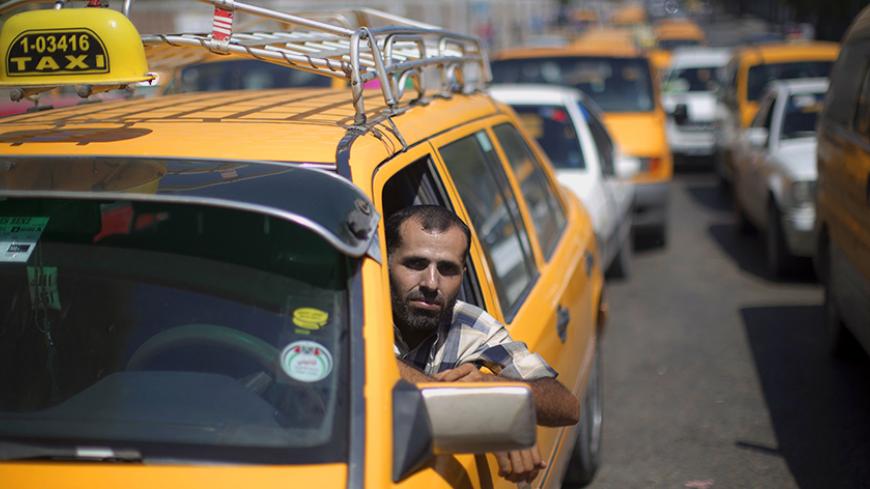 A Palestinian taxi driver waits in line to refuel his car at a gas station in Gaza City, Gaza, Sept. 8, 2013. - MAHMUD HAMS/AFP/Getty Images

GAZA CITY, Gaza Strip — The Gaza government has decided to start enforcing a smoking ban in public transportation vehicles and impose fines of about $26 for drivers who smoke or allow passengers to smoke in their vehicles. Violators began to receive citations on Jan. 1.

Palestinian law bans both drivers and passengers from smoking inside the public transportation vehicles.

Some drivers and passengers welcomed the move, while others complained it is just a new way for the government to generate income to solve its financial crisis.

Cab driver Mohammed Abu Aisha told Al-Monitor, “I have been working as a driver for 12 years and I used to smoke inside my car. It is very hard to let go of this habit, but since the law is being enforced today, I try to avoid it as much as I can.”

Standing next to his car at one of the busiest stops in Gaza City, waiting for passengers with a cigarette in his hand, Abu Aisha added, “Sometimes, I have to stop the car to smoke or refrain from transporting passengers until I finish smoking. In this case … it would be considered a private car if I do not have any passengers with me.”

He stressed that the costly fine is an incentive for him to abide by the law, since he only makes about $18 a day. He said he supports the law, as it protects the health of passengers and citizens in general.

Another driver, Jamal Shabana, told Al-Monitor, “I have been smoking since 1973 and I could never stop the urge to smoke, but it seems that enforcing the law will finally make me quit completely.”

He noted that the law has helped him smoke less, and he now smokes half of his usual whole pack a day. He added that before taking any passengers, he asks them not to smoke inside the car.

Although Shabana is not against the law, he believes enforcing it has more to do with the government’s financial crisis than health and environmental concerns, since the law was issued years ago and is only being applied today.

Cab driver Abu Mohammed told Al-Monitor that even after receiving a ticket from the traffic police for violating the law the day before, he still refuses to abide by it, saying, “I now make detours to avoid policemen.” He explained that he refuses to obey the law because he has been smoking for 15 years and it's a simple pleasure amid the harsh living conditions in Gaza. Choosing to smoke is part of his personal freedom, which he should not be fined for, he said.

Gaza resident Alaa Salameh told Al-Monitor that she supports the law because she is intensely bothered by drivers who smoke. She called on the police to take tighter control over all roads and intersections to catch those who violate the law.

Dairi stressed that the warning period ended Jan. 1 and all violators are now being fined, whether upon being caught by officers or following complaints made by passengers. He noted that citizens welcomed the law, particularly women and the elderly, who suffer most from the smell and environmental pollution caused by smoking in public transportation vehicles.

Dairi explained that applying the law was prompted by the many complaints filed by citizens who criticize the lack of respect shown by drivers who smoke regardless of the passengers’ wishes.

Maj. Ayman Batniji, spokesman for the Palestinian police in Gaza, told Al-Monitor that public transportation vehicles are not the property of the drivers and they must respect the law by refraining from damaging the passengers’ health. He denied claims that the law is being applied to take money from the people, saying, “Collecting money from fines is completely different from collecting taxes. The latter is obligatory, but citizens have a say in the former. If they do not violate the law, the government will not get their money.”

Batniji added that the government chose to apply the law in January because “the capabilities of the traffic police administration have developed and it can now apply the law for the long run, whether by deploying a larger number of traffic policemen at intersections, placing surveillance cameras or by supporting citizens who submit complaints.”

He said that even if a passenger violates the law, “drivers are the ones who pay the fine, since they are the ones responsible for the vehicle and those inside of it. This is why drivers should place No Smoking signs in their vehicles.”

He stressed that if passengers refuse to abide, drivers have the right to force them to step out of the vehicle or report them to the nearest traffic police point.

Notably, the Gaza government decided to apply the smoking ban to public transportation vehicles in 2012, but did not succeed due to lack of resources.

Batniji pointed out that in the coming days, the anti-smoking law of 2005, which bans smoking in public places, may be enforced in places such as in ministries, public places, parks and hotels. He noted that enforcing the law will happen gradually.