For the first time in nine years, Israel has allowed the entry of new taxi cars into Gaza, a decision that appealed to Gazans but was met with criticism by the owners of old and dilapidated cars, who fear that the new cars will put them out of business. 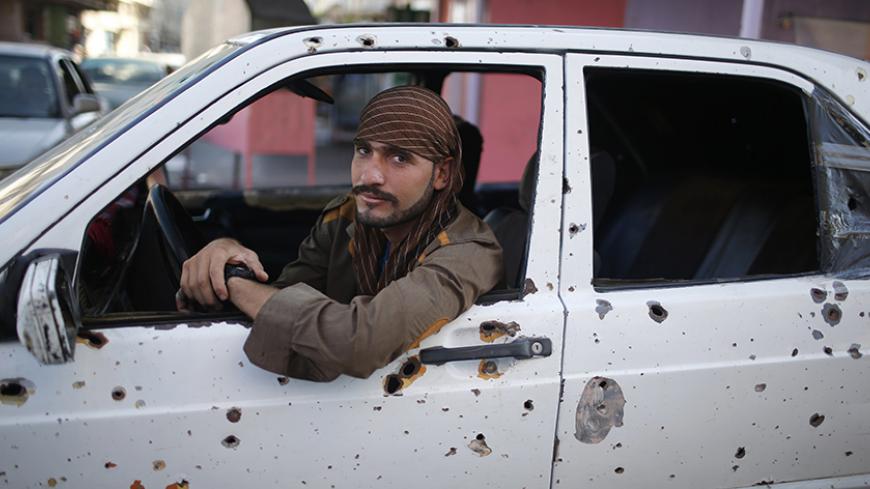 A Palestinian taxi driver sits in his damaged car as he waits for passengers in Gaza City, Sept. 22, 2014. - REUTERS/Mohammed Salem

GAZA CITY, Gaza Strip — For the first time in nine years, Israeli authorities allowed the entry of new taxis into the Gaza Strip on April 13. After Hamas won the legislative elections in June 2006 and came to power, Israel imposed an embargo on taxis as part of a tight blockade restricting a wide range of goods.

Six out of 36 Skoda 2002-model taxis have already entered Gaza while the rest will follow once their registration papers are completed. The entry via the Kerem Shalom crossing in southern Gaza is being coordinated with the Palestinian ministries of transportation in the West Bank and Gaza.

Khalil Zayyan, the head of the public relations department at the Ministry of Transportation in Gaza, said the number of taxis approved for entry by Israeli authorities is nothing compared to the actual number needed, which is estimated to be double the existing 4,000-5,000 dilapidated cars in the Gaza Strip.

In his interview with Al-Monitor, Zayyan explained that the new taxis were introduced as alternatives to those destroyed during the Israeli war on Gaza in the summer of 2014, which are estimated at 1,173 civilian cars (taxi, private and commercial vehicles).

Zayyan hopes that Israel will allow the entry of more taxis in order to accelerate the process of renewal of public transport vehicles, as the transportation system in Gaza relies on internal public and private cars rather than taxis and buses, due to the shortage of taxicabs.

Jamal Abu Jarad, the head of the syndicate of public transportation workers in Gaza, told Al-Monitor, "The Gaza Strip is going through unusual circumstances compared to the rest of the world. We are unable to renew Gaza's car fleet, which counts nearly 70,000 vehicles varying between taxis, private and commercial cars, including around 4,000 to 5,000 taxis."

Abu Jarad argued that the Israeli siege on Gaza, as well as the internal disagreements between the ministries of transportation in Ramallah and Gaza, made it impossible to bring taxis into Gaza. The Palestinian Authority (PA) refuses to request Israel — which previously opposed the idea — to allow the entry of taxis into Gaza in an attempt to deprive its Gazan counterpart of the purchase and value-added taxes it is already collecting in the West Bank, equivalent to almost 25% of the price of the car. The disagreement between the ministries of transportation in Ramallah and Gaza would make the car owner liable for a 50% tax on his car price.

Abu Jarad stressed that Gaza's Transportation Ministry promised the syndicate and car dealers that it will not collect taxes on the cabs slated to enter Gaza, as the ministry wishes to renew the taxi fleet without imposing more expenses on the people. Abu Jarad's claims were confirmed by Rayan, who revealed that his ministry is currently discussing the matter with its counterpart in the West Bank in a bid to overcome the barriers that could halt the entry of cars into Gaza, such as the dispute between the two ministries of transportation over the tax to be collected.

The head of Gaza's association of car importers, Ismail Nakhala, told Al-Monitor, "Only six of the 36 taxi cars approved for entry into Gaza by Israel have indeed entered, while the remaining 30 await the completion of registration formalities by owners."

Nakhala stressed that the whole taxi fleet in Gaza needs renewal, especially 7-seater vehicles that are no longer suitable to transport passengers. He added, "The government is incapable of putting these vehicles out of service due to the deteriorating economy and the difficulty of finding alternatives."

The owners of public 7-seaters and 12-seaters that date back to the 1980s expressed their indignation toward the entry of the new taxis into Gaza. They staged a protest April 14 in central Gaza in which dozens of taxi drivers participated.

Al-Monitor interviewed Mansour Chehaibar who has been a taxi driver for nine years, driving a 1985-model 7-seater Mercedes. He said, "The entry of new 4-seater taxis into Gaza will harm us drivers of medium-duty vehicles because passengers will prefer to ride in new and smaller cars overtaking rickety medium-duty cars."

Chehaibar held the Transportation Ministry responsible for the losses he and his fellow drivers will suffer, as their cars are licensed and allowed to move from one city to another despite Traffic Law No. 5 of 2000 issued by the PA, which restricts small 4-seater cars from operating outside of their respective cities.

Another taxi driver, Jamal Abou Saoud, who operates a 1982-model 7-seater Mercedes, criticized the government, saying, "Our government only seeks to collect taxes from old and new taxi drivers without concern for their situation. These drivers pay their dues to a government that's unable to provide a proper work environment."

Gazans rejoiced at the entry of new taxis, hoping that the whole fleet will be renewed. Younis Radih from Bayt Lahia in north Gaza, told Al-Monitor, "I prefer transportation in small, modern cabs because they save time and provide more comfort compared to small- and medium-duty dilapidated cars that I no longer find convenient."

Teacher Walaa Mohammad from the Gaza Strip said, "In the past, I used to ride in medium-sized cabs, but recently I started taking small, new ones because they are more comfortable, and this way I don't have to wait for the driver to fill the seats — let alone the poor quality of these seats and the dizzying smell of burning fuel."

Drivers started using their new cars just days after their entry to Gaza Strip. Those looking forward to owning and operating taxis can remain hopeful, especially since the taxi driver job has become popular amid rising unemployment and lack of job opportunities. For this occupation, one only needs a driving license and a vehicle.