Some car smugglers in Palestine are carrying out covert importation operations of Chinese cars from Egypt through the tunnels. 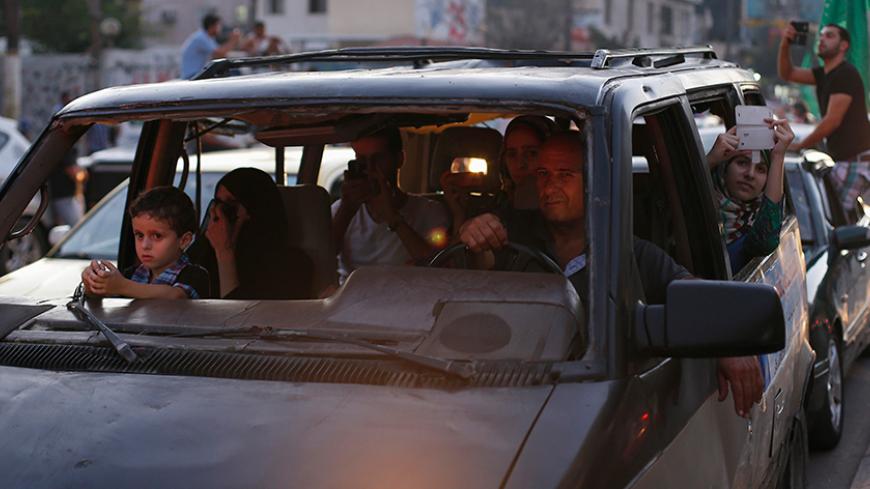 Palestinians ride in a damaged car as they celebrate with others what they said was a victory over Israel, following a cease-fire in Gaza City, Aug. 26, 2014. - REUTERS/Suhaib Salem

RAFAH, Gaza Strip — Since the beginning of the blockade on the Gaza Strip in June 2007, Israel enlisted automobiles as part of the banned goods in Gaza, in addition to other major products.

“The number of automobile importers accredited by the [PA] in Ramallah and the Israeli occupation forces amount to about 54 importers since 2004. No new importers have been accredited since then, and only 30 of them are still operating at this time,” said Ramez Hassouna, the executive director of the Automobile Importers Association in the Gaza Strip.

In early July, Israel announced the resumption of automobile importation into Gaza, as part of the facilities on allowing the entry of 10 other products, in response to international pressure following its attack on the Gaza aid flotilla in May 2010 on its way to the Gaza Strip, which caused the death of nine Turkish activists. However, disagreements between the PA and the outgoing Hamas-run government in Gaza over which party is eligible to manage and coordinate the automobile importation and tax collection hampered the procedure.

Israel’s blockade on automobiles continued and things worsened between the outgoing government in Gaza and the PA until Sept. 21, 2010, when the Israeli authorities allowed, for the first time, the importation of the first batch of cars into the Gaza Strip. Meanwhile, the Hamas government denied its plan to impose any new fees. Hamas announced this position in a press statement by the general director of the technical affairs department at the government-affiliated Ministry of Transport.

During this period, smugglers discovered that they could smuggle cars through the tunnels with Egypt, which is something the Hamas-led government encouraged them to do. Smuggling cars through tunnels was a deliverance for Palestinians from the control exercises by Israel on the entry of cars into Gaza, on the one hand, and on the struggle with the PA on who should be collecting taxes, on the other. Smugglers, then, started to buy automobiles from Egyptian traders, disassembled them to fit into tunnels and transported them to Gaza, where they were reassembled at small local workshops in the city of Rafah.

However, the smuggling process affected the quality of the cars, and thus there was not a high demand for them.

In this context, Abu Ashraf, a mechanic who did not want to reveal his full name, told Al-Monitor, “The assembling of the smuggled cars used to be done in such a rudimentary manner inside local workshops, lacking necessary equipment, which affected the quality of the automobiles.” Abu Ashraf owns one of these workshops in Rafah and used to assemble the smuggled cars.

Between 2011 and 2013, which was the heyday of tunnel smuggling, smugglers managed to develop and equip holes inside the tunnels so as to smuggle entire cars without the need to disassemble them. However, the prices of cars in Gaza remained high because of the high costs of smuggling, in addition to the customs duties on cars coming through the tunnels by the outgoing Hamas-run government.

Al-Monitor met with Abu Hassan, who asked that his full name be withheld, who had been smuggling cars during that period. He said, “In the beginning, cars used to be disassembled and smuggled but were not in high demand. We worked on enlarging the tunnels so as to be able to transport entire cars. However, this cost us too much, not to mention the customs duties by the Hamas government on the smuggled cars. We decided to search for an alternative that could generate profit and provide reasonable prices to consumers. So we opted to smuggle China-made cars — such as Speranza, Jack, Geely, BYD — which have modern characteristics and are sold at cheaper prices.”

Hassouna added, “Chinese cars are imported directly from the official importers and dealership” and only introduced to Gaza through the tunnels of Egypt.

Remarkably, along Salah al-Din street, which is the longest and most vital street of the Gaza Strip, linking the southern border to the northern border, and entrances of Gaza’s five governorates, a number of these cars are used as taxis transporting passengers between and within Gaza governorates.

In this regard, Al-Monitor spoke to Raed Yehya, a driver of a BYD taxi. He said he had bought it from a motor show in the Gaza Strip so that he could provide for his family. Yehya graduated from the faculty of commerce at Al-Azhar University and uses his income as a taxi driver to pay back his tuition in installments.

In Palestine, paying by installments is usually a method used to purchase cars, particularly Chinese ones. The purchase is made when the client and motor-show owner both sign a contract, stipulating that the customer gives a down payment. They agree that the vehicle ownership be transferred to the customer, provided that it officially remains in the name of the motor-show owner, as a guarantee and a collateral until all installments are paid. These can range from $200 to $500 per month. The price of the vehicle is linked to the payment period of the vehicle’s full price, which ranges from $12,000 to $17,000‫.