Twenty-five House Democrats wrote to Barack Obama earlier this month to ask him to stop supporting the Saudi-led coalition. 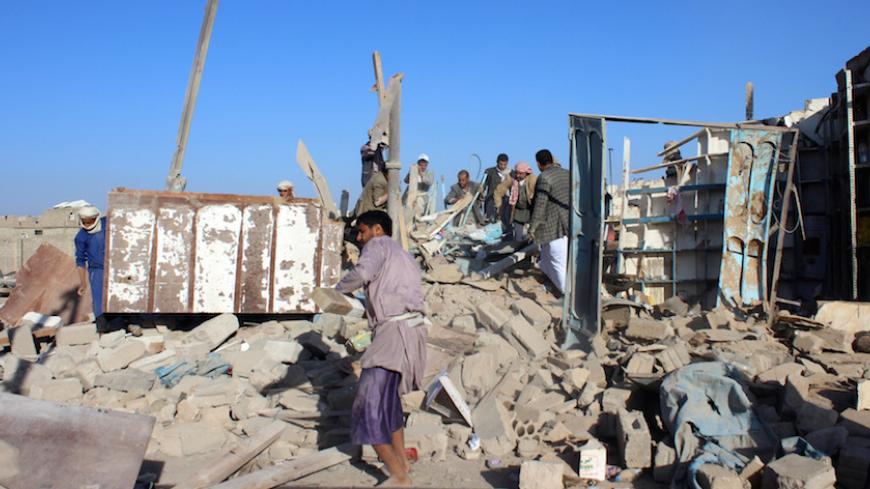 People search among the rubble of a destroyed building at the site of a Saudi-led air strike on the outskirts of the northwestern city of Saada, Yemen, Nov. 4, 2016. - REUTERS/Naif Rahma

Twenty-five House Democrats unsuccessfully wrote to President Barack Obama earlier this month to urge him to end US support for the Saudi-led campaign in Yemen before Donald Trump took over.

The Jan. 13 letter, led by habitual Yemen war critics Ted Lieu, D-Calif., and John Conyers, D-Mich., raises concerns that the United States is abetting “war crimes” by supporting Riyadh’s imprecise bombing campaign. It goes on to argue that the fight against the Iran-backed Houthi rebels is doing little more than fueling terrorism.

“These airstrikes — which have killed children, women, doctors, newlyweds and funeral mourners — are likely war crimes,” the letter states. “We respectfully ask you to do the right thing before you leave office and stop the US refueling of Coalition aircraft that strike civilian targets in Yemen.”

News of the letter comes as the Trump administration signed off on its first airstrikes in Yemen, which are separate from the Saudi campaign and target different actors. Six al-Qaeda fighters were reportedly killed Jan. 21 in a pair of US strikes in the Sawmaa region of Al-Bayda province, while a local military instructor for al-Qaeda had been killed by a drone strike in the same province Jan. 20.

Trump himself has said little of substance about the war in Yemen, but is expected to support the Saudis against their regional foe, Iran — as long as Riyadh pays up.

“Right now if you look at right now, we … already defend Saudi Arabia, right now, we’re defending them. Every time there’s a problem we go in and defend,” he told Fox News a year ago. “And frankly, as far as I’m concerned, that’s all fine.”

Congressional concerns about the Saudi-led effort have been growing since it began in March 2015. More than 10,000 people, half of them civilians, have been killed since then, according to the United Nations.

In September, 27 senators voted to reject a proposed $1.15 billion tank sale to Saudi Arabia in a rare public rebuke of a US ally. The vote was not enough to stop the sale but sent a clear signal to the White House that congressional patience with Riyadh was fraying.

Three months later, the Obama administration blocked a sale of precision munitions to Riyadh because of “very significant concerns about the high rate of civilian casualties” and cut back on intelligence sharing. The US Air Force has since continued to refuel Saudi warplanes, however, sparking the latest letter.

“We are extremely puzzled that the Administration decided to continue the US military operation of refueling the very same aircraft that strike civilian targets in Yemen,” the letter states. “This approach sends a mixed signal to Saudi Arabia and is logically and internally inconsistent.”