Where do Kurds fit in Syria conflict?

The future of the Syrian Kurds hinges on the policies of US President-elect Donald Trump and Russian President Vladimir Putin toward Turkey. 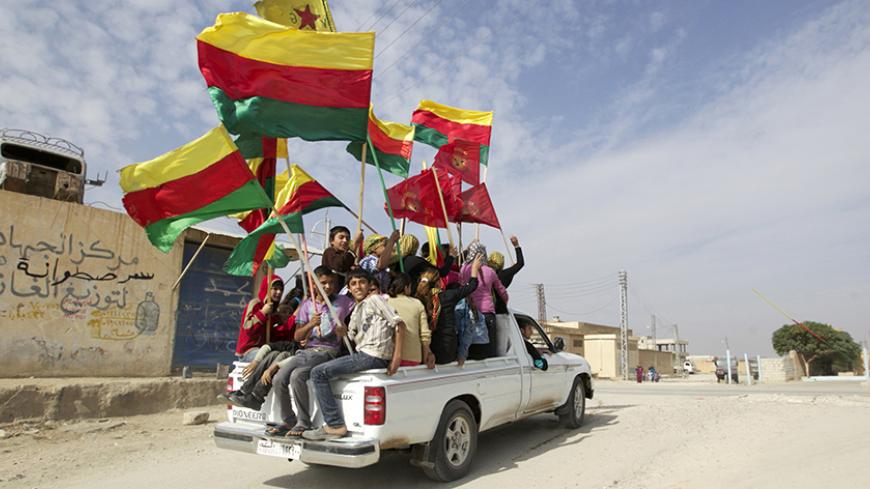 People sit in the back of a truck waving Kurdish flags, as they celebrate what they said was the liberation of villages from Islamist rebels near the city of Ras al-Ain in the province of Hasakah, Syria, Nov. 6, 2013. - REUTERS/Stringer

As the people filling the large hall of the European Parliament building for a conference on the Middle East listened to responses by the panel featuring British writers Jonathan Steele and Carne Ross, I thought about what their co-panelist, Salih Muslim, the leader of the Syrian Kurdish Democratic Union Party (PYD), would say.

It had been only a few weeks before that I had met Muslim, whose party administers swaths of territory in northern Syria and two Kurdish-inhabited neighborhoods in Aleppo, Sheikh Maksoud and Ashrafieh. Since our meeting, there had been two significant developments involving him and actors involved in the Syrian conflict: Turkish authorities had issued an arrest warrant for Muslim, and Syrian regime forces had defeated Turkish-backed opposition groups in eastern Aleppo.

The military success of the regime in Aleppo, aided by Russian air power and Iranian ground forces, will undoubtedly have decisive consequences on the trajectory of the war. Also going forward, the military and political role of Russia in the region will not only affect Syria, but probably neighboring Iraq as well. Yet another major factor in the future of the Middle East is the unexpected victory of Donald Trump in this year's US presidential elections.

Against this backdrop, one might think that whatever Muslim might have had to say at the European conference would be of potential significance. Instead, he was as vague as he could be. His one recurring theme was the importance of the Kurdish self-rule model in northern Syria. The (involuntary) absence of the PYD at the peace talks in Geneva, he claimed, was the main reason for their failure. If the Kurds had been properly represented at Geneva I and Geneva II, then everything would be much different today. Thus, in Muslim’s eyes, acknowledgment of Kurdish self-rule is essential for a peaceful resolution of the Syrian conflict.

When it came to Russia and the incoming US administration, Muslim’s message was quite clear: Syrian Kurds should not be sacrificed on the altar of realpolitik. Muslim appeared to be preoccupied with two issues: whether Trump’s United States will stand with the Syrian Kurds or tilt more toward Turkey, and how Russia will reconcile having Syrian Kurdish allies and relations with Turkey in light of President Recep Tayyip Erdogan's increasing flirtation with President Vladimir Putin.

There are many questions waiting to be answered on the future of Middle Eastern geopolitics after the post-Aleppo and post-Mosul processes. A recent article on the Rudaw website stated the following:

"Political analysts largely think that the Kurds would [stand to] be the biggest beneficiaries of the war against ISIS [Islamic State], but situations on the ground tell a different story. There is now growing fear that the Kurds could fall victim to the interests of superpowers, keeping power balance in the region at their cost.

"In addition, the Kurds are now facing internal problems and could face new challenges after ISIS is destroyed. However, resolving outstanding problems and cultivating unity among Kurds could prevent these challenges."

One conference speaker, David Phillips, the director of the Program on Peace-building and Rights at Columbia University's Institute for the Study of Human Rights, spoke to me about Trump’s possible approach to the Middle East. According to him, Trump will maintain close relations with the Kurds and also be listening closely to the Kurdistan Regional Government (KRG) in Iraq, generally taking Kurdish interests into consideration.

Phillips is an expert on the Middle East and a prolific writer, having penned policy reports and scores of articles in leading publications, including The New York Times, Wall Street Journal and Foreign Affairs. In his book “Losing Iraq: Inside the Postwar Reconstruction Fiasco” (2005), he strongly criticizes Washington’s Iraq policy, and he has lately become a harsh critic of Turkish policies. The title of his upcoming book reveals his perspective: “An Uncertain Ally: Turkey Under Erdogan’s Dictatorship.”

Given the close relationship between KRG President Massoud Barzani and Erdogan, if Trump looks at the Middle East through the KRG's lens, he would likely be accommodating toward Turkey’s regional interests. Such a situation would not bode well for the PYD, which Ankara has tried to paint as a terrorist outfit. Barzani as well appears to be in conflict with Syrian Kurds.

Moreover, nearly every person that Trump has tapped for his administration has anti-Iran sentiments, which could be another sign of Trump’s America keeping Turkey on board. Turkey, after all, is formally an ally and a seeming counterbalance to Iran. If Trump's priority will be finishing off IS once and for all, however, he has to tilt toward the Syrian Kurds, who have been the main fighting force against the extremist group's fighters in Syria.

One widely circulating rumor involves an alleged deal having been reached between Russia and Turkey, or more accurately between Putin and Erdogan, on the Syrian conflict. Ankara's conspicuous silence on the unfolding drama in eastern Aleppo is further feeding speculation. If such a deal has transpired, then Russia may well sacrifice the Kurds’ interests in Syria.

All this is, however, mere speculation. As noted, too many questions are waiting to be answered about the coming era of post-Aleppo, post-Mosul Middle Eastern geopolitics under Putin and Trump’s leadership.