Turkey was shaken by two recent terror acts by PKK-affiliates that killed some 60 people. What is the strategy of the Kurdish movement, and is that strategy sustainable in Turkey and Syria? 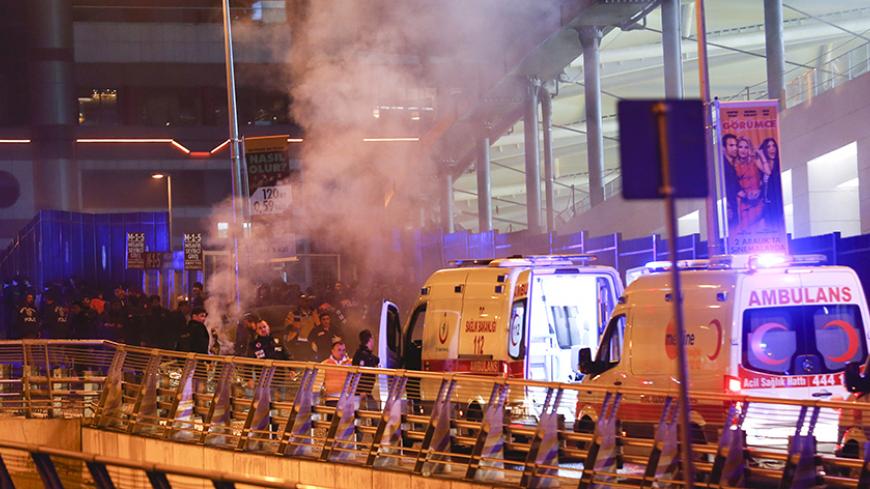 Police and ambulances arrive at the site of an explosion in central Istanbul, Dec. 10, 2016. - REUTERS/Murad Sezer

Two recent bombing attacks that killed 60 people in Turkey were part of a long chain of violence. In 2016, the Kurdistan Workers Party (PKK) and its affiliate, the Kurdistan Freedom Falcons (TAK), carried out 20 bombing attacks in 12 towns, killing 225 people and seriously wounding 1,022. Clashes by the Kurds in Turkey were only one side of the coin. According to official figures, 9,500 PKK militants have been killed since July 20, 2015. In the same period, more than 10,500 Kurds were detained, while 843 security personnel and 335 civilians were killed in PKK attacks.

In the 26 years of PKK operations, from 1984 to 2010, security forces have killed about 30,000 PKK militants. Turkey’s Kurds have seen the bloodiest phase of clashes in the last 1½ years. This period has also been the most pressure the PKK has come under within Turkey’s borders. In addition to the serious casualties it suffered, the organization lost its domination of towns in the southeast, while the state targeted and eliminated PKK camps and bases it had not been able to reach in rural terrain for many years. Parallel to the military pressure, the government has severely restricted the Kurdish movement’s political and democratic spheres. Any kind of civilian and political contact with the Kurdish movement has been instantly criminalized.

Part of the conflict policy of the ruling Justice and Development Party (AKP) is concealed in Turkey’s Syria policy. Through its Operation Euphrates Shield, which was originally declared to be against the Islamic State (IS), Turkey is making military moves to cut contact between the Kurdish cantons in Syria and to limit the Kurdish political sphere, which is deemed to be a threat to Turkey’s interests.

In addition to moves on the ground, Ankara has taken diplomatic steps, such as the recent Russia-Iran-Turkey agreement on Syria. Turkey’s intentions are far-reaching. Al-Monitor’s Fehim Tastekin, in his interview with the daily Cumhuriyet, analyzed the prevailing mood in Ankara as follows: “The state is envisaging a major war against Rojava [Kurdish Syria]. You should not distinguish between the martial-law-like measures inside Turkey with the new plans made for south of the border. Turkey’s strategy is to create a buffer zone there with the jihadi organizations pushed against its border and to use this potential against the YPG [Kurdish People's Protection Units].”

Now the question is: What is the Kurdish movement’s position in face of these moves and Ankara’s plans? What is the Kurds' political strategy? And is that strategy sustainable in Turkey and Syria?

Since 2011, the PKK has been operating in two strategic centers: Turkey’s southeast and northern Syria. The PKK’s main goal was to achieve organizational and political dominance of these two centers, which it defined as a “unified sovereignty sphere.” This ambition was based on democratic autonomy for Turkey and federalism for Syria.

This was the basis of the Kurdish approach to the solution process. The Kurdish movement set up its own judiciary, law and order, and finance bodies parallel to the state authority. It declared autonomous cantons in northern Syria.

Following Kobani’s siege by IS in 2014, the YPG succeeded in securing a standing in the international coalition that was combating radical Islamists. This gave the Kurdish movement significant advantages. When the Kurdish political existence in northern Syria was recognized at international levels, it gained allies and legitimacy.

But critical steps by the Kurdish movement in Turkey were derailed by events in northern Syria. The developments in Syria created major fears on the Turkish side, which couldn’t adapt itself to new conditions; hence, its abandoning of the peace process.

This was the background to the beginning of the most recent phase of the war between Turkey and the Kurdish movement that began in July 2015.

The Kurdish movement launched urban warfare by declaring armed autonomy. Their idea was to implement the Syrian canton model in Turkey. In an interview on Sept. 28, 2015, senior PKK leader Murat Karayilan said, “To transform the democratic autonomous Kurdistan to a reality is a historic step we are pursuing. Eighty percent of Hakkari province is under total control of the guerrillas. The Turkish state cannot enter those lands.”

But this grandiose ambition ended with failure and military defeat in the summer of 2016. Recoiling from the defeat and to show it was still potent, the PKK reverted to hit-and-run actions, especially in metropolitan cities in western Turkey.

Despite its military defeat and the anger of the Kurdish middle class over the destruction caused by urban warfare, the PKK still has a strong social base. In 2015, the Peoples' Democratic Party won more than 10% of the votes nationwide and more than 50% in Kurdish areas.

As well-known experts Vahap Coskun and Cuma Cicek pointed out regarding the PKK’s Turkey strategy, “Unlike Iraq and Syria, Turkey’s central state is not in an existential crisis. There is no nationwide political instability and uprising. There is no likelihood for international forces to intervene. In a NATO member such as Turkey, the Kurdish movement has no rational choice other than to seek a political solution.”

As to the status and policies of the Kurdish movement in northern Syria, day by day Rojava is becoming more vital for the PKK. According to Karayilan, “Turkey cannot succeed with a policy of denying Kurds their status and rights. Today, Kurds control 29% of the Syrian territory at Rojava. Now an assault against Raqqa is on the agenda. If the Kurds capture Raqqa, their territorial holding will reach 40%. Nobody can ignore that.”

Nevertheless, alliances in the region are extremely fluid and constantly changing. The Kurdish movement is looking for its proper place by moving between Syrian President Bashar al-Assad, Turkey, the United States, Iran and Russia. Although regional winds may favor the Kurds, they still cannot anchor themselves to a robust position.

Speaking on Dec. 19 just before the Russia-Iran-Turkey summit, Karayilan said every party is trying to formulate a policy by trying to predict developments in two major issues. First is what US President-elect Donald Trump’s policy will be on Syria and the Middle East as a whole. Second is what the effects of the Moscow summit will be.

Turkey’s goal with the Moscow agreements is to narrow the Kurdish operational space and to rule out autonomy. Whether this is realistic and how political equations will develop in the coming days are not yet clear. What is clear is that the Kurdish movement doesn’t have its earlier freedom of movement. We will have to watch the reshuffling of the cards.