Is Turkey heading to partition?

Turkey is losing Kurdish minds and hearts at a dramatic pace — the first outcome of the war raging in the Kurdish movement’s urban strongholds amid unprecedented destruction and civilian deaths. 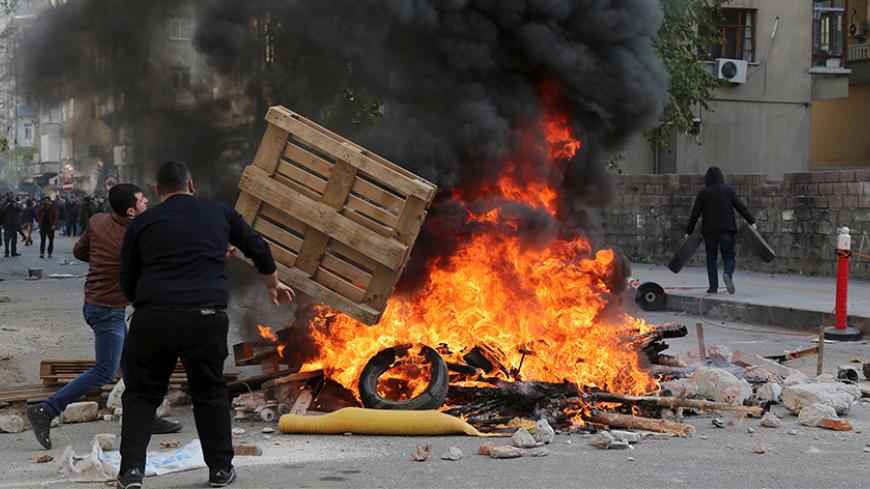 Demonstrators set tires on fire as they clash with Turkish riot police during a protest against the curfew in Sur district, Diyarbakir, Dec. 14, 2015. - REUTERS/Sertac Kayar

“Red lines” have been a fixture in Ankara’s policies toward the Kurds for decades. Blurring or shifting, thinning or thickening, decreasing or increasing, myriad red lines were drawn as Ankara grappled with the painful consequences of the Kurdish problem and sought to keep it under control instead of resolving it. The more the problem became regionalized, the more the red lines crossed borders.

Another such red line was drawn in June 2015 after the People’s Protection Units (YPG), the armed wing of the Syrian Kurdish Democratic Union Party (PYD), seized the town of Tell Abyad on the Turkish border, which allowed it to link the Kurdish cantons of Kobani and Jazira. Ankara’s red line began from the Syrian town of Jarablus, on the western bank of the Euphrates right at the point where the river enters Syrian territory from Turkey, and runs southward along the same bank. The western side of the red line was held by the Islamic State (IS), with the 90-kilometer (56-mile) border stretch from Jarablus westward as the group’s only remaining land link with the outside world.

On the eastern side of the red line, i.e., the Euphrates’ eastern bank, the Kurdish canton of Kobani was controlled by the PYD, the Syrian extension of the Kurdistan Workers Party (PKK), which Turkey is battling on its own territory.

Ankara’s red line was meant to hold back the PYD, not IS. Conversely, if IS had managed to capture Kobani, Ankara would have hardly been annoyed, as evidenced by the partial IS invasion of the city in 2014 when the Turkish leadership showed no sign of discontent. But if the PYD was to advance to the western bank of the river to oust IS from Jarablus — thus crossing the red line — Ankara would have been very much annoyed, for Turkish decision-makers opined that the PYD was there to stay and was thus more dangerous than IS, which they saw as a temporary force in the area.

The rest of the world, however, drew the opposite conclusion from the IS-PYD comparison. In a first since World War II, all major powers were in consensus in diagnosing an urgent and immediate threat to global security, with the threat being IS. In a similar consensus, they saw the secular PYD as the only force that could successfully counter and push back this threat in northern Syria.

As a result, the red line Ankara drew in June managed to survive the world’s realities only until Dec. 25, when the Syrian Democratic Forces, a YPG-dominated coalition including Arab and other local ethnic forces, accomplished their first objective only two days after mounting an offensive against IS south of Kobani on Dec. 23, backed by US air power. The coalition took the strategically important Tishreen Dam, only 70 kilometers (43.5 miles) from the Turkish border, and then got a foothold on the Euphrates’ western bank.

The dam’s capture broke a key link on the route connecting the jihadi capital, Raqqa, to Turkey, which had gained crucial importance for IS after its loss of Tell Abyad. The alternative link for IS now — a route arching from the west of the dam lakes to the southeast — is both longer and risky. If the offensive advances to capture Manbij, a town 40 kilometers (25 miles) from the Turkish border, the territorial link between Raqqa and Turkey will be practically broken, and IS will be isolated along the 90-kilometer border stretch.

With Ankara’s red line breached, the first reaction of Turkish officials was to claim that not the PYD but Arab forces had crossed to the western bank of the Euphrates. Watching how its red lines — the product of misguided policies — lose their meaning in the face of regional realities is certainly not easy for Ankara to stomach.

For the rest of the world, meanwhile, the problem is an Ankara that constantly postpones to do its part in the struggle against IS due to its long-standing Kurdish policy, which has now become a stumbling block for everyone.

One key reason why Ankara saw the PYD as a threat greater than IS was its fear of the geopolitical risks bound to arise if a long stretch of Syrian territory along the border, running westward from Iraq, fell under the control of a Kurdish organization affiliated with the PKK, which is considered a threat to Turkey’s unity. The war against the PKK inside Turkey further magnified these risks for Ankara. Second, Ankara worried that the Kurdish cantons the PYD established would strengthen its own Kurds’ drive for autonomy. Should the Kurdish cantons win recognition as part of a political settlement in Syria, the Kurdish problem in Turkey — home to the largest Kurdish population in the Middle East — will stick out even more prominently as it dies after decades of nonsolution. In short, it was Turkey’s own Kurdish problem that forced it to draw a red line along the Euphrates’ western bank.

The Euphrates represents a separating line not only in Syria but in Turkey as well, marking the historical and geographical epicenter of the Kurdish problem, which stretches eastward from the river. Beyond the massive destruction and civilian deaths in urban areas, Ankara’s war on the PKK since July has also been destroying the emotional bridges over the Euphrates connecting the Kurdish-majority east to western Turkey.

One signal of the breaking bonds came from Diyarbakir, whose ancient Sur district has for weeks been the theater of curfews and clashes, with the security forces battling PKK militants with heavy weapons. On Dec. 26, the Democratic Society Congress (DTK), an umbrella organization for Kurdish civic society groups, convened an emergency meeting in Diyarbakir. Speaking at the gathering, Selahattin Demirtas, the co-chair of the Kurdish-dominated Peoples’ Democratic Party, said, “This resistance will lead to victory. The Kurds from now on will hold the political will in their lands. The Kurds will perhaps have an independent state, a federal state, cantons or autonomous regions.” True to style, the Turkish media highlighted Demirtas’ emphasis on an “independent state.”

The DTK stirred even more indignation in western Turkey the following day with a final declaration that announced “a decision for autonomy” for the Kurds. The 14-point declaration called for the creation of “democratic autonomous regions” across Turkey, to be governed by elected autonomous organs, running the realm of education among others. The other fields it listed for autonomous governance included health services, the courts and justice affairs, transport, energy, public order and budget management.

Though the DTK decision is hardly applicable today, it is significant for showing that autonomy will be the minimal condition the Kurdish movement will impose on any future negotiations for a settlement.

At present, however, even a cease-fire seems a distant prospect. The war will go on. President Recep Tayyip Erdogan has vowed that the PKK militants will "choke in the ditches" they have dug in residential areas to keep the security forces away. Cemil Bayik, the co-chair of the PKK-dominated Kurdistan Communities Union (KCK), responded in kind last week. “No reason exists currently to end the armed struggle. Rather, the civil war in Turkey will intensify in the coming months,” he said.

The Dec. 22 mortar attack on the tarmac of Istanbul’s Sabiha Gokcen International Airport raises the specter of terrorist threats in Turkey’s big cities, emanating from the Kurdish conflict. The attack, which killed a cleaner and slightly damaged five passenger planes, was claimed by the Kurdistan Freedom Falcons (TAK), which has claimed deadly attacks on civilians, including foreign tourists, in previous years. Though the Kurdish movement rejects any links with it, TAK is believed to be nonexistent as a group, being merely a name the PKK uses as a front for terrorist attacks in urban centers. TAK’s claim of responsibility came in a statement, which described the mortar attack as a response to “the fascist assaults devastating Kurdish cities” and “the beginning of our operations in the new period.”

Turkey was ushered into 2016 with pledges of more bloodshed by both sides. In his New Year’s message, Erdogan said 3,100 terrorists “were rendered ineffective” in 2015, and “the security forces will continue to purge both mountains and cities from terrorists, inch by inch.” In its own message, the KCK vowed to keep up the war in the “metropolises” — i.e., the big cities in western Turkey — and mount “a fedayeen resistance unprecedented in the world.”

Sustaining the war between the PKK and the government forces threatens to spiral it out of control for both sides. As a result, whatever the consequences of the grave developments that would take place, Turkey’s real red lines — its borders — might be opened up for discussion.