As the United States appears to be slipping out of the Middle East diplomacy picture, Russia is sharing the spotlight with its ally Kazakhstan in Syrian negotiations. 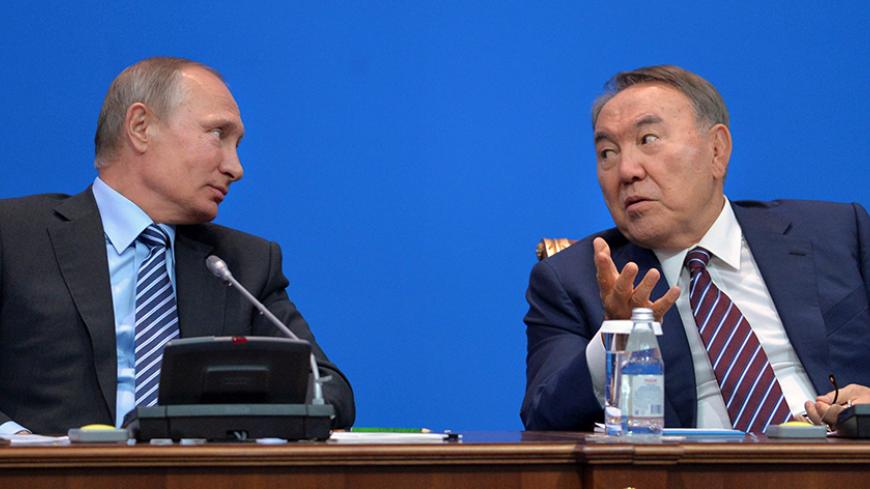 Few people are aware that Kazakhstan played a major role in ending the diplomatic crisis that followed Turkey's downing of a Russian warplane last year. Now Kazakhstan is taking a much more public mediator role in strategic talks among Moscow, Ankara, Tehran and Damascus on Syria’s future.

Last month, Russian President Vladimir Putin said he had agreed with Turkish President Recep Tayyip Erdogan to hold Syrian peace talks in Kazakhstan's capital of Astana. On Dec. 18, after talking to Putin by phone, Erdogan said positive steps have been taken for the future of Syria and the situation in Aleppo, and that talks hosted by Kazakhstan will continue.

Kazakh President Nursultan Nazarbayev said he welcomes the proposal and his country is ready to fill the mediator role. And so, Kazakhstan, which was the discreet facilitator of the Russia-Turkey normalization, has emerged as the active mediator in the Syria issue.

Kazakhstan's relations with Russia are mainly military- and security-oriented, while its ties with Turkey are more about trade and other economic considerations. Kazakhstan has deftly managed a balanced approach to both countries. Both Ankara and Moscow have been pleased with Astana's constructive and risk-averse attitude.

How did Kazakh diplomacy emerge as a successful endeavor in recent months? Political science doctoral student Kerim Has of Moscow State University believes that in addition to Astana’s tactful handling of Ankara-Moscow issues, Nazarbayev is considered a “wise man” by Turkish and especially Russian political leaders.

“Among the former Soviet republics, Nazarbayev has never lost his standing as the one who has the best relations with Putin based on mutual trust. No one can question Putin’s respect for him. When I was in Moscow during the first days of the crisis, Russia experts had already told me that the only person who could be a mediator was Nazarbayev,” Has told Al-Monitor.

Kazakh diplomats made efforts to display their neutrality to the international community during the country's successful bid in June for UN Security Council non-permanent membership and also during its dealings with the Organization for Security and Cooperation in Europe. For Astana to become the venue of Syria negotiations complementing the Geneva talks is yet another success for Kazakh diplomacy. Has said those who follow developments in Syria will be hearing plenty about Kazakhstan in the coming days.

Has added that shifting the talks to Astana, the capital of a strong Turkish ally, has another significant aspect not readily apparent to many people, which is to restrain the emerging dominant role of Iran in the region.

Therefore, for Russia to initiate Astana talks goes beyond promoting Kazakhstan as a neutral venue, by using it to manage the sensitive Iran-Turkey balances. Now Iran is expected to come up with gestures that would appeal to Moscow. For example, it could reopen its air bases to Russian aircraft, which Moscow would definitely appreciate. In a way, the results of Syria talks in Astana will be best observed not in the diplomatic arena, but by changes that could occur on the ground.

It is clear that Moscow is pursuing serious diplomatic moves on critical issues such as the future of Syria, balancing Turkish-Iranian interests and engaging allies, while the decision-making mechanisms of the United States are practically paralyzed until Jan. 20, when President-elect Donald Trump will be sworn in. Russia will try to institutionalize the Astana talks before Trump takes over. Will Trump be pleased with this fait accompli, or will he try to wreck it?

Washington would do well to gear itself up for Russia's rising influence in the coming days. The United States should not forget how Russia has cleverly scored world diplomacy points in working to resolve the Syrian crisis. Russia also improved its relations with Turkey following the attempted coup, while Turkey believes that instead of helping, the European Union and NATO rather criticized Turkey for its mass arrests.

If Turkey decides to push the idea that US-based Turkish cleric Fethullah Gulen was an accomplice in the recent assassination of Russia's ambassador (as well as the coup attempt), how deeply will Moscow get involved in the Gulen controversy between Ankara and Washington? Will Washington, which refused to extradite Gulen to Ankara after the failed coup, do so now if Moscow requests it?