For President Recep Tayyip Erdogan, the steep decline of Turkey’s national currency is an “economic sabotage” by the nefarious powers that were also behind the coup attempt of July 15. 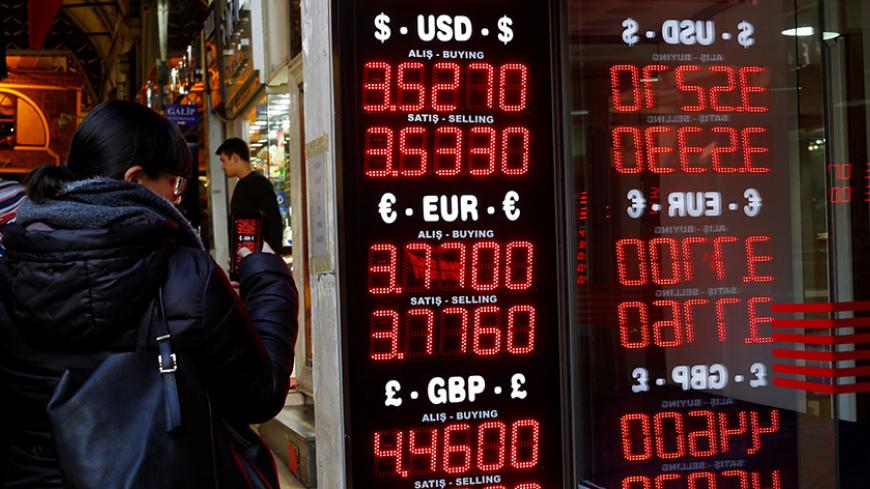 A woman uses her mobile phone to take a picture of a display board at a currency exchange office at the Grand Bazaar in Istanbul, Turkey, Dec. 5, 2016. - REUTERS/Murad Sezer

The bloody coup attempt on July 15 was a real attack on Turkish democracy, which the nation heroically averted. Yet the attempt still had detrimental effects on Turkey, such as initiating an excessive post-coup crackdown. Moreover, it intensified the paranoid political psychology among the ruling elite, in which every problem Turkey faces is seen as yet another nefarious “coup attempt.”

An impartial observer of the Turkish economy could explain this trend with comprehensible factors: The post-coup crackdown and the tension with the European Union reduced the confidence in the Turkish economy, while the global increase in the value of the dollar added to the problem. In fact, there are various economy experts writing in the Turkish media and in Al-Monitor who explain the problem exactly like that: Turkey’s own domestic troubles combined with global trends.

President Recep Tayyip Erdogan, however, prefers a different explanation. In a public speech on Dec. 4, he declared, “Someone is trying to force this country to its knees by economic sabotage after failing to seize it with tanks, guns and F-16s on July 15.” This is not a new game, he added, noting, “Especially in the last three years, they are constantly attempting to use economic crisis as a trump card.”

The identity of “they” was not very clear, as is often the case. Erdogan’s supporters, however, have their usual suspects to fill in the blanks: conspiratorial cabals in the West and their collaborators at home. Hence, dozens of statements came from the members of the ruling Justice and Development Party, and dozens of “news” reports and columns have lately appeared in the pro-government media, condemning the “economic coup attempt” and pointing to the “traitors” who supposedly take part in it, such as TUSIAD (Turkish Industry and Business Association), the nation’s most prominent business organization.

Yet there was something a bit hard to explain even from the vantage point of this conspiracy theory. In the past couple of months, there has been a consistent pattern: The value of the dollar went up whenever Erdogan spoke on the economy and reiterated his belief in keeping the interest rate of the Turkish lira low. An impartial observer could think that there was a correlation in the sinking of the national currency and Erdogan’s insistence in low interest rates.

But, alas, that explanation would be persuasive only for the feebleminded who cannot map out the vastness of the conspiracy. The conspiracy was exposed by a columnist for daily Sabah, the flagship of the pro-government media. First, he asserted that “the dollar operation” against Turkey was mastered by George Soros, an American businessman and philanthropist, along with the “traitors among us.” The target of the conspiracy is nothing but toppling Erdogan, the columnist explained, writing, “Right at the moment when the Chief [Erdogan] speaks, the Soros funds get into action and the dollar immediately goes up. They want to create the impression, ‘The dollar went up because Erdogan spoke.’”

This logic, which one can see literally every day in the pro-government media, makes Erdogan the ultimate “Teflon president.” No criticism sticks to him, in other words, because every problem that could be explained as his responsibility is rather explained as a conspiracy against him. The perception of conspiracy, in fact, further boosts his popularity and the mass mobilization in his base.

This mobilization is now visible in the way Turkey responds to the “economic coup.” While condemning this new attack on the homeland, Erdogan also called on his people to sell their US dollars and euros and buy Turkish liras or gold. Many people and institutions seemed to heed that call. Turkey’s main stock exchange, Borsa Istanbul, converted all its cash assets into liras a few hours after Erdogan’s remarks. Some companies followed the line. The Directorate of Religious Affairs also announced that pilgrimage visits to Mecca would now be charged in liras rather than in dollars or euros as before. A man in Bursa, a northwestern province, promised to give free tombstones to those who sold their dollars and bought liras. Some people went even further and organized “dollar-burning” sessions in order to make a patriotic statement.

In other words, Erdogan has really been able to define Turkey’s economic challenges as a plot against the nation. This certainly helps to stoke nationalist emotions and maximize support for the government. Whether it will really help Turkey solve its economic problems remains to be seen. What also remains to be seen is what will happen if the nationalist mobilization cannot solve those economic problems and gets even more agitated against the perceived “traitors” within.