Is Turkish President Recep Tayyip Erdogan’s surprising call for national mobilization a tool to eliminate objections to his executive presidency? 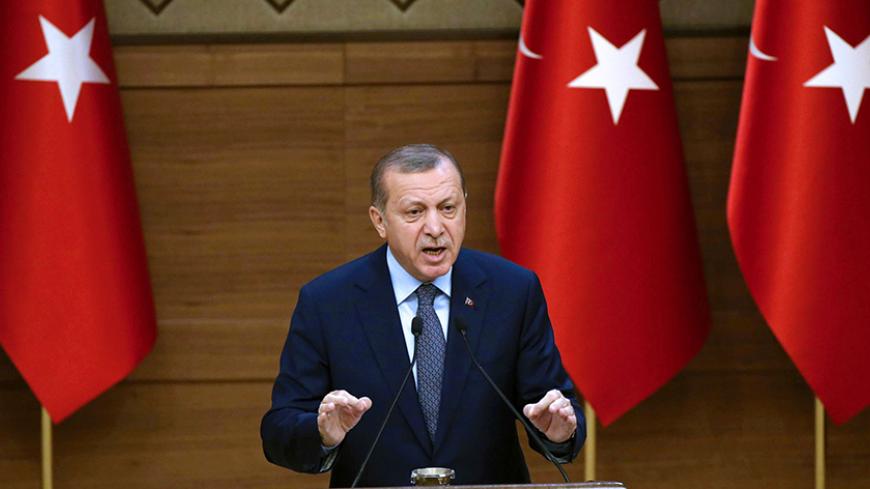 “From here I am calling on all my compatriots. As the president of the Turkish Republic, according to Article 104 of our constitution, I am hereby declaring a national mobilization against all terror organizations, whether they are called PKK [Kurdistan Workers Party], Daesh [Islamic State (IS)], FETO [the so-called Fethullah Gulen Terror Organization, a term Ankara uses to refer to Gulen followers], DHKP-C [Revolutionary People’s Liberation Party-Front] or whatever,” he said.

A heated debate followed on what his words meant and to what he was alluding. According to the constitution and law on mobilization, to declare mobilization “there must be a situation that would require war; a strong and active uprising against the republic or internal or external actions that would threaten the integrity of the country and the nation.”

According to the law, the decision for national mobilization is made by the Council of Ministers, which is chaired by the president, and is immediately submitted to the approval of the national assembly.

Once mobilization is approved, then it is possible to declare martial law in the entire country or its parts. The Turkish Armed Forces (TSK) can be put on alert, all state bodies will take war-like measures, reserve soldiers can be mobilized within seven days and the state can seize assets belonging to public and private persons.

The common understanding is that national mobilization is a transition to a status of war that would allow the TSK to launch war against other states, adhering to the Geneva Law of War. The mobilization against organizations listed by the president also means that the Geneva accord will be applicable in the struggle against these organizations.

According to an assessment by law professor Ersan Sen on CNNTurk TV, the constitution distinguishes between war, mobilization, state of emergency and martial law. Declaration of war requires a decision by the parliament. Noting that mobilization means putting the army on a war footing, “That means status of war. Declaration of war is made against another state. You cannot declare war against terror organizations,” he said.

Engin Altay, the vice chairman of the parliamentary group of the main opposition Republican People’s Party (CHP), held a press conference to voice his criticism. Altay said Erdogan with his declaration had claimed that Turkey was at war. “We don’t agree. States fight other states, not terror organizations. Such a declaration of mobilization will help the PKK to gain legitimacy in international opinion,” he added.

Ayhan Bilgen, a spokesman for the pro-Kurdish Peoples’ Democratic Party (HDP), said the constitution does not empower the president with such an authority. “The constitution clearly sets out who can declare mobilization and how. He declared mobilization in a meeting with village headmen and created a de facto situation. Legality will be worded to justify it later. This is only the beginning of the campaign for the executive presidency and the referendum,” he said.

Dogu Perincek, the chairman of the Homeland Party, which supports Erdogan, recalled that his party had raised the need to declare mobilization last year. “As the Homeland Party, we spearheaded the way to national mobilization. Turkey faces internal and external threats that it will overcome. The United States is goading the PKK, FETO and [IS] against Turkey,” Perincek said.

When Erdogan’s declaration triggered critical questions about whether Turkey was heading into a direct war against Syria and Iraq, the president had to step back and clarify.

Erdogan’s senior adviser Mehmet Ucum told Turkey’s private HaberTurk television, “The president’s national mobilization call is not a legal matter," while also saying the constitution allows mobilization. "The council of ministers will meet under the president, and if the conditions so require, mobilization will be declared in entirety or parts of the country. The current debate is irrelevant. It should be seen as national sentiment.”

Erdogan felt a need to respond to negative perceptions inside and outside the country. “This is a supreme call for national solidarity. All my mukhtars know best who lives in their villages, neighborhoods; who are the outsiders. They have to help our struggle in combating terrorists by reporting such presence to authorities,” he said Dec. 15.

One interesting comment on the debate came from professor Baskin Oran, who said Erdogan’s declaration was “not for mobilization but for informing [snitching].” Oran said the declaration of mobilization is regulated by Article 122 of the constitution. “Erdogan is talking of Article 104, which pertains to duties and powers of the president. It has nothing to do with the mobilization. He is actually issuing a call to mobilize informers,” he added.

Amid the ongoing emergency rule, the call for national mobilization actually aims at suppressing and silencing criticism and reaction to the parliamentary process on amending the constitution for an executive presidency system. This why the rulers affix the labels of “national” or “indigenous” to every concept to encourage the society to accept a Turkish-style presidency without objections.