Turkey's Sirnak now nothing but rubble

The nine-month-long curfew on Sirnak was lifted after security forces cleared the trenches, barricades and booby traps of the PKK urban warfare units. But Sirnak is now one big pile of rubble. 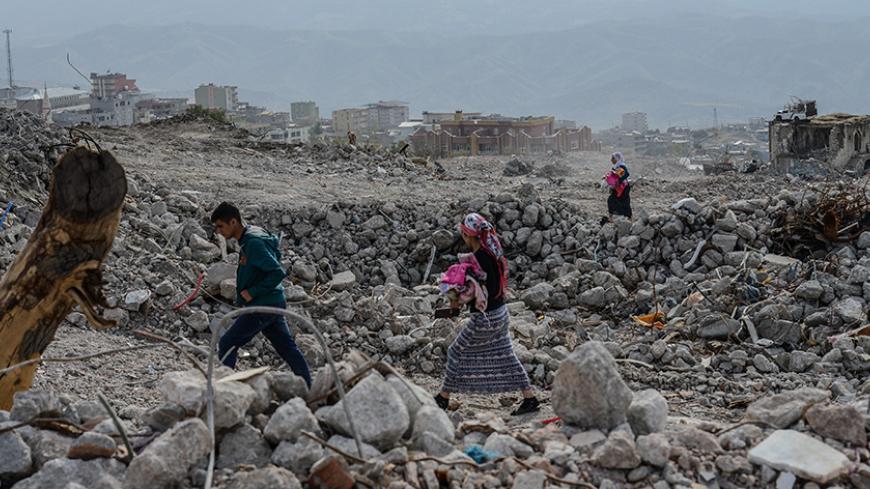 The small town of Sirnak in Turkey resembled a large, dusty village administratively attached to Siirt province when it was made a provincial center in 1990. It eventually became a focal point of Turkey’s struggle against the Kurdistan Workers Party (PKK), always staying in the headlines while the trenches were dug and barricades erected by the PKK’s urban warfare outfit, the Civil Protection Units (YPS).

A curfew was imposed on Sirnak on March 14, and a massive operation was launched to oust Kurdish militants. The operation lasted 80 days, but the curfew remained in place for nine months mainly because buildings damaged in the security operation were collapsing. It was initially thought that only a few buildings would need to be demolished, but a count after the lifting of the curfew determined that some 2,044 buildings were unusable.

Sirnak residents trickled back home after the curfew was lifted, but they were shocked with what they found and couldn’t find. The town had been leveled to nothing more than mounds of rubble. People had no choice but to try to find what was left of their homes.

Walking over the rubble with his friend Celadin Baran, Sait Batmaz searched for his house. The two argued over whose house they were standing on. Baran said it looked like his house at first, but by using an unaffected landmark building, he was able to find what was left of his place — a few pieces of iron and a bit of rubble.

“My house is gone. I am staying with my brother. My house was burned down with everything in it,” a deeply shocked Batmaz told Al-Monitor.

Finally, Baran also located what was once his house. Nine months ago, before he left Sirnak, Baran was a well-to-do merchant. He had 13 houses and five shops. Watching construction machinery work on his rubble, Baran said he had left Sirnak and went to Uludere with five of his children.

“I rented a house there for 150 Turkish lira [around $42]. I had no work. There was only the smuggling business, but we had no access to that," he told Al-Monitor. "Now I am back. I have nothing left. Thirteen houses and five shops all burned to the ground. With six siblings, we have nothing left. In this rubble we had 10 flats. All destroyed. We had a three-floor house in the shopping area; that is gone too. The state doesn’t pay our rent.”

Now sentenced to poverty, Baran found it hard to express his feelings. He watched the rubble-removing machines at work for a while and then walked away. At that moment, a man approaching near us said, “We are all guilty for this,” and then he walked away quickly before we could ask him anything.

As the rubble was removed, it was clear that all belongings and furniture had disappeared. The Kurdish Peoples’ Democratic Party (HDP) alleged that any remaining furniture was given to companies clearing the rubble — officials didn't confirm this, and no clues were found to verify it. Regardless, how could one believe that anything usable was left behind in buildings that no longer exist?

Still, people are trying to recover whatever they can. One woman digging for pieces of wood identified herself as Kevser Aydin. She told us they had escaped even without taking their children's clothing. Her task now is to collect wood to stay warm in the coming winter. She said she is living in a house she rented with her seven-member family.

“All our belongings are gone. We are digging around for whatever we can find. The wood we need for the winter because we have nothing else to heat our house with. We had a fully furnished three-floor house, and now nothing,” she told Al-Monitor.

Yasin Yilmaz was also trying to recover wood from the rubble of his house. He had searched for a long time for his house with no luck until he enlisted the help of the town’s old-timers who helped by making use of land features and trees. “We saved ourselves by escaping. My family is scattered all over. Some are in Mersin, in Siirt and Guclukonak. We have been away for nine months," said Yilmaz. "Now we are back, and we can’t even find traces of our residence. We have some rubble, but not walls. We only hope we can recover some wood to use for heating.”

Sirnak looks like flat land. Only a few mosques remain standing in the city center, but even they are badly damaged.

A few lucky people found houses to rent. Others continue to live in tents they moved to nine months ago when the curfew was imposed.

Hazal Kozuman, who has been living in a tent for nine months, said all 20 houses belonging to her family were razed.

“We have no house; they razed our building. Children are scattered all over — we will spend the winter in the tent. There are no more relatives’ houses we can take refuge in,” she told Al-Monitor.

This is the new Sirnak: tents, rubble and splintered families. You get a feel of the new Sirnak when you enter the town. The permanent checkpoints erected at the town’s entrance resemble Iraq. When asked to register when entering your own town, you feel as if you are entering a foreign land. Some people hold the PKK responsible for the destruction, saying, “If they hadn’t brought the clashes to the city center, this wouldn’t have happened.”

Some blame the state, saying it overreacted to the trenches and barricades. Whether or not a conclusion of these recriminations occurs, the reality is that Sirnak has been turned into rubble, thousands of people are homeless and the future is uncertain.