Scrambling to overcome a foreign exchange crunch, Turkey’s government has outlined incentives to prop up exporters, and while Middle Eastern markets figure high on the target list, Ankara’s political conflicts with neighbors present an obstacle that needs to be addressed. 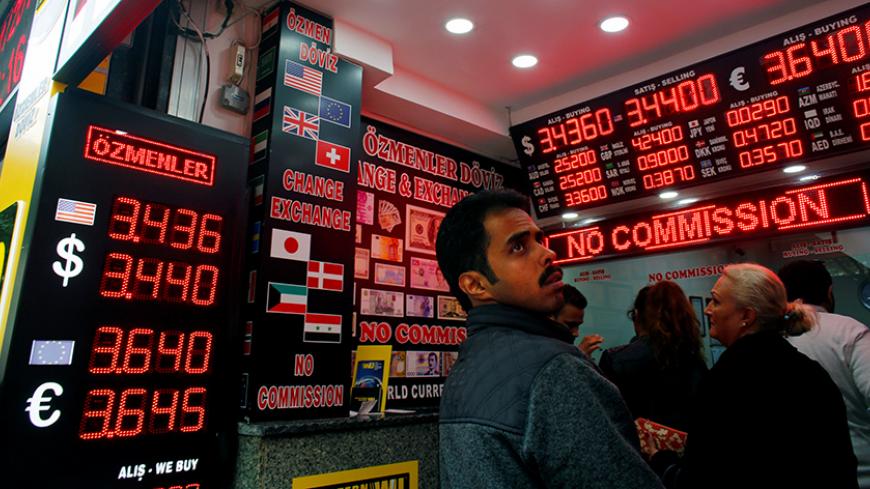 The turbulence in the Turkish economy, marked by a dramatic depreciation of the Turkish lira, is forcing Ankara to consider emergency measures. While President Recep Tayyip Erdogan led a campaign against the threat of dollarization, the government last week unveiled a package of measures to appease and buoy up economic actors. With the domestic market expected to shrink, the measures focus on encouraging exports and overseas contracting. As part of this drive to open up abroad and generate foreign exchange, the potential of Middle Eastern markets is remembered anew. Turkish traders and contractors had performed impressively in the region before wars and political conflicts hit economic ties. Whether and how they can revive that performance are issues with both economic and political question marks.

Erdogan’s call on citizens to convert dollar assets to Turkish liras appeared to bear fruit for a couple of days last week, but after regaining some ground against the dollar, the national currency began to slide again.

Prime Minister Binali Yildirim announced that some $10 billion had been converted to Turkish liras as part of the campaign, but soon it became clear that the shift was driven not by citizens, but by state banks and other public institutions converting their foreign exchange reserves to Turkish liras. After an initial retreat, the dollar rose again, fueled mostly by foreign investors exiting the Turkish stock exchange. The official sell-off figures were not yet announced at the time this article was written.

The sell-off seems to have been driven by the relative decline of the dollar price. How? Short-term foreign investments in Turkish stocks and government bonds amount to about $61 billion. These investments, however, are made in Turkish liras, and when investors want to go, they tend to await the right moment with more favorable exchange rates. Hence, the retreat of the dollar provided such a window of opportunity.

Deterring foreign investors from leaving Turkish markets is not the only option in overcoming the foreign exchange deficit. Earning foreign exchange is another way to battle the crunch, and that’s what led the government to outline a series of incentives for exporters.

Announcing the measures after a meeting of the Economic Coordination Board on Dec. 8, Yildirim said, “Companies need cash on the market. We are creating a credit line of up to 250 billion Turkish liras [$72 billion] … to ease the cash crunch and even boost employment. It’s a new fund to overcome the cash crunch of exporters and small- and medium-sized enterprises.”

As a country hit by a foreign exchange deficit, Turkey has indeed neglected exports as a way of generating foreign exchange. In the 2010-2015 period, the average worth of exports was $142 billion per year while imports were $227 billion, meaning an annual average deficit of $85 billion. The biggest deficit in this period — $105 billion — was in 2011, while the smallest — $63 billion — was in 2015 under the impact of falling energy prices and the country’s weakening economic growth.

Amid a continued slowdown (growth is expected to be 2% this year), the deficit will decrease a bit more, but it obviously remains an acute problem that needs to be tackled. Tourism revenues alone cannot heal a foreign trade deficit of $85 billion per year, covering only a fourth of the gap. Thus, Turkey continues to be a fragile economy with a chronic current account deficit. Its maneuvering room is further narrowed by a $421 billion external debt stock, the result of both short-term borrowing and bank loans to cover the gap, which means a debt burden of nearly 60% of gross domestic product.

In short, the country was late in remembering exports — but as the Turkish proverb says, “No matter where you cut on losses, it’s a gain.” If the European Union is the first region to be targeted with the export incentives, the Near and Middle East is the second, being a market where Turkey had once had good economic ties and is now compelled to remember.

In the 2010-2015 period, Turkey’s imports from Middle Eastern countries were worth $18.5 billion per year, while its exports amounted to $33 billion, meaning an annual foreign trade surplus of nearly $15 billion.

Turkey began to focus on the region in 2003, which led to the trade volume surging from $9 billion to $64 billion in 2012. Turkey’s increased energy exports from the region played an important part in the staggering 611% increase, but the importance it placed on Middle Eastern markets was equally effective, as evidenced by the fact that Iraq became the second-largest market for Turkish exporters after Germany.

Here’s how things stand today, according to the latest available data: In the first 10 months of 2016, Turkey’s trade volume with the Near and Middle East region amounted to about $36 billion, or 13% of its total $280 billion foreign trade, which is hardly a satisfactory figure.

With an $8 billion bilateral trade volume, Iran is now Turkey’s top regional partner. Due to the fall in global energy prices, Turkey, which buys gas and oil from Iran, has secured a $600 million net export advantage against its eastern neighbor. The United Arab Emirates is another major partner, with $6.5 billion in bilateral trade and a $1 billion advantage in Turkey’s favor. Trade with Iraq has notably declined in recent years, but the country remains high on the list, buying $6 billion worth of Turkish goods, which makes it Turkey’s third-biggest market after Germany and Britain. Saudi Arabia and Israel are two other regional countries that stand out, importing $2.5 billion worth of Turkish goods each in the first 10 months of the year. In total, the five Middle Eastern countries mentioned above account for 72% of Turkey’s $36 billion trade volume with the region.

The upward trend in oil prices, decreasing war expenditures and Iran’s warming ties with the West mean that Turkey stands a chance to boost its regional trade. This, however, is only a potential. To make it a reality, Turkey needs to improve its political ties in the neighborhood, and regional countries need to tackle their own economic and political problems to rise above annual growth rates of some 3% projected by the International Monetary Fund for the region.

Direct investment presents another major potential for Turkey. The direct investment in Turkey from the region is worth no more than $2 billion. Attracting more regional investment to Turkey, expanding cooperation in the tourism sector and boosting the volume of construction projects could also come to the agenda in the coming days if peace efforts in the region bear fruit. It all depends on the establishment of peace, cohesion and a mutual spirit of cooperation.