As Lebanon tries to build walls, Palestinian initiatives traverse them

As the Lebanese army and Palestinian officials in the country are debating the issue of the now halted construction of a wall around the Ain al-Hilweh camp, other Palestinians are launching civil initiatives to raise awareness about the refugees’ future. 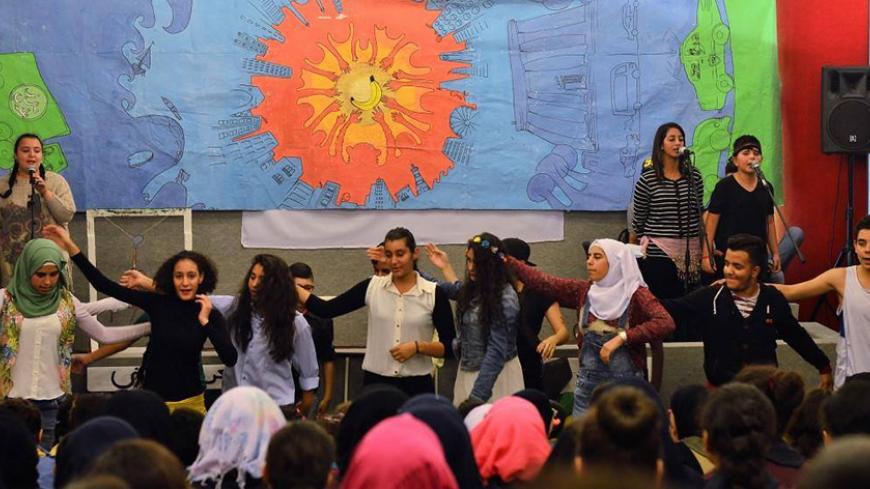 The Yaabad Scout group performs their play "All Because of a Banana" in Saida, Lebanon, Dec. 4, 2016. - Facebook/Qattan Foundation

BEIRUT — The Lebanese army has started building a wall around Ain al-Hilweh, perhaps the country’s most restive Palestinian refugee camp, located in the southern city of Saida. Walls — like borders — come laden with symbolism, not least for Palestinian refugees.

Although now on hold, construction on the Ain al-Hilweh wall reportedly got underway at the end of November with the blessing of Palestinian factions inside the camp following months of tension between the Lebanese army and armed factions within. A local Hamas official commented that the wall “aims to decrease the confrontation between [Ain al-Hilweh’s] inhabitants and the army.” Many camp residents didn’t see things that way, though, drawing comparisons to Israel’s “separation barrier” in the occupied territories.

However, while some build walls, others traverse them. As all this was being discussed and debated on social media, on Nov. 27, a bus carrying two dozen children from Shatila camp’s self-organized Palestinian Scout troupe, Yaabad, was bounding its way down the coastal highway to Saida.

The Yaabad Scout troupe came to Saida to begin a performance tour of their play, “All Because of the Banana,” devised in partnership with Seenaryo, a small British-run nonprofit that produces participatory arts projects with Syrian and Palestinian refugees across Lebanon. The play premiered in Shatila’s Yaabad school in August.

The play tells the story of a city in demise as the children portray the lives of families struggling to eat, work and get by. As the situation worsens, the characters become increasingly obsessed with bananas, which are used as a symbol of greed, self-interest and individualism. The moral of the story is that working together benefits everyone in the community.

After the Nov. 27 performance in Saida, the Yaabad Scout troupe took the play inside Ain al-Hilweh on Dec. 4. Several performances around Lebanon are also in the works.

Husband-and-wife Scout leaders Jamal and Mona al-Hendawi lead the project, and the whole family brings their own roles and skills to it. Their eldest son, university student Jihad, became a facilitator by leading script-writing workshops and helping the children devise the direction of the play. Their other son, Nidal, also trained by Seenaryo, now does the lighting for each performance. Their two daughters, Farah and Hanan, both act in the play.

The Hendawis want to share their production with Palestinian communities around Lebanon.

“It was a new thing for me,” Jihad told Al-Monitor, describing how he became heavily involved in the project because of his English and communication skills. “After doing more projects with Seenaryo’s team, I … started helping children express their imagination and I got more and more involved in the directing and devising process.”

Jihad said the project provides children with a “new, fun experience,” as well as “more possibilities for their future lives.”

Jamal, Jihad’s father, described the opportunities that drama provides to the children in similar terms. Speaking inside their Shatila home, the Scout leader and part-time actor said that although “our Palestinian experience impacts us every single day,” the family has tried to make the Yaabad Scout troupe something that unites children and prepares them for alternative futures that weren’t necessarily available to the camps’ older generations.

“If you give people something to care about, they’ll become scared to lose it and so won’t be distracted by negative things,” Jamal told Al-Monitor. “That’s the whole idea with Yaabad … to get the biggest group of boys and girls and work with them to see what their hobbies and ambitions are and to work on positive projects with them.”

Jamal added that it can work both ways. Performers grow in self-confidence after being observed by peers who recognize their skills, and the audiences learn about different activities and art forms that they might not have been exposed to before. Jamal believes in the power of art to change people.

“Finding out that you have a skill — whether it’s dabke [folk dance], singing, acting — gives you confidence and makes you feel better about yourself,” he said. "This also reflects not just on the performers, but the people who are watching it. Seeing art opens people’s minds to new things, and so it helps them think about themselves and their dreams."

The “Palestinian experience” in Lebanon that Jamal refers to is, of course, full of challenges — not least the system of socio-economic and legal exclusion that was gradually established in the wake of the 1948 Nakba, when at least three quarters of a million Palestinians were displaced and rendered stateless by proto-Israeli militias and the ensuing Arab-Israeli war.

While Shatila’s older generations experienced war and, infamously, the 1982 massacre of more than 3,000 Palestinians by the Israeli-backed Lebanese Christian Phalange militia, today's children and teenagers face new hardships. In the latest reminder of Shatila’s poverty, stories are circulating that increasingly powerful drug dealers inside the camp have started recruiting children, sometimes by selling drugs outside schools or actually handing out sweets laced with narcotics, to create a new generation of addicts and foot soldiers.

Other grass-roots Palestinian initiatives are also taking matters into their own hands. In November, a group of young Palestinians launched Campji, a youth citizen journalism initiative communicating “from camp to camp … revealing our stories, our culture and our talents,” according to the initiative’s new Facebook page. Also in November, in the Burj al-Shemali camp in south Lebanon, two Palestinian teenagers unveiled an aerial mapping project, using balloons and a camera to craft a map of the camp. The project is intended “to encourage our youth,” said the leader of a camp youth support group.