The Kurdish people have been celebrating Donald Trump's victory in the US presidential elections in many different ways, in the hope that his presidency will bring more support for an independent Kurdistan. 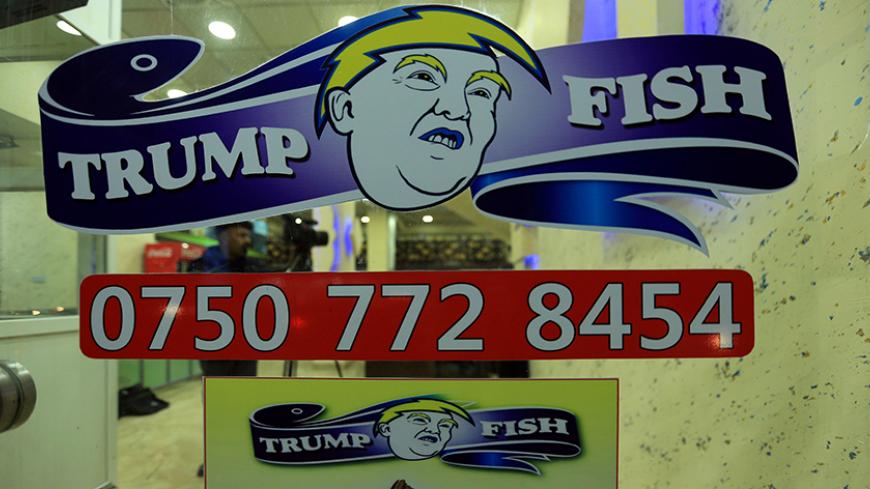 A restaurant named Trump Fish is seen in Dahuk in the Kurdistan Region of Iraq, Dec. 11, 2016. - REUTERS/Ari Jalal

BAGHDAD — A restaurant owner in Dahuk province in the Kurdistan Region of Iraq named his restaurant, which opened one week after Donald Trump won the US presidential elections, after the president-elect.

Many Iraqis reveled in Trump’s victory, which went viral on social media in Iraq. Some Iraqis have gone so far as naming their newborns after the incoming US president.

The father of a baby boy, who was born into a Kurdish family in Dahuk, named his child Trump. He said he supports Trump for his supportive positions vis-a-vis the Kurdistan Region.

This unprecedented jubilation in Iraq with Trump’s Nov. 8 victory is in response to Trump's support for the Kurdish people, as seen in June statements by Trump Middle East policy adviser Walid Phares. Phares said Trump is a close friend of the Kurdish people and has always endeavored to strengthen relations between Washington and the Kurds. He added that Trump, as president, will not object to any US decision that is in the interest of the Kurds, including secession and independence.

The seemingly spontaneous pro-Trump celebrations in Dahuk and other provinces in Iraqi Kurdistan are a means also to draw media attention and to attract foreigners to restaurants and other places of leisure bearing the name of Trump.

Nidiar Zawiyati, the owner of the restaurant in Dahuk, told Al-Monitor, “I named my restaurant [Trump] out of enthusiasm, without any political objectives.”

He believes the restaurant's name has helped attract customers because of the extensive controversy stirred by Trump’s victory. He said foreigners who reside in the area have been frequenting his restaurant as well as locals.

It appears that the Kurdish people are not aspiring only for military and economic support from the Trump administration, but are pinning their hopes on the new US president to help them in their quest of secession and independence.

Kurdish political analyst Mahamad Zangana told Al-Monitor, “Some Republicans are hoping the situation in [Iraqi] Kurdistan will change based on Trump's statements, reflecting his support of Kurdish independence as well as the Kurdish [peshmerga] forces fighting against the Islamic State.”

He said that the Kurdish people are confident that the United States under Trump will treat them more favorably than during Barack Obama's presidency. “Some citizens are naming their shops or newborns after Trump in order to tease the haters of the Kurdish people and the naysayers to independence,” he added.

Zangana stressed that the US administration has priorities and that it may provide Kurdistan with indirect support. “Washington has maintained contact with Kurdish leaders and parties under all circumstances, and has always been present on the ground. I think the perspective will change this time and the Kurdish dream will come true under the new [US] administration, which will deal more favorably with the issue of Kurdish sovereignty, without directly supporting Kurdish independence. The new US administration will force the region to recognize Kurdistan’s independence.”

In turn, the Kurdistan Regional Government (KRG) seems optimistic about Trump's presidency, and is betting on more US support for Kurdistan and more pressure on Baghdad regarding the pending issues between the KRG and the federal government.

Masrour Barzani, the chancellor of the Kurdistan Region Security Council, said during a visit to Washington on Dec. 8 that the new US administration under Trump is likely to increase aid to the KRG and take another position if Baghdad continues to marginalize the peshmerga forces.

Rudaw media network quoted Barzani saying, “We came here to thank the current administration for its support and assistance to the Kurdish people, and to get to know the new administration, from which we expect more support for the peshmerga forces.”

Barzani added, “We talked to a large number of advisers in the new US administration. All of them confirmed their support for the Kurds and promised to provide more aid.”

These US and Kurdish statements reflect the understanding and harmony between Washington and the KRG, as well as obvious US support for the independence of the KRG. Kurdish citizens seem to take these statements very seriously, as they see Trump as the man who will make their independence dream come true.

Hozan Nagda, a student at the American University of Iraq-Sulaimaniyah, told Al-Monitor, “We welcome any external support for the Kurdish independence cause. The [jubilant] reaction was an expression of gratitude to President Trump, because he put the Kurdish issue among his priorities. The Kurdish community has acted upon Trump's comments, and we hope that he will fulfill the promises he made during his election campaign.”

He said that Trump's statements fueled the Kurdish support for his policies and created a sense of joy about his victory, since Kurdistan has been dreaming of independence for decades, and especially at this time, as the financial crisis has destroyed the KRG infrastructure and weakened its regional and international position.

The fact that the Kurds are naming their children and shops after Trump is an expression of gratitude for the positions of the US president-elect, who has rekindled their hopes for secession and independence.

But despite the desire of the new US administration to provide more support to Iraqi Kurdistan to realize its dream, this will remain far-fetched if it is not coupled with reforms allowing the Kurdish parliament, suspended for more than a year, to resume its activities, and if the KRG does not abide by the constitution and and the rules of democracy.