Palestinians believe that the Israeli regularization bill, designed to authorize settlements built on Palestinian lands, serves as a "smoking gun," proving that Israel is not interested in negotiations. 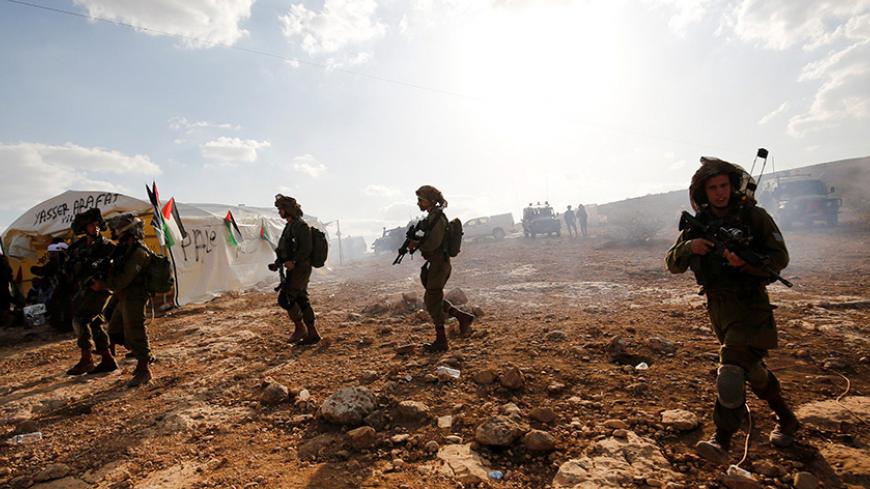 Israeli soldiers take position during a protest against Jewish settlements in the Jordan Valley near the West Bank city of Jericho, Nov. 17, 2016. - REUTERS/Mohamad Torokman

No one in the office of Palestinian President Mahmoud Abbas was surprised by the Knesset’s Dec. 5 preliminary approval of the proposed legislation known as the regularization bill, legalizing wildcat West Bank settlements — which would allow Israel to take control of private Palestinian lands.

For many months the Palestinian Authority (PA) has been closely following the convoluted progress of the proposed bill in its various incarnations, and while publicly condemning it, they understood that if OK'd by Israeli lawmakers, the “parody bill” — as they’ve dubbed it — has an upside.

The “whitewashing” of unauthorized settlements established on private Palestinian land — after paying compensation to the Palestinian landowners — would be a de facto declaration of war by Israel and generate widespread Palestinian unrest. On the other hand, the Palestinians would be handed what they call a “smoking gun” on a silver platter: ultimate proof that Israel is intent on annexing the occupied territories and not on peacefully resolving its conflict with the Palestinians anytime in the foreseeable future.

Final passage of the bill would also likely result in an overwhelming, forceful eruption of international public opinion against Israel’s expansion policies. A Nov. 29 Peace Now report says such a law would retroactively validate some 4,000 structures built on private Palestinian land. Of these, 2,744 are permanent structures and 1,177 are mobile homes and prefabs. According to the report, 3,125 of these are located in settlements, and almost 800 in illegally erected outposts. According to the Peace Now data, the law would concern 72 settlements and legalize 55 outposts. In all, the law would enable the legal expropriation of some 8,000 dunams (3 square miles).

“This is much more than the international community will be willing to put up with,” a senior Fatah official recently elected to the movement’s central committee told Al-Monitor on condition of anonymity. “This is a tsunami of settlements that have been around for years, but now Israel is granting them validation and legalizing the land theft about which we’ve been screaming and warning for years.”

None of my Palestinian interlocutors were comfortable saying that such a controversial law could serve, in some ways, the Palestinian interest, but they estimate that the bill is being put forth for Knesset approval “at exactly the right time” for them, said the anonymous Fatah official.

In talks with them, I often sensed that along with the real rage they expressed at the bill, they also view the efforts to push it through the legislature as a priceless diplomatic boon.

In his address to the Fatah conference that ended Dec. 2, Abbas declared on Nov. 30 that 2017 would be a decisive year. And so, without having planned the schedule, Israel nonetheless loaded the bullets for what will be the opening salvo of the international campaign that Abbas is planning. “I can’t deny that the [proposed bill] helps us to better explain our position. We couldn’t have asked for anything more,” a PA senior source told Al-Monitor on condition of anonymity. The bill, whether it goes through or is blocked by the Supreme Court, already proves that Israel is not interested in a diplomatic resolution of the conflict, but rather in moves on the ground and legislation enabling it to annex the West Bank. Thus, the Palestinian problem would be exacerbated for generations to come. “This is exactly the point at which we will demand that the world intervene, before it’s too late,” the source said.

Senior PA officials, he added, are planning a massive international campaign that will start with the approval of the outpost legalization bill and continue into next year after the Christian holidays with international persuasion efforts targeted at the establishment of a Palestinian state.

I told the senior Fatah official that he had actually been given a present for the holiday, and he laughed. “We can’t relate to this as a gift,” he said, “but as the moment at which the world will understand what we understood a long time ago — that [Israeli Prime Minister Benjamin] Netanyahu is lying to everyone when he says he favors a two-state solution. You can’t talk about a diplomatic solution and at the same time legalize dozens of settlements that could turn into towns and big communities in the future. That will be our message and we will go with it full steam ahead.”

There was a good reason why Hanan Ashrawi, a member of the PLO’s Central Committee who heads the PA’s department of culture and information, targeted the UN Security Council when lashing out at the Israeli bill. Ashrawi called for an emergency session of the council and demanded sanctions on Israel for promoting the legislation. As previously mentioned in Al-Monitor, Ashrawi is a member of the Palestinian team preparing for Donald Trump’s assumption of the presidency on Jan. 20, 2017, and the campaign against the “parody bill” is part of the PA’s diplomatic preparations.

The PA plan calls for all PLO representatives around the world to inform the foreign ministries of the countries where they are based about the significance of the proposed bill and the theft of private Palestinian lands for the construction and legalization of unauthorized settlements. Abbas and his foreign minister, Riyad Malki, have instructed the PLO reps to advance a UN Security Council move. They explained that the Netanyahu government has no intention of ever resolving the Israeli-Palestinian conflict, and thus the only remaining option for the Palestinians is for the UN Security Council to declare a Palestinian state.

“We know this is a long journey,” said the Palestinian PA source. “But we believe wholeheartedly that such a racist and transparent law will lead the Security Council to convene rapidly. Every time Israel acts in an outrageous manner, we will demand another Security Council session and another session until the entire world understands there’s no other choice. There’s simply no other way. In the end it will happen [the declaration of a Palestinian state].”