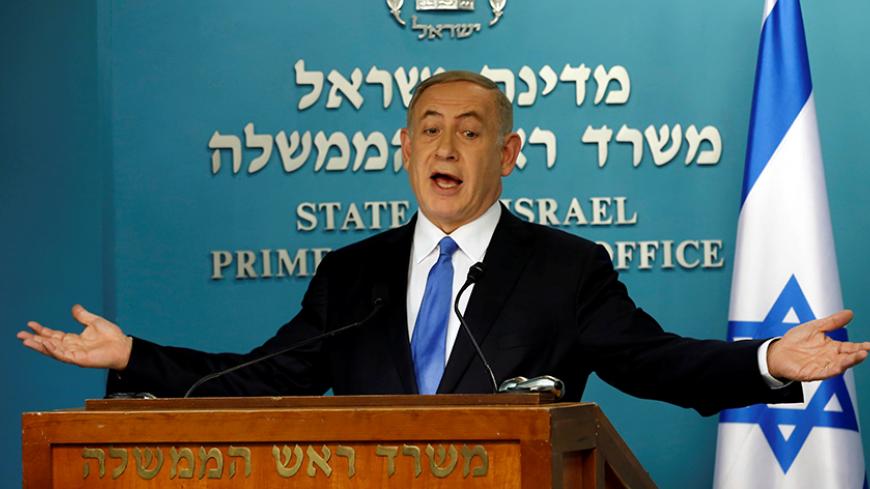 Israel went to war Dec. 23. Yes, war. That was the term Prime Minister Benjamin Netanyahu used to describe the campaign waged against Israeli settlements at the UN Security Council in New York.

Haaretz reported that Netanyahu threatened New Zealand’s foreign minister, Murray McCull, telling him, “If you continue to promote this resolution, from our point of view it will be a declaration of war.” Netanyahu probably wasn't intending to launch long-range missiles at Wellington, so one could assume that the prime minister was referring to a diplomatic war on New Zealand. Thus the day after the passage of UN Security Council Resolution 2334 affirming the illegality of Israeli settlements, Netanyahu set out for diplomatic battle — and not just against New Zealand's far-off islands. Netanyahu embroiled Israel in a diplomatic world war.

Even Netanyahu’s harshest critics agree that he was blessed with keen intelligence. He is undoubtedly aware of the heavy price Israel is paying, and will keep on paying, for his settlement policy. One cannot accuse Netanyahu of inexperience. With Shimon Peres’ recent passing, there isn’t a single Israeli politician who has accrued richer diplomatic experience. This leaves one to seek an explanation in the realm of mental health for the prime minister’s bizarre conduct. A former top official who requested anonymity said that in a conversation about the conflict with the Palestinians, Netanyahu told him that he actually likes conflict. “That’s where I’m in my element,” he was quoted as saying.

In a 2001 article based on long, in-depth observation of the prime minister’s actions and pronouncements, Shaul Kimhi, of the Department of Psychology at the Tel-Hai Academic College, diagnosed Netanyahu as having a narcissistic personality. The renowned political psychologist — Kimhi is a member of several prominent international research organizations — noted that narcissistic leaders are characterized by megalomaniacal behavior, perceive themselves as saviors of their people from tragic mistakes and are lacking in interpersonal skills and credibility. They come across well in the media, are good at manipulating people, lack commitment toward partners and aides, have a limited capacity for empathy (if at all), are constantly busy going after rivals from within and are devoid of democratic values, which they regard as a mere “necessary evil” in order to get elected. In addition, such leaders promote a public image of themselves as “strongmen” who know how to command respect and mercilessly attack their enemies (real and imagined, alike).

Sticking with the war analogy, the prime minister’s behavior since the Security Council's action can be compared to that of the leader of an allegedly democratic, law-abiding state that orders a full-scale military assault on all of its neighbors without any advance discussion with his military command or Cabinet. These days, it is not hard to find politicians, including in the Likud, expressing emotions ranging from amazement to panic over Netanyahu’s behavior. Everyone does so, however, in a whisper, after getting journalists, including yours truly, to swear that they will not mention them by name.

Their behavior is a clear symptom of the diagnosis offered by former Minister Avi Gabai of Kulanu about his former Cabinet colleagues. In a Dec. 26 interview on the investigative TV magazine “Uvda,” Gabai said, “They mostly work at getting re-elected.” Gabai did not exclude his friend, Kulanu Chairman and Finance Minister Moshe Kahlon or his colleagues in the young party, which was formed ahead of the 2015 elections.

Indeed, even politicians who recently served in the top echelons of the defense and diplomatic establishments, such as Construction and Housing Minister and Maj. Gen. (Res.) Yoav Galant, and former Israeli Ambassador to the United States and Deputy Minister Michael Oren, have not felt it incumbent upon themselves to react to Netanyahu’s ravings. The most articulate opponents of international boycotts against settlement products lost their voices when the prime minister instructed them to boycott state leaders, sever ties with UN agencies and lash out at a serving US president. The veteran politician, Shas leader and Interior Minister Aryeh Deri, who 25 years ago fought tooth and nail against fellow government ministers who demanded that Israel bomb Iraq, has also become tongue-tied.

Israeli foreign service officials are walking around these days with their heads hanging. Netanyahu, who holds the foreign affairs portfolio, is not interested in their opinions, having always maintained that the Foreign Ministry is teeming with leftists. A senior Israeli diplomat who asked not to be identified told Al-Monitor that he luckily does not have to explain the prime minister’s lunatic conduct, given that all the politicians, foreign service officers and journalists in the country where he is posted have left for lengthy Christmas vacations. In any event, how can anyone explain the behavior of a leader who warns one day that the proposed “regularization” bill to legalize unauthorized Israeli settlements could result in an investigation of Israeli leaders by the International Criminal Court in The Hague and several days later votes in favor of the legislation? Then after that, Netanyahu attacks states that took heed of his warning and decided at the Security Council that the settlements are, indeed, illegal.

Kimhi warned in his article that in adults with a narcissistic personality, such as Netanyahu, the traits become accentuated over time. This explains the radicalization of the prime minister’s behavior. A minor threat by US President Bill Clinton led to Netanyahu signing the Hebron Protocol (for an Israeli redeployment in Hebron) 20 years ago, in 1997. Eight years ago, all it took was President Barack Obama’s Cairo speech for the prime minister to commit to a two-state solution and a temporary freeze on construction in the settlements. On Jan. 21, 2017, his ideal president will move into the White House. It will be interesting to see how these two conflict aficionados get along.