Iranian politicians used the occasion of Student Day to slam US President-elect Donald Trump and to vow to uproot corruption at home. 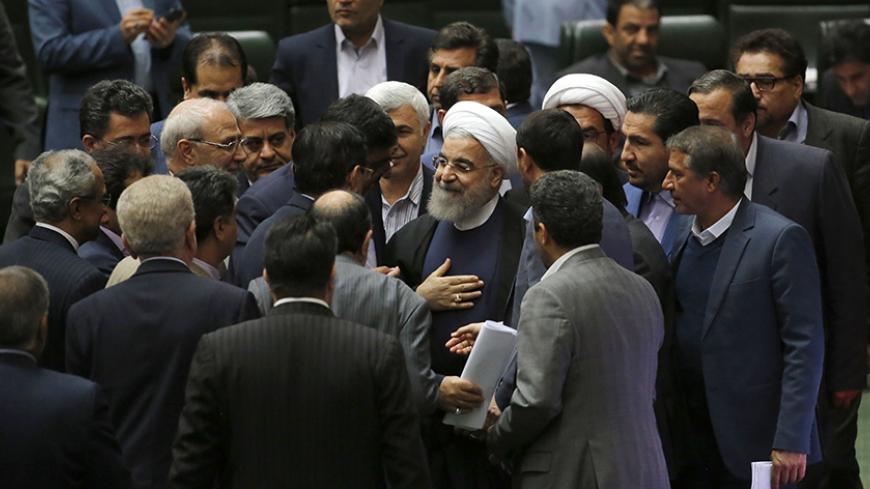 Iranian President Hassan Rouhani (C) speaks with members of parliament after presenting his budget for 2017-2018 to the parliament in Tehran, Iran, Dec. 4, 2016. - ATTA KENARE/AFP/Getty Images

In December 1953, less than four months after the Anglo-American-instigated coup to topple Iranian Prime Minister Mohammad Mossadegh, students at Tehran University went on strike and organized a series of demonstrations. On Dec. 7, 1953, students held a rally to oppose the re-establishment of relations with Britain, as well as the visit of US Vice President Richard Nixon to his close — and recently reinstated — ally, Shah Mohammad Reza Pahlavi. The day ended in bloodshed as the Iranian army entered Tehran University campus and shot dead three students.

Ever since the 1979 Islamic Revolution, Iranian officials have commemorated the bloodshed on the 16th of Azar in the Iranian calendar — which fell on Dec. 6 this year — as Student Day, or Rooz-e-Daneshjoo. This event should not be confused with the other Student Day, Rooz-e-Daneshamooz, which falls on the 13th of Aban, or the anniversary of the November 1979 takeover of the US Embassy in Tehran. (Of note, there are two different words in Persian for school students and university students — daneshamooz and daneshjoo, respectively — which distinguish the two official days on the political calendar.) On Student Day, the Iranian president traditionally delivers a speech at Tehran University, an institution that is known as the most politicized center of higher education in the country and a place that has played a key role in the Iranian student movement over the past six decades.

This year, Iranian politicians used the occasion of Student Day to deliver speeches on topics like the nuclear deal, corruption among officials and the future of the student movement in Iran. President Hassan Rouhani addressed students at Tehran University and spoke about the nuclear deal, which is a key achievement of his administration and an issue that has recently returned to the spotlight after the US Congress' approval of a 10-year extension of the Iran Sanctions Act. The July 2015 Joint Comprehensive Plan of Action (JCPOA), agreed upon by Iran and six world powers, entails the lifting of nuclear-related sanctions in exchange for curbs on the Iranian nuclear program.

In his speech, Rouhani notably stressed that all negotiations on the deal took place under the direct supervision of Supreme Leader Ayatollah Ali Khamenei. He also echoed Khamenei’s previous remarks about Washington being “unreliable” and “untrustworthy.” In this vein, Rouhani said, “Americans and Zionists wanted to convince public opinion that Iran is a threat to world peace,” adding that the goal of his negotiators was to “show the world that they are lying, to show that if there is a threat to the world, it is America and Zionism.” Referring to US President-elect Donald Trump’s campaign pledge to “rip up” the nuclear deal, Rouhani further stated, “[Trump] wants to do many things, but none of his actions will affect us," rhetorically asking, “Do you think that he can rip up the JCPOA? Do you think we and our nation will let him do that?"

Meanwhile, the Reformist Shargh daily published an article on its front page by Hadi Khaniki, a prominent professor of media studies, explaining the importance of Student Day in Iran’s contemporary history. According to Khaniki, Student Day “is the symbol of Iranian students’ identity.”

“Today, universities [as a social entity] have lost their appropriate position in social and political activities. This has occurred due to difficult conditions that universities have gone through in previous years,” Khaniki wrote. He argued that political incidents in 1953 redefined the student movement in Iran and intertwined it with “hope for freedom, justice, democracy and reform.”

On Dec. 6, Etemad daily covered the speeches of political figures from different factions under the prominent front-page headline “University Fever.” The Reformist newspaper reported, “This year, the excitement of Student Day started earlier due to politicians’ attempts to travel across the country a week before the day and to deliver speeches to university students.”

One notable speech was given by Reformist member of parliament Mahmoud Sadeghi, who addressed students at the Amirkabir University of Technology. Sadeghi was recently in the spotlight after having to appear before a court over his call for the judiciary chief to publicize his personal bank accounts, alluding to possible corruption among high-ranking officials. Etemad daily quoted Sadeghi as telling students, “I will keep on fighting corruption till my last drop of blood.”