Across Iran, solemn speeches on the anniversary of the 1979 US Embassy takeover praised Tehran's defiance and expressed reservations about engaging with Washington. 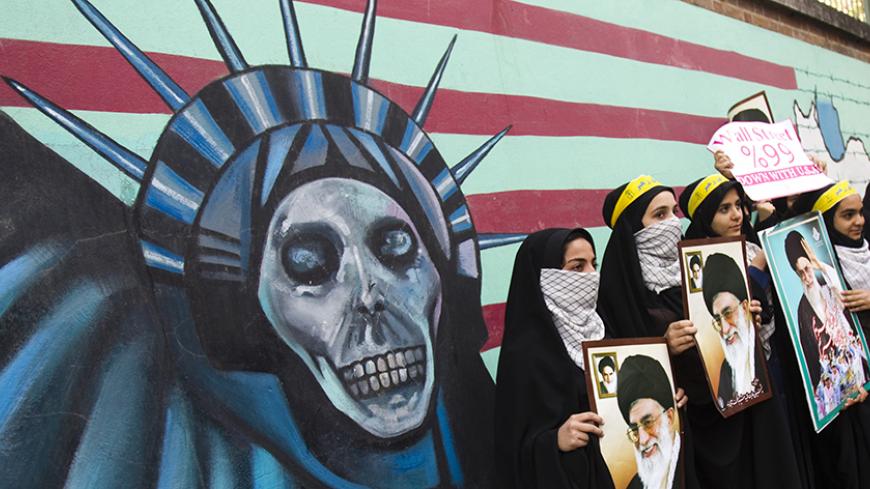 Iranian students holding pictures of Iran's Supreme Leader Ayatollah Ali Khamenei stand in front of an anti-US mural painted on the wall of the former US Embassy in Tehran, Iran, Nov. 4, 2011. - REUTERS/Raheb Homavandi

On the 37th anniversary of the incidents known as the Iran hostage crisis, most Iranian outlets focused on Supreme Leader Ayatollah Ali Khamenei’s speech commemorating the 1979 takeover of the US Embassy in Tehran, signaling his objection to further negotiations with Washington.

On Nov. 4, 1979, a group of Iranian university students seized the embassy of the United States and held 52 Americans hostage for over a year. On April 7, 1980, the United States broke off diplomatic relations with Iran.

On the Iranian official calendar, the 13th day of the month of Aban (which this year falls on Nov. 3) is Student Day. Anti-US rallies have been organized across the country on this day since 1979.

The conservative Javan Daily, on the occasion of Student Day, quoted Khamenei as saying, “Compromise with the US is the will of the weary and regretful.” Its front page also quoted Khamenei as addressing the US presidential election with comments such as “The two candidates’ speeches are enough to dishonor themselves.”

The conservative Kayhan daily also ran quotations from Khamenei on its front page, focusing more on his viewpoints on the Joint Comprehensive Plan of Action (JCPOA). Kayhan cited Khamenei as saying, “Compromise with the US will worsen [Iran’s] issues; the last example of that is the JCPOA.”

In an editorial, Kayhan also condemned the nuclear deal. The daily newspaper referred to the 1979 incidents and argued, “The government is better off thinking about retaliation to counter the Americans’ avarice. … If we stand firm, they will retreat and will have no choice but to surrender.”

Resalat also focused on the Nov. 3 demonstrations in Iran marking the anniversary of the embassy takeover. Resalat’s headline read, “US' death knell to sound today,” referring to the anti-American rallies across the country.

On Nov. 3, Brig. Gen. Hossein Salami, the deputy head of the Islamic Revolutionary Guard Corps, joined demonstrators in central Tehran and addressed the crowd outside the complex that used to serve as the US Embassy.

“Today, the security of Iran is intertwined with the security of other Islamic countries,” he said, according to the Tasnim news agency. “If we don’t provide assistance for the victory of Muslims in Syria, Lebanon, Iraq and Yemen, then the enemy will keep us divided and will create a catastrophe [for us],” he added.

Meanwhile, the Reformist Shargh Daily’s front page featured an interview with Abbas Abdi, one of the students who stormed the US Embassy back in 1979. Abdi, who later joined the Reformist movement, said, “We were in a [political] environment in which we had to occupy the embassy.”

He added, “People are not crazy [enough] to start a revolution without any reason. They revolt in response to a condition.”