In his latest speech, Turkish President Recep Tayyip Erdogan invoked a traumatic memory for Turks, the Treaty of Sevres, in a move calculated to appeal to his nationalist supporters. 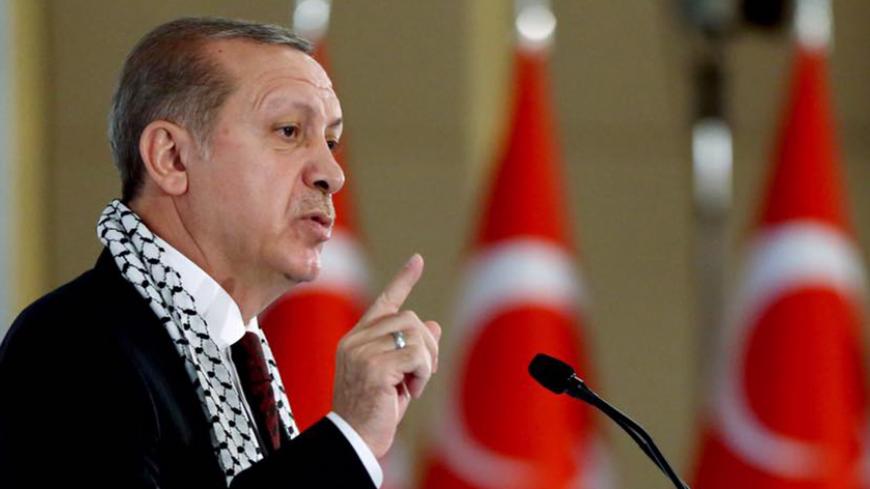 Turkish President Recep Tayyip Erdogan has raised the stakes for Turkey’s military incursion in Syria, better known as Operation Euphrates Shield. “At this critical time when there are attempts to restructure the world and our region, if we stop, we will find ourselves facing Sevres conditions,” he said in a speech Dec. 22. For the Turkish president, a proactive approach to regional and global affairs (especially in Syria) is the only thing that could forestall doom.

Erdogan’s comments play on a traumatic memory for Turks, the Treaty of Sevres. Signed after World War I between the defeated Ottoman Empire and victorious allies Britain, France and their partners as a “peace treaty,” Sevres aimed to dismember the remainder of Ottoman lands (most of them with a majority-Turkish population) and establish Western spheres of influence. Turkey managed to secure its present-day borders with the Treaty of Lausanne in 1923 after a two-year war under the leadership of Mustafa Kemal Ataturk.

Although Erdogan has often gotten into trouble for suggesting that Turkey might extend its borders beyond those provisioned in the Lausanne Treaty (possibly at the expense of Syria and Iraq), the Turkish president repeated similar points in his Dec. 22 speech. He said, “We are a nation that still lives with the sorrows of what we lost at Lausanne. To speak frankly, Turkey is going through its greatest struggle since the War of Independence. This is a struggle [to preserve] a single nation, a single homeland, a single state.”

Erdogan gave his speech as reports came in that 16 Turkish soldiers had been killed in al-Bab during the Turkish military’s joint operation with its Free Syrian Army (FSA) allies to capture the Islamic State-held town. More than 80 Turkish soldiers are reportedly wounded, nine of them critically.

Al-Bab is critical for Ankara’s objectives. The town is at the crossroads between the Kurdish cantons of Afrin in the northwest and Jazeera and Kobani to the northeast, and Turkey does not want to see them link up. To the southwest of al-Bab lies Aleppo, which is likely to come under the Syrian regime’s full control in the near future. It is becoming increasingly clear that the Turkish military and the FSA are bent on putting this strategic prize under their control and gaining the upper hand against the Syrian regime and Syrian Kurdish groups.

That, however, may be easier said than done. According to Umit Ozdag, an opposition politician formerly with the Nationalist Action Party, Turkish military units in Syria are facing serious logistical problems. Ozdag, the son of a retired military officer with well-established networks in Turkey’s armed forces, said at a parliamentary press conference that acquaintances told him that some soldiers in Syria do not yet have winter tents or portable heaters. Likewise, Ozdag said food supplies and clean water are not easy to come by, and some troops who have been in Syria have not taken a proper shower since Operation Euphrates Shield commenced in August.

If Erdogan, who likes to underline his role as commander-in-chief of Turkey’s armed forces on every occasion, is going to ask his people and his army for sacrifices, he could serve his country’s interests best by seeing that his troops are well-provisioned — especially those fighting at the front lines.