The amendment to the 2013 Protest Law, which deems several articles contrary to the Egyptian Constitution, will not mean a significant change to those in prison or those wanting to protest. 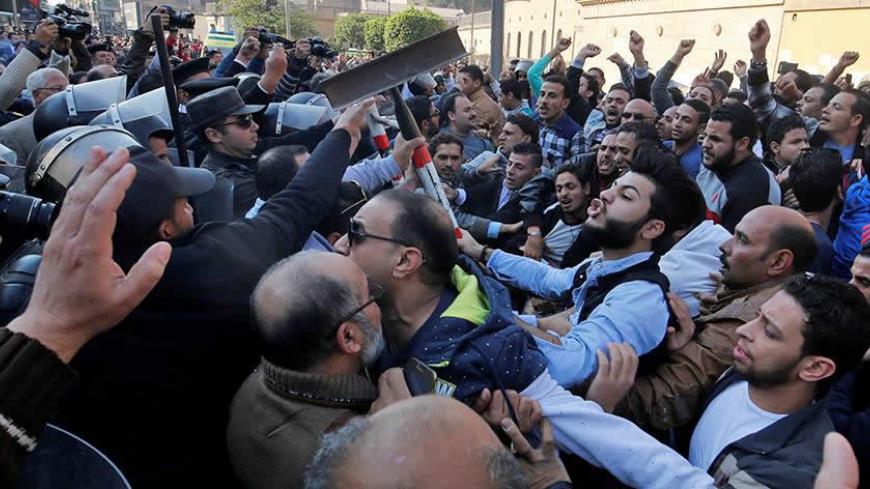 Christians clash with riot police in front of St. Mark's Coptic Orthodox Cathedral in the Abbasiya district after an explosion inside the cathedral, Cairo, Dec. 11, 2016. - REUTERS/Amr Abdallah Dalsh

A crowd of hundreds gathered in front of St. Mark's Coptic Orthodox Cathedral in the Abbasiya district in Cairo on Dec. 11, chanting “Ya Rab,” a plea to God for help. Earlier in the day, the church had been bombed, killing 26 and injuring more than 40 people. The demonstration was met by the security forces’ attempt to disperse it. Chants of "the police are thugs” changed to the revolutionary “the people want the downfall of the regime.”

Protests have become a rare sight in stick-governed Egypt, a sharp contradiction to the two years that followed the revolution of Jan. 25, 2011. Since its passing in November 2013, the controversial Protest Law granted police the right to ban or postpone a protest if it is deemed a “threat to security and peace,” as well as provisions punishing violators with prison terms of at least one year and a minimum fine of 50,000 Egyptian pounds ($2,750).

However, in a surprise move one week before the explosion, the Supreme Constitutional Court issued a verdict against Article 10 of the Protest Law, which gives authority to the minister of interior to ban protests or change their course. Yet the court upheld Article 8 — which dictates prior notification for protests — rejecting a lawsuit against the entire Protest Law.

“The verdict has no consequences for the thousands imprisoned,” rights lawyer Mokhtar Mounir told Al-Monitor. Children and the elderly are behind bars under the provision of this law, along with activists such as well-known Alaa Abdel Fattah, and April 6 youth movement leaders Ahmed Maher and Mohammed Adel.

The court order resolved the conflict that was ongoing between a protest requiring a mere notification and requiring an approval for it, according to Mounir. The latter was ruled unconstitutional. He stated that the decision was political, and foresees that it will open up the public sphere.

Journalist Sara Abu Bakr told Al-Monitor that the timing was interesting, right before the January 25 Revolution. “The clause removal supports the people's right to protest, which may embolden some to take to the streets again," she said.

If someone violates the law for the first time — for instance, by demonstrating without getting permission — they will only be fined, according to the parliamentarians' proposed change. Currently, the judge can decide the sentence — either a steep fine or imprisonment, or both. If the same person violates the law again within a year, they are to be imprisoned.

“This is to give a chance to the youth to go on with their lives as normal, as well as to provide a public and private deterrence,” Khouly told Al-Monitor.

Khouly handed the bill to parliament on Nov. 23.

According to Khouly, the president seems to be serious about it, evidenced by the fact that the amendment was one of Sisi’s eight recommendations at the end of the conference. Yet, he claimed that amending the Protest Law will not help those already imprisoned.

A huge chunk of public opinion deems both political and economic conditions under the current regime drastically worse than those that the Egyptians revolted against.

Abu Bakr noted that many people are tired, and many young people have given up on the country and have left. “What is coming will be led not by the will to change, by the youth, by hope. No, it will be led by despair, poverty and the basic need to survive. It could become very ugly if things continue as they are now,” he said.

But the revolution’s sixth anniversary will witness only minor protests, Abu Bakr added, because of the security measures that will be taken that day.

Economic expert Ibrahim El-Ghitany agrees that mass protesting will not take place. He told Al-Monitor, “There will be a combination of celebrations and expressing dissent.”

According to Ghitany, Egypt is undergoing an economic crisis that is crushing even the upper middle class. The market is fluctuating, there is a huge budget deficit and advancement is slow. The government has undergone procedures that are “painful” to the people; the Egyptian pound has been floated and consumer prices have become closer to those of the international market, with up to 20% inflation.

“The social justice system has been greatly dismantled,” Ghitany said. In 2011, the third demand of the people was social justice, after bread and liberty. The future brings measures that will further pressure citizens, he noted. The government is to float oil and electricity prices.

Previously, state loyalists would denounce the right to protest for its “hindering economic advancement.” To that, Ahmed Said, a physician and former prisoner charged with violating the Protest Law, told Al-Monitor, “Tell me how many demonstrations took place [during] the last couple of years and then tell me how the country is doing.”

Ghitany said that there is congestion, and manifestations of dissent are present but oppressed. Nevertheless, protests will be limited, he expects.

The nature of Egypt’s current political regime does not incorporate, or believe in the importance of, a dialogue with civil society or any other party, making its decisions in a top-down manner, he added. At the same time, the government forbids protests, using oppression, arrests and attributing any protest to the “Muslim Brotherhood terrorist organization.”

If people demonstrated against economic conditions, would the government take their opinion into consideration or would it continue with its plans? In January 1977, thousands went out to protest a price hike. Despite dubbing it "the thieves’ uprising," former President Anwar Sadat changed his economic reform plans, and the prices of bread, consumer products and materials were reduced. In 2014, the Egyptian government embarked on an economic reform program that included the gradual phasing out of energy subsidies and the introduction of new taxes.

Yet this time, Ghitany believes it would be difficult for the government to back away. “The cost of withdrawing will be higher than continuing with the plans,” he said. He added that it would lead to a larger economic recession and budget deficit.

What is negotiable upon demonstrating objection is the timing of decisions. The government could bear the cost of postponing the increase in electricity prices, for instance. The oil price hike, rumored to take place in January, could be pushed to the middle or end of 2017. But such decisions will never be canceled, he asserted.

“There will be a tipping point,” Abu Bakr said. “Jan. 25 remains a symbol of hope for many and a representation of fear for the regime.”