An Al Jazeera documentary about Egypt’s military conscription was broadcast to a wave of protests from officials in Cairo. 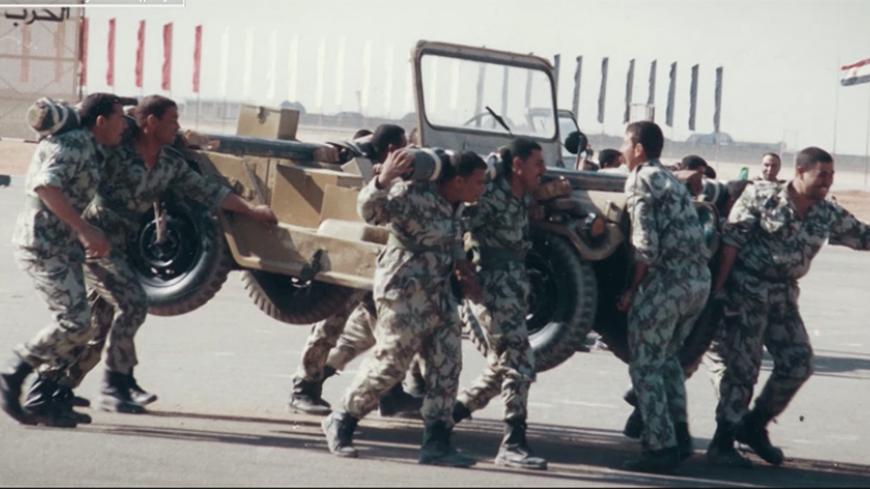 Egyptian soldiers carry a jeep during a demonstration in this still from Al Jazeera's documentary about conscription and the Egyptian army, Nov. 27, 2016. - YouTube/Al Jazeera Arabic

According to Article 3 of Law No. 127 (1980), military service in Egypt is mandatory for men ages 18 to 30. Conscripts spend a period of military service either in the Egyptian armed forces or in the police sector, and men of service age can't get a job or travel until after they have completed their military service.

On Nov. 20, Al Jazeera broadcast the teaser of a documentary on the issue. The clip sparked a wave of criticism and anger among media figures and journalists in Egypt. Outrage over the film's subject matter was exacerbated by its producer, a longtime critic of Egyptian policies.

The film shares soldiers' stories, including the difficulties they experienced during their service. It reveals that some never underwent military training and did personal work for military commanders.

There are some organizations that reject conscription in Egypt, such as the "No to Compulsory Military Service Movement” founded in April 2009. This group's website states that it aims to resist the military establishment's efforts to militarize Egyptian society through targeted media campaigns and education.

In response to the teaser, the Egyptian armed forces’ Department of Morale Affairs released its own film Nov. 24 titled “A day in the shoes of a fighter,” describing life inside the military camps and showing the treatment that soldiers receive during their service.

On the diplomatic level, Egyptian Foreign Ministry spokesman Ahmed Abu Zeid said Nov. 27 on ONLive TV that the Egyptian government would not respond to the film and would leave it to the press to address.

On Nov. 27, Al Jazeera broadcast the film, which “covered a dark area and included testimony and analysis in a special investigation,” according to the channel's official YouTube account.

The film raised the ire of Egyptian officials. Parliament member Saad al-Jamal, the chairman of the parliament’s Arab Affairs Committee, said Nov. 26 in a statement to Youm7 that the film negatively portrays the Egyptian army in order to undermine the Egyptian state. He pointed out that the Egyptian armed forces are important not only to Egypt but the entire Arab world.

The film was well-received among Egyptians, and even citizens of other Arab countries watched the film, as its name, “Asaker” ("Soldier"), was heavily used on Twitter in the United Arab Emirates and Saudi Arabia. As of the date of the writing of the article, the film had been watched more than 1.2 million times on YouTube.

Some activists criticized the film's content on Twitter. Khalaf, a citizen from Saudi Arabia, said, “When they were sure of the [Muslim] Brotherhood's failure to drag the army into civil war, they started trying to destroy the army from the inside. How does Qatar benefit from this?”

Merhi bin Faihan, a Saudi citizen, tweeted, “God help Egypt, the fox is guarding the hen house,” in reference to the military commanders’ exploitation of soldiers to perform nonmilitary work.

History professor Khaled Fahmy, the head of the Department of History at the American University of Cairo, posted on Facebook Nov. 27 that the film failed to deeply analyze the history of ​​conscription and the peculiarity of the Egyptian experience, and it did not compare conscription in Egypt with other countries.

Fahmy said that the “shallow” film was pointless and should have included interviews with army officers or commanders. He said that it is a mere collection of official videos and TV reports, and added that while it was accompanied by “much fanfare, its content is poor.”

According to Fahmy, the film failed to answer questions about conscription in Egypt, such as: What is the alternative to conscription? How much does conscription cost the state? How important is conscription to maintaining the army’s fighting capabilities?

Huwaida Mustafa, the dean of the faculty of information at El Shorouk Academy in al-Shorouk city, agreed with Fahmy. She told Al-Monitor over the phone that Al Jazeera’s film is not a documentary, as it was not based on true events and developments. Most parts of the film used actors. In other words, the film was intended to convey the point of view of its producers.

Mustafa insisted that the film was created to send a specific message and did not include any official views, making it a drama and not a documentary, which would identify its sources.

Director Imad Eddin al-Sayed said in a statement to Qatari Al-Arab Dec. 1 that he had to rely on actors and used archival footage because of the poor available footage about the topics discussed in the film and the difficulty of filming inside the army camps. He explained that some parts of the film contained very shocking leaked clips while other parts only featured testimony made by conscripts.

Asked why the film did not include official points of view, Sayed said, “We tried to involve Egyptian military experts, but they all refused to talk about this subject for political and security considerations. This is why we turned to a retired military expert who took part in supervising the Egyptian army training in the 1980s.”

When asked about the film, Saudi military analyst and writer at Al Riyadh newspaper Ibrahim el-Merhi stressed that no matter how much one disagrees with the Egyptian regime, the Egyptian army should never be targeted.

Merhi told Al-Monitor, “The goal of the film is to spark a revolution and a coup in the Egyptian army against its commanders at a time when Egypt and its people need security and stability.”

A man who asked to be identified as A. M., who was finishing his service when the film aired, told Al-Monitor that he is not against the principle of conscription, but some parts of the film reflect realities that cannot be denied.

He explained, however, “The doctrine of the armed forces is stronger than all this nonsense, and even if we are 90 million different inhabitants, we should all be united behind our military.”