Who's at fault for Egypt's economic crisis?

The Egyptian economy seems on the verge of a profound crisis unless decision-makers in Cairo succeed in reaching exceptional agreements with petroleum exporters. 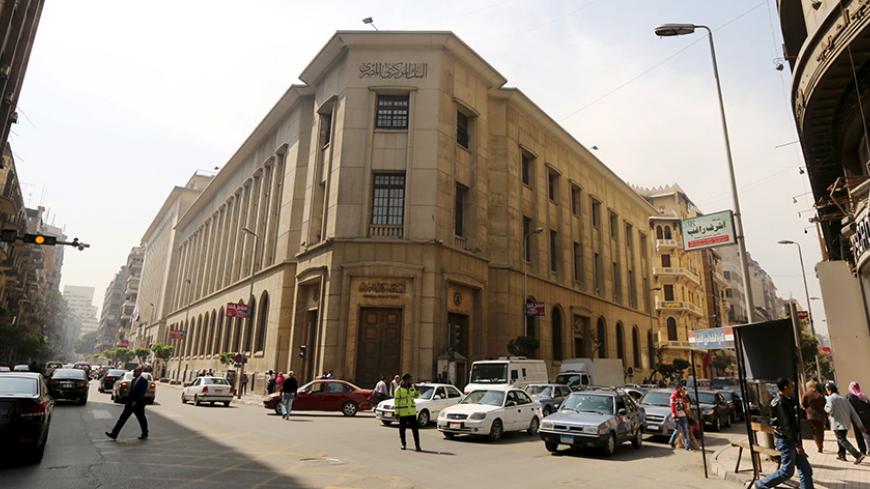 The simplest solution to prevent declines in the price of any commodity is to have the producers of said commodity agree to cut production. Such a move would lead, by extension, to reduced market saturation and a rise in demand for, and price of, the commodity in question.

Yet, despite the simplicity of this solution and its prevalence in all types of markets, resorting to it may lead to repercussions that are greatly more complex and dangerous when the targeted commodity is strategic in nature — as is the case with petroleum.

In that regard, Egypt may be viewed as an important example of the dangers engendered by such a strategy, whereby tension and concern currently reign supreme throughout the Egyptian economy. This is in light of the continuous increase in the price of petroleum, which has risen to record highs in the period extending from July 2015 to Dec. 13, 2016, topping $57.89 per barrel of Brent crude, amid expectations that it will continue to rise to $60 per barrel.

The second phase of the plan came after the Dec. 10 meeting also held in Vienna, when OPEC members agreed with 11 nonmember states to further reduce output by 558,000 barrels per day. In affirmation thereof — on the sidelines of the meeting — the organization’s president, Qatar’s Energy Minister Mohammed Bin Saleh al-Sada, described the agreement as a “historic” one entered into with Russia, Mexico, Kazakhstan, Malaysia, Oman, Azerbaijan, Bahrain, Equatorial Guinea, Sudan, South Sudan and Brunei.

Currently, Egypt’s economy is suffering from a shortage of foreign currency reserves and liquidity, leading the country’s central bank to float on Nov. 3 the Egyptian pound’s value, which has subsequently risen from 8.88 to 18 pounds per US dollar (a 100% increase). On that same day, the Ministry of Petroleum imposed a 30% to 40% increase on the price of petroleum products, including all gasoline types, natural gas, diesel and fuel oil.

But it would seem that increasing the price of petroleum products is not an adequate enough measure to overcome the current crisis. In this context, Petroleum Minister Tarek el-Molla stated in a Nov. 6 press conference that government subsidies for petroleum products totaled 35 billion Egyptian pounds ($1.7 billion) for fiscal year 2016-2017 with an exchange rate of 9 pounds per dollar and $40 per barrel of Brent crude.

Molla further indicated that the extent of the crisis was evident by the fact that floating the exchange rate and the global rise in petroleum prices — which was minor then — would result in subsidies increasing to 64 billion Egyptian pounds ($3.2 billion), despite the price increase imposed on petroleum products.

In that context, Medhat Nafea, the general director of risks at the Cairo Stock Exchange, told Al-Monitor about the repercussions of the global rise in petroleum prices on Egypt’s economy. He said, “This will surely lead to a crisis, and I fear that the government will be forced to again cut subsidies on petroleum products during the current or next fiscal year [2017-2018]. This is because reducing the deficit is a key component of the economic reform plan and stipulated under the terms of the International Monetary Fund’s loan to Egypt. Reducing subsidies is a principal method by which to reduce budget deficits.”

On the other hand, Cairo University professor of economics Faraj Abdel Fattah told Al-Monitor, “I prefer to consider the global rise in petroleum prices as a challenge that must be faced, and not yet a crisis. The issue revolves around the Egyptian government’s ability to negotiate better contractual provisions and long-term petroleum agreements before current prices rise any further. [The issue is also about] Egypt’s ability to enter into contracts and agreements predicated on payment facilities and grace periods, similar to the Aramco agreement, thus allowing the state to recover economically while giving the economic reform plan time to succeed.”

Abdel Fattah added, "The raise in global petroleum prices will have positive effects on foreign currency flow to Egypt through its petroleum exports, whose prices will raise consequently with global prices."

Since early October, Saudi Aramco has halted petroleum exports to Egypt. This halt came despite the two parties signing an agreement in April, under which Egypt would import its petroleum needs from Saudi Arabia, particularly from Aramco. But the latter ultimately halted its exports to Egypt when Egyptian representative Amr Abul Ata at the UN Security Council voted Oct. 9 in favor of the Saudi-opposed Russian draft resolution to end the war in Aleppo.

Aramco halting petroleum exports to Egypt caused grave economic pressures. According to media estimates, under its April agreement with Aramco, Cairo was supposed to make payments on a $23 billion deal over a 15-year period in return for Aramco providing the country with 400,000 tons of diesel, 200,000 tons of gasoline and 100,000 tons of fuel oil (approximately 80% of Egypt’s imported petroleum product requirements) per month over a five-year period, at a fixed interest rate of 2% and a payment grace period of three years. In other words, Egypt’s obligations over an 18-year period, including the three-year grace period, amounted to $30.8 billion.

The three-year grace period may have averted Egypt the burden of securing the $3.84 billion in foreign currencies needed per year to import approximately 80% of its petroleum requirements in light of the state’s foreign currency crisis and declining cash reserves. Prior to signing the Aramco deal, Molla had stated back in January that Egypt would import petroleum products to the tune of $400 million per month. But, as a result of Aramco’s decision to halt exports, the country’s economy must now shoulder the burden of securing, at the very least, an amount equal to said import allocation.

It seems likely that the central bank’s decision to float the Egyptian pound’s foreign exchange rate was influenced by Aramco’s decision to halt petroleum exports. The pressures associated with securing the foreign currencies needed to import such products from other sources may have prevented the central bank’s ability to sell out its weekly $120 million bond issue ($5.76 billion per year) at an exchange rate of 8.8 pounds to the dollar prior to floating said exchange rate. It should be noted that said bond tenders were completely halted after the decision to float the currency.

The Egyptian economy seems on the verge of a profound crisis unless decision-makers in Cairo succeed in reaching exceptional agreements with petroleum exporters — particularly in the Arabian Gulf — prior to the new year and before OPEC resolutions enter into force.