The fall of Aleppo to Syrian government forces has Ankara recalibrating its options in Syria. 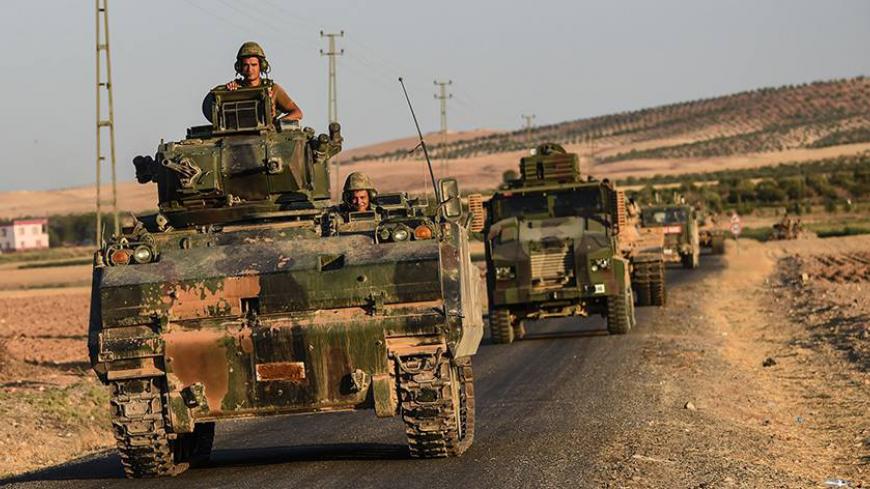 Turkey’s outsize ambitions in Syria lie in shreds as forces loyal to President Bashar al-Assad press on to assert control over the rebel strongholds that remain in Aleppo. Ankara's long-running support for the rebels in the war-ravaged city has seemingly been reduced to appeals from Turkish rebel sympathizers on Twitter, with #HaleplcinAyaktayiz, “We Are Mobilized for Aleppo,” trending on the social media site.

The drama in Aleppo, a city seen as key to a rebel victory against Assad, unfolded as Turkey’s prime minister, Binali Yildirim, held talks Dec. 6 in Russia with his counterpart, Dmitry Medvedev, to restore trade and other links that crumbled when Turkey downed a Russian jet over the Syrian border in November 2015.

A critical piece of the Turkey-Russia reset is what to do about Ankara's rebel proxies. The latest developments in Aleppo suggest that some kind of understanding has been reached, with Turkey reportedly mediating on behalf of the rebels and their families for their withdrawal to Idlib.

Ankara is in a hurry because of its paranoia over the Syrian Kurdish statelet it sees emerging along its border. It is desperate to stop the Syrian Kurdish People’s Protection Units (YPG) from physically linking all the cantons under its control. This, in turn, means preventing the YPG from taking the town of al-Bab from the Islamic State and also striking a deal with Russia, and by extension with the Assad regime, presumably at the Syrian Kurds’ expense.

Murat Yetkin, a prominent columnist, summed up Ankara’s position as follows: “Turkey is trying to find a way to achieve its targets, which have narrowed from overthrowing Bashar al-Assad to stopping the PYD [Democratic Union Party, the YPG's political arm], to having full control over its 910-kilometer [565-mile] border with Syria.” He concluded, “With more uncertainties in the future with the advent of the Donald Trump administration in the US, it won’t matter for Ankara whether it achieves that goal with the US or Russia.”

Until recently, most pundits had reckoned that Turkey would not make any dramatic changes to its Syria policy until a new administration takes office in Washington. This, however, was premised on the Democratic presidential candidate, Hillary Clinton, who echoed Turkey’s calls for a no-fly zone in Syria, winning the election. President-elect Trump, on the other hand, has voiced deep skepticism about the rebels, prompting Turkey to consider cutting its losses.

Still, Turkey can rightfully claim that it has done more than any other state for Syrian refugees. An estimated 2.75 million Syrians are currently living in Turkey, mostly around the Syrian border and in Istanbul, Ankara and Izmir, the country’s largest cities. Yildirim recently announced that more than $20 billion had been spent so far on their care. His deputy, Veysi Kaynak, told the state-run Anadolu Agency Dec. 7 that 78,824 Syrian children were being educated at refugee centers, while another 133,400 were enrolled in state-run schools across the country.

Indeed, the number of Syrian children receiving an education is gradually increasing, the International Crisis Group (ICG) observed in a comprehensive report on Syrian refugees in Turkey. There was a 50% increase in enrollment between June 2015 and March 2016. Yet, some 400,000 of the approximately 900,000 refugees of school age still do not attend an educational facility.

While the integration of refugees remains only skin-deep, there is growing recognition that most of the Syrians are in Turkey to stay. The ICG noted, “Acknowledgement of the need to integrate Syrians into the workforce began in January 2016, when Syrians under temporary protection were granted the right to receive work permits. But with 3.5 million Turkish citizens unemployed, resentment is high about Syrians competing for jobs.” In addition, host communities “widely see Syrians as a security risk,” not least because of their perceived links to jihadist groups.

All of this means that Turkey is unwilling to take additional Syrian refugees, especially in the wake of the July 15 coup attempt and the economic and political chaos that has ensued. Thus, while many Turks continue to pay lip service to Syria’s beleaguered revolutionaries, they may well not object to Ankara’s efforts to keep at bay the fresh wave of refugees that would likely be prompted by their defeat.