Many members of Turkey's Justice and Development Party are buying and carrying weapons without knowing how to use them. 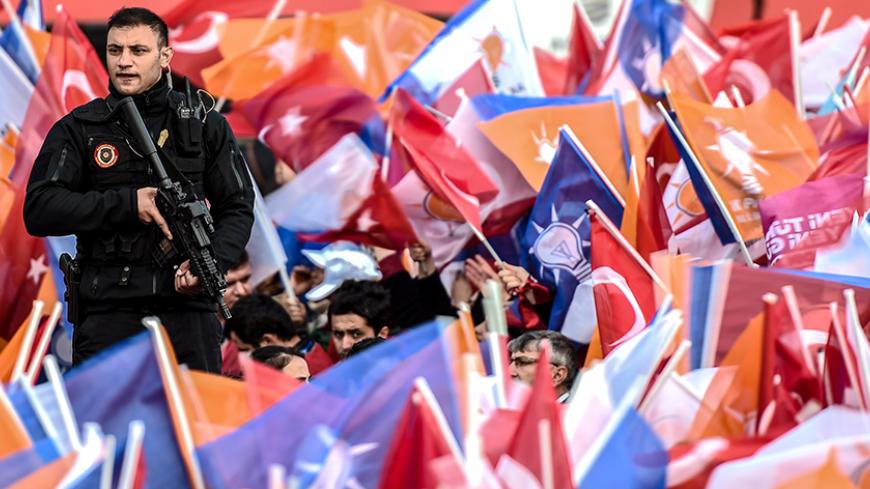 A correspondent in Turkey
November 1, 2016

Last year, a close friend advised me to stop trying to make a meager living by writing articles. Instead, this friend said, I should take up firearms training for all the senior Turkish bureaucrats who have been rushing to buy guns. The problem, he said, was that these new gun owners had no idea how to use their weapons. My friend said that's why he began offering private training on how to care for, load, conceal and carry guns. The last phase of training is target practice at a range.

The same friend called me again recently, saying, “The demand is through the roof. They are now issuing carry permits to all AKP [Justice and Development Party] members, and journalists and celebrities. We are short on instructors. We pay $200 an hour — join us.”

His words came back to mind — front and center — on Oct. 23, when Interior Minister Suleyman Soylu announced that AKP members from Turkey's restless east and southeast regions will be given gun permits. "They will be given police protection as well," he said. "We will make sure they are defended by long-range weapons.” After his statement, a social media frenzy broke out, with several hashtags calling on AKP members to arm themselves, and opponents questioning if this was the prelude to a civil war in Turkey.

The personal armament trend is not new. In the first six months of 2016, Turkey jumped from No. 25 to No. 8 among the top countries buying weapons from Germany, according to a report prepared for the German Council of Ministers.

This data is just the tip of the iceberg. Gun aficionados are easy to spot because only a few of those who carry weapons know how to conceal them properly. Especially in Ankara and Istanbul, in restaurants and cafes frequented by senior bureaucrats and AKP elites, one will see many of them pulling up their belts with one or even two guns holding them down. Indeed, the scene could get quite worrisome, as sometimes the newfound hobby of carrying a gun becomes overwhelming for the owner. For example, an amateur concealed-gun carrier might be seen dropping a magazine, touching their weapons frequently and forgetting to adjust them properly before exiting a car, restroom or simply getting up from a chair.

Waiters in the most popular tavern in Ankara spoke with Al-Monitor about the proliferation of gun-toting politicians. One waiter said, “AKP bureaucrats hang out here almost every night. They do not drink, but this is a place for them to see pretty women and to be seen. We observe that more of them are armed now." This is especially true, they said, if a bureaucrat is having a personal or discreet meeting and has released his bodyguard for the night. "They will be armed and wearing a bulletproof vest.”

These gun owners pose an imminent threat to themselves and those around them, and their numbers are increasing.

Another example that speaks volumes can be found in the pro-AKP Islamist newspaper, Yeni Akit daily. Since 2010, the paper has run front-page ads for pump-action shotguns. In the aftermath of the July 15 coup attempt, the ads have advanced to automatic and semi-automatic guns and shotguns, under the slogan “Permits on us.”

In Turkey, if you have money it is easy to buy a gun, get a permit and even trade guns online. Yet, prices are quite high compared with those in the United States. Imported guns that are registered are especially expensive, and if you are in the southeast — where guns are in high demand — the prices soar. However, you can get your hands on a 3- or 4-year-old black-market Glock or Smith & Wesson M&P (military and police) pistol for $500-$600. Brand-new models go for $2,000-$4,000. If Turkish-made handguns are acceptable, they can be had for $100-$400. In a country where every social media post and action is monitored, isn't it odd that the websites for trading guns or purchasing bullets operate freely? Plus, if the highest-paid bureaucrat’s salary is around $4,000 per month, who can afford these guns?

For decades, Turkish Islamists prided themselves on not carrying arms. But that has changed, especially since the coup attempt. Prominent Islamist columnists such as Abdurrahman Dilipak have openly advocated that those who have weapons with permits should carry them. “If someone is shooting at me, would I reply by screaming slogans?” Dilipak has said. This sentence has resonated among Islamists and ultranationalists strongly since July.

Several factors have contributed to the fast-paced arming of the AKP. Al-Monitor had a recent chat with three senior AKP officials. At the time, they were carrying weapons and each official had at least two magazines — all of it US-made and the latest models. These men offered three reasons for arming: fear of attacks by the Kurdistan Workers Party (PKK), which Turkey considers a terrorist group; the clandestine activities of the Gulen movement; and the limited number of bodyguards government can provide. “Only the head of every department gets protection. For the rest of us, it's each man for himself,” one of the AKP officials said.

In recent months, the PKK and its offshoots have carried out several targeted assassination attempts on AKP members in the Kurdish-majority southeast region. Several AKP members have been killed.

Since the July 15 coup attempt, Turkish Islamists have become more scared of such assassinations. Many believe Gulenists would employ anyone to kill them. Hence, less than 48 hours after the coup attempt, the senior adviser to President Recep Tayyip Erdogan, Seref Malkoc, appeared on live television announcing that the Interior Ministry would allow permits for citizens to own guns. He said, “There are obstacles for citizens to own guns [right now]. If you look at all these shootings, they are carried out by guns without legal permits.” Malkoc was clear that mafia members, gangs and murderers would somehow get their hands on smuggled weapons, so for the sake of citizens' honorable right to defend the nation, permits should be issued without any hassle.

So on Oct. 23, Soylu announced what is being dubbed "Texan law" — that AKP members will be provided with permits to buy and carry guns. The new statutory law has not been issued yet. Soylu has explicitly stated the law is for AKP members who feel their lives are in danger in Kurdish-majority towns, but AKP officials and sympathizers are confident that the declared state of emergency will facilitate pro-AKP factions, nationalists and Islamists to also get gun permits.

One might wonder, is it really that difficult to get a permit? Not at all. Indeed, in Erdogan’s hometown, Rize, the government is providing gun permits to anyone who donates to a foundation designed to provide services to villages. Now, the demand is overwhelming. The governor also told Rize residents, “If there is another coup attempt like July 15, I will hand out guns to you myself.”

So, it is easy to get a permit to carry a gun, and one does not have to worry in Turkey about concealing weapons. As a journalist told Al-Monitor in an upscale Istanbul cafe, men never have to hide their weapons. "Now, as pious women, we have access to self-defense for the first time,” she said while resting her engraved Sig Sauer P226 pistol on the table in broad daylight. Turkey is becoming quite a scary place even for those who are trained to handle guns for a living.