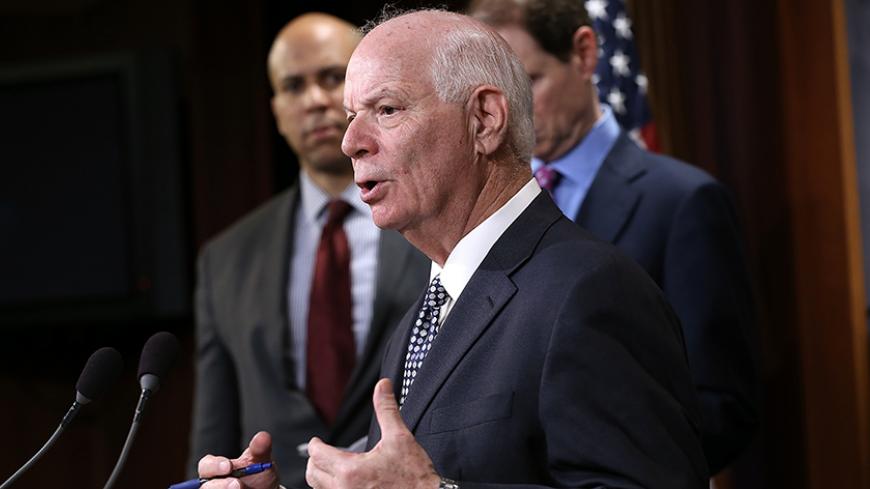 In a wide-ranging interview with Capitol Hill reporters, Sen. Ben Cardin, D-Md., laid out a foreign policy platform for the incoming Congress that seeks to keep the United States engaged in the world while confronting US foes and undemocratic actors. Cardin predicted an activist Congress as Democrats and Republicans band together to confront Trump on some of his campaign rhetoric that's been out of step with traditional US policy around the world.

"I think my Republican colleagues agree with me — not with President-elect Trump," Cardin said. "In my conversations with several Republicans, after the election, they have acknowledged that we fall down on our responsibility when we don't act."

Cardin's comments are particularly noteworthy coming from a centrist Democrat who has worked closely with Republicans on national security issues. In addition, Democrats will hold at least 48 seats in the next Senate (49 if they improbably win a runoff in Louisiana), more than enough to force Republicans to compromise.

One of the first orders of business will be to punish Russia for its alleged interference in the US elections. Cardin said he was working on legislation to sanction Russia for cyberattacks and its "interference" in Syria and Ukraine. He promised to reveal more details during his keynote address Nov. 17 for the Center for Strategic & International Studies' Transatlantic Forum on Russia.

"Whether you attack us with a MiG or a mouse, it's an attack," Cardin said. "And it requires a response."

Cardin suggested that the Senate is unlikely to act before next year, however. On Nov. 15, the House passed legislation that would force Trump to sanction Moscow for its role in Syria, but Cardin said the Senate doesn't share the same sense of urgency.

"I think it would be difficult to act before the end of the year," Cardin said. "I also think there is a view here in Congress that you need to work with the new administration so that it's considered in conjunction with a Trump presidency."

He said he liked the concept of mandatory sanctions but understood the Barack Obama administration's request for more waiver authority.

Cardin said he's hopeful this Congress will pass his Global Magnitsky Human Rights Accountability Act, named after a Russian whistleblower who died in custody, either as an amendment to must-pass defense legislation or as a stand-alone bill. He said he's not aware of any active efforts to rewrite legislation that allows the families of victims of the 9/11 attacks to sue foreign governments, a priority for Saudi Arabia.

On Iran, Cardin said he expects the Senate to pass a clear 10-year extension of the expiring Iran Sanctions Act, which would allow the United States to "snap back" sanctions on Iran's energy sector if Tehran violates the nuclear deal. The House easily passed a clean reauthorization Nov. 15.

Cardin, who voted against the Joint Comprehensive Plan of Action, however, challenged Trump to work with the international community to strengthen the deal, rather than unilaterally rip it up. Trump has called the deal "disastrous" and said he wants to renegotiate it, without providing any details about how he would go about doing that.

"During the debate over the Iran nuclear agreement, I don't know of a member of Congress who felt that the preferred option was anything other than an agreement with Iran. That was a much better option than using the military option," Cardin said. "What do you replace it with? And do you have the support of the international community? … That's something the Trump administration's going to have to weigh and decide how they want to do it. And the support of Congress will depend upon what they do."

Cardin also said he would fight any efforts to slash foreign aid. Trump has created concern on that front with his nationalistic rhetoric and his rejection of foreign "nation building," leading Middle East countries to discreetly begin appealing to the incoming administration to keep the military and economic assistance flowing.

"Development assistance programs go to countries that need help for stability," Cardin said. "I hope that Congress will continue to weigh in pretty heavily on the need to use our smart power. … We'll be fighting for maintaining, and I hope expanding, the budget."