Will Total deal pave way for other oil majors' return to Iran?

After six years, French oil giant Total has become the first major Western energy company to return to Iran in what Tehran hopes is only the first step in the reopening of the Iranian market. 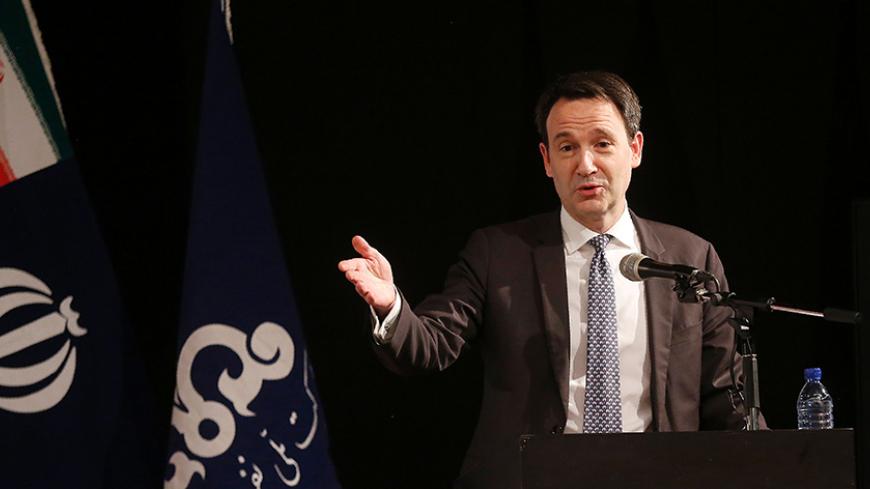 TEHRAN, Iran — French energy giant Total SA is back in Iran, six years after it was forced to halt its operations due to nuclear-related sanctions on Tehran. Leading a consortium with China National Petroleum Corp (CNPC) and Petropars, the company signed a heads of agreement with the National Iranian Oil Company (NIOC) worth $4.8 billion to develop phase 11 of the giant South Pars natural gas field. The project is expected to produce 2 billion cubic feet of natural gas per day. The preliminary agreement, due to be finalized by early 2017, gives Total a 50.1% stake. Other consortium members CNPC and NIOC subsidiary Petropars will take 30% and 19.9%, respectively.

The gas field, which is divided into 29 development phases on the Iranian side, is the world’s largest. The combined Iranian and Qatari sections of the field contain an estimated 19% of global recoverable gas reserves. Qatar’s section is referred to as the North Dome.

In 1997, the French energy major signed a deal to develop phases two and three of South Pars together with Malaysia’s Petronas and Russia’s Gazprom. In 2004, Total and Petronas also agreed to develop phase 11. That project, however, was handed over to CNPC in 2009 after complaints by Iran about delays on the part of Total and Petronas. The Chinese company also failed to make any progress and eventually pulled out in 2012. The project remained stalled for years afterward, as none of the proposals by a number of Iranian companies were finalized.

Officials from Iran and Total have hailed the new deal. Total CEO Patrick Pouyanne said the agreement is “in the interests of the country and the partners.” Meanwhile, Iranian Oil Minister Bijan Namdar Zanganeh thanked Total “for coming back to Iran at a difficult time again.”

The contract is the first international investment in Iran’s energy sector since nuclear-related sanctions on the Islamic Republic were lifted in January under the Joint Comprehensive Plan of Action (JCPOA), making Total the first Western company to return to Iran’s energy industry in the post-sanctions era.

To avoid US sanctions, Total says it will use euros to finance the development of phase 11 of South Pars. Of note, when the French oil major signed a contract with Iran in 1997 to develop another part of South Pars — despite US restrictions – the move prompted other international energy giants such as Royal Dutch Shell, Italy’s Eni and Norway’s Statoil to enter Iran.

Now, Iranian officials hope that the new contract with Total will be an “icebreaker” and encourage other foreign companies — including Western firms — to return.

In an interview with Al-Monitor, Michael Cohen, head of Energy Commodities Research at Barclays, said that Total’s return could pave the way for other companies to do so too — though under certain conditions. “Depending on the company and its ties to the US financial system and the US energy industry, Total’s re-entry could indeed pave the way for other countries. Iran’s energy sector holds much promise; this is without dispute. Yet, the election of Donald Trump introduces a new layer of uncertainty for foreign investors because it is abundantly unclear in what form the JCPOA will exist at the end of his term, nor is it clear what other sanctions the US government might introduce with a hawkish executive branch and a hawkish Congress.”

To lure foreign investment, the Iranian Cabinet has given the green light to a new template for oil and gas contracts known as the Iran Petroleum Contract. The IPC, which requires international investors to team up with Iranian companies to form joint ventures, offers better incentives to foreign actors compared with the country’s previous buyback deals.

The contract with the Total-led consortium is the first foreign agreement signed within the IPC framework. According to NIOC officials, nearly 70% of activities to develop phase 11 will be carried out inside Iran, with the country’s workforce conducting 95% of activities.

These features, according to international energy consultant Mahmood Khaghani, are among the “significant expedient” factors that are positives for Iranian small- and medium-scale businesses. “It is promising for these industries that they can enter contracts with European and Asian companies to assist in providing goods and services for projects such as phase 11, and they can have a hand in importing modern-day technology,” Khaghani told Al-Monitor, adding, “Such a policy is in line with the ‘resistance economy’ [goal] to make the economy less vulnerable in the face of possible shocks.”

Relatively oil-dependent Iran needs $200 billion of investment over the next five years to develop its energy sector. Experts like Cohen believe that Iran has to take a number of factors into consideration to succeed in attracting foreign investment. He told Al-Monitor, “Like attracting investment in any foreign country, Iran needs to highlight the attractive resource base by deciding on unified terms and details for the IPC, and affirm contract sanctity and rule of law when it comes to foreign investment. It is more than just a sanctions issue for investors; it is also the banking sector: As long as these investors and their financiers continue to face reputational concerns and see evidence of illicit finance and corruption, it will be very difficult to invest.”

While some experts believe that continued low oil prices will be another hurdle for Iran to attract new investment, Iran is continuing its drive to lure foreign companies. Schlumberger Ltd., the world’s largest oil driller by market value, announced on Nov. 27 that it has signed a preliminary deal to study an Iranian oil field, making it one of the most important contracts signed after the election of Donald Trump. Prior to that, it was announced that Norway’s DNO had signed a deal to study an oil field in western Iran.

Although most energy giants remain cautious about re-engaging with Iran — partly because of the remaining US sanctions — companies such as BP are exploring new measures to overcome such obstacles, like creating a new executive committee outside the United States to assess business in Iran, all in an effort to avoid possible violation of American restrictions. Given expectations of more of these kinds of measures by international oil majors, Iran could well be positioned to announce more energy projects in partnership with global oil giants sooner rather than later.