Iran's first energy deal since the lifting of nuclear-related sanctions on the country is a major breakthrough in the development of the massive South Pars gas field. 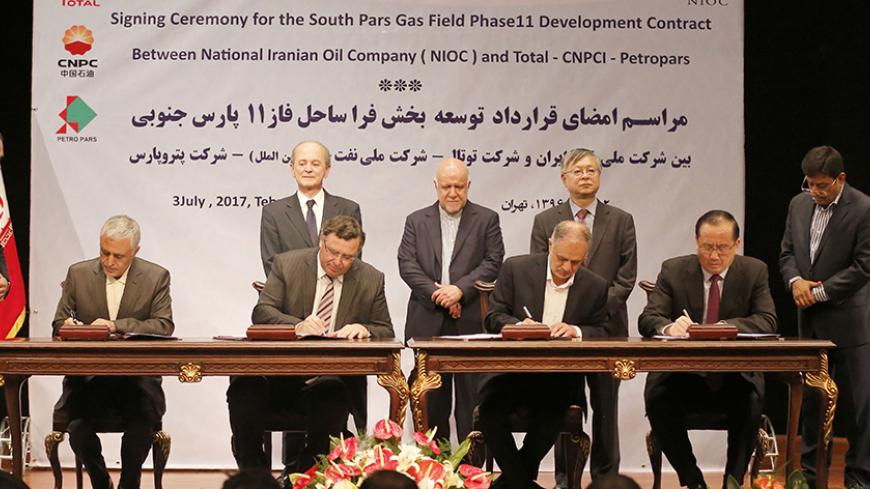 Two years after it agreed to reduce its nuclear program in exchange for the lifting of international sanctions, Iran has signed its first energy deal. France’s Total SA and the China National Petroleum Corporation (CNPC) agreed to a $5 billion deal to develop Phase 11 of Iran’s South Pars offshore gas field, one of the largest in the world.

Iran’s Oil Minister Bijan Zanganeh hailed the deal, attributing it to both the nuclear deal and the presidential election that gave President Hassan Rouhani a second term. Zanganeh also said July 3 that Iran would not be opposed to signing energy deals with the United States; however, it is the Americans themselves who do not want to.

Mohammad Bagher Nobakht, spokesperson for the Rouhani administration, also credited the nuclear deal and the election with the signing of the contract, noting that the deal was struck despite “America’s attempts to create an anti-Iran environment.”

Reformist media outlets that have supported the moderate Rouhani administration and its policies were jubilant over the news. Shargh Daily's front-page headline called the deal the “breaking of the petroleum dam.” Before Iran’s nuclear deal, even the country’s oil was hard to move. Iran had difficulty finding customers and was forced to barter due to banking sanctions.

Etemaad News also gave the deal front-page coverage. “The spell on petroleum investment has been broken,” read its headline. Vaghayeh Etefaghiyeh’s top story was headlined, “A historic day for Iran’s petroleum.” Its article argued that the venture would create jobs, which after the nuclear deal has become one of the top concerns for Iranians.

The deal was not without its critics. Jalil Salari, the former managing director of the National Iranian Oil Products Distribution Company, criticized France’s record of petroleum investment in Iran. Salari said that unlike Japanese and Korean companies, French companies have previously resisted paying fines to Iran when due. Zanganeh addressed the potential conflict when he announced the deal, saying that if Total does give information to Qatar, with which Iran shares the gas field, Iran will file a complaint and seek compensation.

Salari also criticized the terms of the deal, calling it “worrying” to make a French company a decision-maker in such an important gas field. Total’s stake will be 50.1%, CNPC’s 30% and Iran’s Petropars 19.9%. Zanganeh estimated that the project will eventually produce $54 billion of gas. Salari criticized Zanganeh for relying on a foreign company to develop the gas field and accused him of neglecting domestic industries.

Javan, which is linked to the Islamic Revolutionary Guard Corps, reported that the deal with Total for Phase 11 of South Pars has been held up by production issues since 2001. According to the report, Total was originally involved in Phase 11 of South Pars but left it in 2008 before approaching Zanganeh in 2014 to restart the project. The article rejected claims by Oil Ministry officials who claimed that Petropars would be deeply involved in the decision-making process. Javan reported that when it comes to the sharing of technology, which is a significant part of the project, Petropars would not play a major role.

Zanganeh rejected the criticism, saying that “there are only a few who are opposed” and that some opposition was “natural.” He added, “This is a point of pride for the administration, that the opposition is so free to state its criticism.”