Determined to head off further expansion of a contiguous Kurdish-run zone along its borders, Turkey is counting on the rebels it's backing in Syria to take al-Bab. 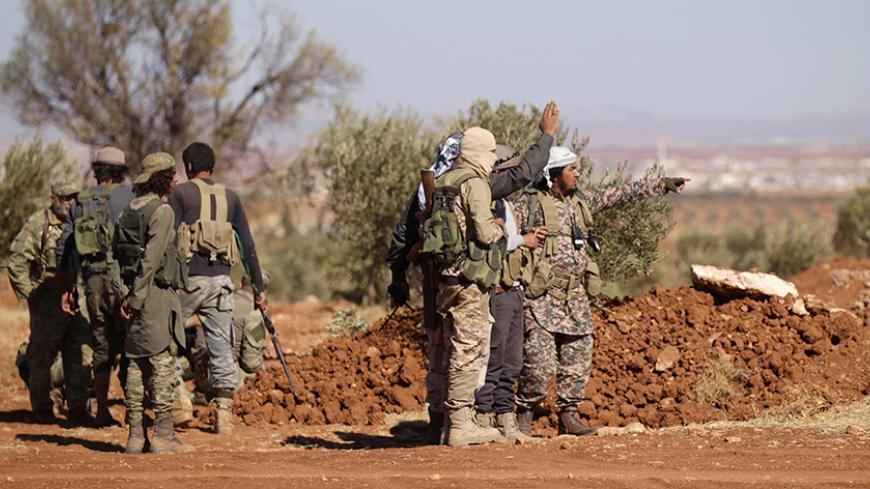 Syrian rebels mentored by Turkey said they were positioned to launch an assault to drive the Islamic State out of the strategic town of al-Bab today, but it remains unclear whether they will actually throw themselves into what most analysts agree will be a bloody battle.

Pro-government dailies trumpeted the news of the Turkish-backed rebel advance, saying the forces were only 2 kilometers (1.2 miles) from the mainly Sunni Arab town. But the English-language Daily Sabah quoted a Free Syria Army commander as saying the operation “could take days or weeks.” The commander added, "We will see how reinforced [IS] is in the town.”

Al-Bab has emerged as something of a test of Turkish resolve in Syria, not against IS but against the Syrian Kurds. The Syrian Kurds are desperate to lay their hands on al-Bab because it would allow them to link the large, uninterrupted swath of land they rule east of the mainly Arab town of Manbij to the mainly Kurdish enclave of Afrin that lies further west. Turkey says it will not permit further expansion of a contiguous Kurdish-run zone along its borders but has faced stiff resistance from Russia, which controls the skies over al-Bab.

Until recently, most analysts concurred that Russia would prevent Turkey’s rebel proxies from taking al-Bab because of the threat they would pose to Syrian regime forces in Aleppo, just as they appear to be gaining control over the war-ravaged city. And while Turkey has backed the rebel advance from the ground, Turkish jets have not taken part in any offensive action since last month’s wave of sorties against Syrian Kurds, presumably because of Syrian threats to shoot them down.

But Turkish airstrikes on Syria resumed over the weekend, hitting 15 IS positions near al-Bab. Many speculate that Ankara has struck some kind of deal with the Russians — and by extension with the Syrian regime — over Aleppo. The prevailing wisdom is that the agreement involves Turkish pledges to rein in rebel forces, notably the al-Qaeda-linked group Jabhat al-Nusra, which continues to rely on logistical supply lines from Turkey for its operations in northern Syria.

Last week, US President Barack Obama ordered the Pentagon to find and kill leaders of the group, which remains the most effective fighting force against the Syrian government.

All of this is unfolding in the wake of Donald Trump’s surprise victory in the US presidential elections. Trump’s previous comments about Syria suggest that he is more closely aligned with the Russian position and that he is not in the least bit interested in deepening US engagement there other than to defeat IS and other jihadist groups.

Indeed, some pundits suggest that he may pull the plug on CIA-vetted Syrian rebels.

Ankara had long hoped that if Democratic candidate Hillary Clinton were to win, as she was widely predicted to, that she would fulfill pledges to create a safe haven for the rebels, action that could eventually lead to the overthrow of the Syrian regime.

Turkey may now have decided to cuts its losses and stomach some kind of reconciliation with the regime, if only to join forces against the Syrian Kurds.

The Syrian Kurds are the one issue on which Ankara and Damascus hold a common view: that their aspirations of self-rule must be crushed. And even before the US election, Ankara had been putting out feelers to Syrian President Bashar al-Assad. Yet Russia views the Syrian Kurds as a useful lever both against Turkey and the Assad regime. It is therefore improbable that Moscow would ditch them altogether.

“We don’t really understand what is going on in al-Bab — or in Syria in general, for that matter,” said Syrian Kurdish commentator Barzan Iso in a Skype interview with Al-Monitor, echoing a widespread view among Syrian Kurds. The situation is likely to remain murky at least until Trump takes office. In the meantime, Turkey will seize on the transition hiatus to press forward with its own goals.