Kremlin unsure how to take Erdogan's vow to topple Assad

A Russian diplomat has expressed confusion and cautious disapproval over Turkish President Recep Tayyip Erdogan openly saying that Turkey's main objective in Syria is to topple the regime. 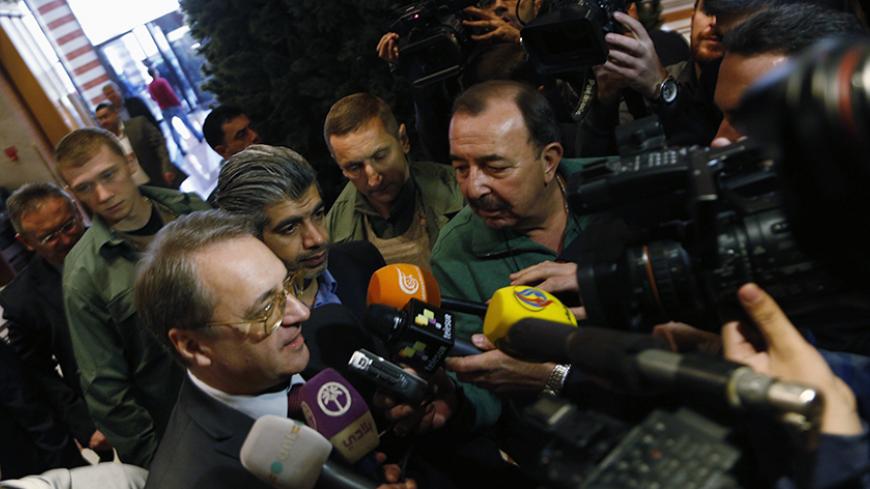 A top Russian diplomat rebuked Turkey’s president over his comments on Syria today, saying they contradict international agreements on the war-wracked country. Russian Deputy Foreign Minister Mikhail Bogdanov told Russian news agencies Nov. 30 that his government was puzzled by Recep Tayyip Erdogan’s assertion a day earlier that Turkey was in Syria for no reason other than to topple President Bashar al-Assad. "We are there to bring justice. We are there to end the rule of the cruel Assad, who has been spreading state terror," Erdogan said.

His words flew in the face of Turkey’s earlier claims that it had sent its troops into northern Syria to battle the Islamic State and the Syrian Kurdish militia known as the People’s Protection Units: It's against all international agreements that Turkey is party to “if Erdogan plans to wage war,” on Assad, Bogdanov said.

In separate remarks, Kremlin spokesman Dmitry Peskov told reporters, "It is a very serious statement and one which differs from previous ones and with our understanding of the situation. We hope that our Turkish partners will provide us with some kind of explanation about this."

There has not been any yet.

Russia and Iran are the Syrian regime's chief allies in the war against opposition rebels who are, in turn, supported by Turkey, various Gulf states and in part by the CIA. But in recent months Turkey has signaled willingness to rein in the one group that poses the biggest threat to Assad’s rule — the al-Qaeda-linked Jabhat al-Nusra, which now calls itself Jabhat Fatah al-Sham. The shift followed a frenzied campaign by Turkey to woo back Russia after the pair fell out over Turkey’s downing of a Russian jet in November last year.

Analysts reckon Erdogan’s latest spate of hawkishness has more to do with placating his own Islamist base than with yet another U-turn in Turkey’s thus far disastrous Syria policy. There is growing anger over the silence of the international community in the face of civilian massacres in Aleppo as regime forces backed by Russia and Iran bludgeon their way toward apparent victory. But while few of Erdogan’s supporters dare say so, there is also mounting frustration at the Turkish government’s perceived unwillingness and inability to reverse this tide. Their feelings were summed up by Ibrahim Karagul, the editor-in-chief of the pro-government Yeni Safak, who vowed that the people of Aleppo would be avenged, and that it would be “very bitter.” But he failed to mention just how.

When Ankara first threw its support behind the Syrian rebels in 2011, offering them bases inside Turkey and becoming the main conduit for weapons flowing in from their Gulf benefactors, Erdogan cheerfully predicted that victorious Turkish leaders and their Syrian allies would “inshallah” be praying in the famed Ummayad Mosque in Damascus “in the shortest time possible.”

Such plans have yet to materialize. Instead, Turkey is stuck with almost 3 million Syrian refugees, a Syrian Kurdish statelet on its borders and its troops bogged down in northern Syria with no clear exit strategy.