Is it time for a national settlement in Iraq?

The predominantly Shiite National Alliance that constitutes the majority of the Iraqi parliament released a document for national reconciliation for the post-Islamic State phase, though it is far from being implemented on the ground. 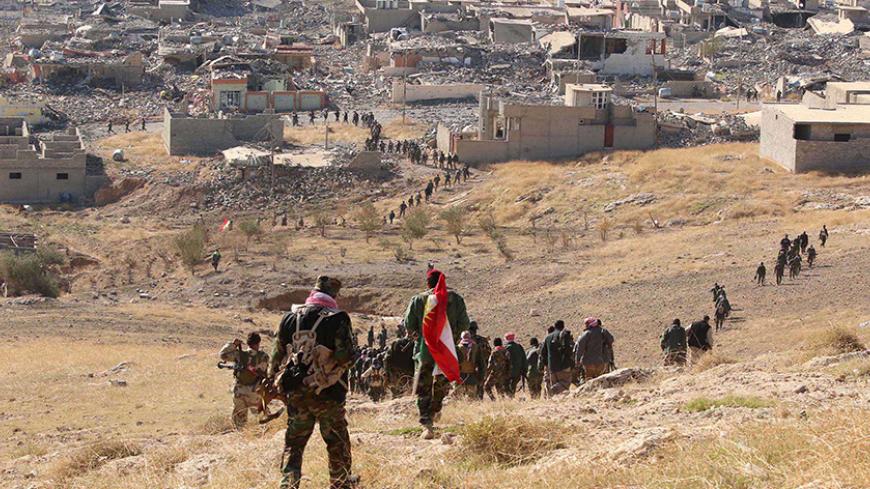 Members of the Kurdish peshmerga forces gather in the town of Sinjar, Iraq, Nov. 13, 2015. - REUTERS/Ari Jalal

NAJAF, Iraq — On Oct. 31, the Iraqi National Alliance announced the “Historical Settlement” document it recently drafted. The alliance has been working for more than a year to finish this document in order for it to be a national anchor to reach a final historical settlement for the post-Islamic State (IS) phase.

Today, as IS is about to be completely eliminated from Iraq, one must wonder whether it is finally the time for Iraqis to achieve a historical settlement in order to put an end to their conflicts that have accumulated over the years.

The document states that it represents the National Alliance’s consensual vision aiming to achieve “a national settlement that would result in a historical Iraqi reconciliation.” The United Nations Assistance Mission for Iraq (UNAMI) has pledged to make political efforts, such as “rallying support for the process of national reconciliation and pushing this initiative forward locally, regionally and internationally.”

All of the National Alliance’s components have agreed to allow UNAMI to “define and settle the official representation of all Iraqi components and parties, in a way that suits everyone, as well as address the parties disrupting the settlement, as per the measures adopted by the UN.”

Thus, UNAMI will draft the final version of the national settlement as long as “it is approved by both the parliament and the Cabinet and all Iraqi parties abide by it.” UNAMI will raise “support and insurance from international and local institutions, namely the Arab League and the Organization of Islamic Cooperation.” It will work also on “rallying the necessary support from the regional countries in order for the agreed-upon national settlement to succeed.”

In addition, the UN via UNAMI will take it upon itself to “support the government and the Iraqi parties taking part in the national settlement in order to achieve it, in addition to exercising all its powers to promote and protect the settlement from any party that wishes to disrupt it or threaten to prevent implementing its provisions, be it Iraqi parties or regional countries.”

The document stated that all Iraqi parties are included in the settlement, pointing out that the National Alliance wishes to reach an understanding with “all active forces in Iraqi society, whether they are within the frameworks of the government or the political process or outside of it,” including the opposition forces, even the “armed groups,” with the exception of IS. The settlement shall be achieved in virtue of the constitution in order to reach a “historical agreement with all parties committed to the principles of the initiative.”

The document has developed practical and realistic topics for the settlement to tackle, such as, “working on the distribution of powers and the decentralization that would govern the relationship between the federal government, the [Kurdistan] Regional Government [KRG] and provinces according to the federal system, as well as actually committing to the need for equitable distribution of wealth according to the population in each province,” and considering "the oil, gas and water wealth such as rivers, lakes and dams in addition to monuments and archaeological sites a national treasure for all Iraqis,” and finally working on addressing “all forms of demographic change, the return of displaced people to their homes and the reconstruction of damaged areas.”

Head of the National Alliance Ammar al-Hakim began to show openness toward the political blocs outside of the coalition and held meetings with them. However, Nazem al-Saadi, a member of the National Alliance, told the media that the alliance “will not deal with neither those involved with foreign intelligence services nor those who do not believe in the political process and are rooting for division.” He added that the alliance will launch the “Historical Settlement” initiative once Ninevah province is completely liberated.

In an Oct. 24 press statement, Hakim expressed his optimism about the settlement, saying, “The relationship between the Sunnis and Shiites in Iraq is almost mature and on the right track. All parties have started letting go of their illusions and fears. This relationship is at a very advanced stage and we will move forward from here on out.”

The background of the “Historical Settlement” document went back to the time that the government of Haider al-Abadi was formed, following an agreement between the Shiite, Sunni and Kurdish political forces, through which Abadi committed to proceed with a project of national reconciliation within the consensus government, as per the principles of federalism and the distribution of powers and wealth equitably among all of the country’s components.

Abadi has already shown that unlike his predecessor, Nouri al-Maliki, he is committed to his obligations toward his partners in power. He has achieved important parts of the reconciliation project, including the Amnesty Law that parliament voted on in August. The government also completed the project of “Public Authority to monitor the allocation of federal revenue law” for the equal distribution of wealth among the various Iraqi provinces and the KRG, which the parliament voted on on Nov. 5.

Abadi has relatively succeeded in curbing the Shiite militias operating under the umbrella of the Popular Mobilization Units, which has legally become a part of the Iraqi state under the authority of the prime minister. Abadi was able to recently resolve most disputes with the KRG after a historical visit by KRG President Massoud Barzani to Baghdad Sept. 29. This is in addition to his success in reuniting all Iraqi military forces, including the army, the peshmerga forces, militias and Sunni tribes as well as others in the fight against IS, especially in the ongoing battle to liberate Mosul.

This is confirmed by one of the most prominent professors in Middle East Studies at Brandeis University, Kanaan Makiya, a major contributor to rallying the military alliance that toppled the Baathist regime in 2003, headed by the United States.

Makiya told Al-Monitor that although the "Historic Settlement" initiative giving the UN a role in Iraq is a positive matter, the situation on the ground is more important; the national reconciliation efforts made since 2003 are yet to result in concrete and practical measures.