Will Benkirane be able to form new Moroccan government?

Morocco's recently reappointed prime minister needs to overcome huge challenges to reach a consensus and form a government, as the partisan bloc that is close to the royal palace has set conditions for taking part in a government led by Islamists. 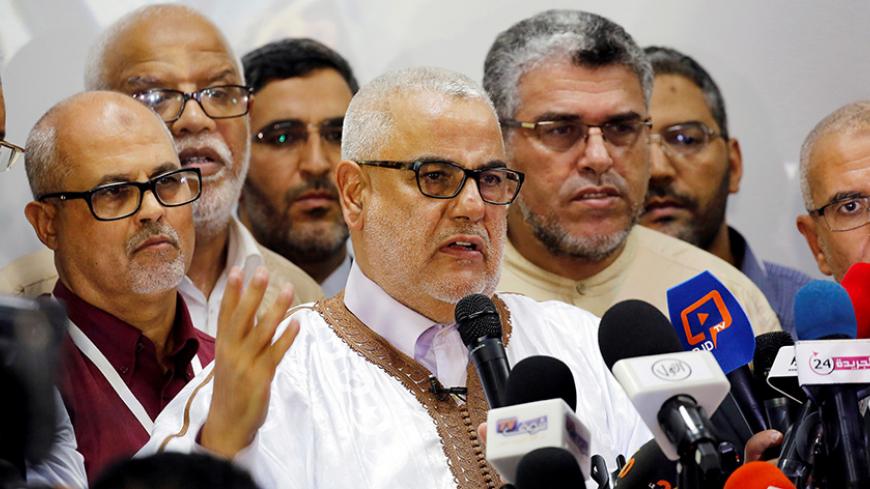 Politicians in Morocco are hitting some hurdles as they work to form a postelection government.

King Mohammed VI, in his capacity as head of state, on Oct. 10 named Islamist Justice and Development Party (PJD) head Abdelilah Benkirane to a second term as prime minister. More than a month later, however, Benkirane finds himself in trouble.

So far, Benkirane has failed to secure the needed majority to win a vote of confidence in parliament, after a new partisan bloc — consisting of the National Rally of Independents (RNI), the Popular Movement (MP) and the Constitutional Union — was formed. The bloc is demanding to participate in the government as a single bloc. Benkirane, his party and his allies — the nationalist Independence Party (IP) and the leftist Party of Progress and Socialism (PPS) — had previously announced they would name the ministers in the new government; they have rejected the bloc's demand.

Benkirane has been prime minister since 2011. He told Akhbar al-Youm daily newspaper on Nov. 5 that if he fails to form a government by consulting with other parties and securing a majority to form the council of ministers, he will inform the monarch and go home. He said he will not be forced into a corner by any party. The obstruction is being caused by RNI, which was established by the administration and is close to the palace.

The new three-party bloc represents 83 seats in parliament: RNI (37), the Constitutional Union (19) and the Popular Movement (27). The parties, which are close to the palace and have no historical and ideological background, can become a "blocking third.”

The PJD's leadership said Nov. 2 that it opposes the bloc's demand to be recognized as a single entity. It said in a statement, “The conditions that need to be taken into account in the government formation are the respect of the people’s will, … democratic norms, and expectations of the citizens, who contributed to the victory of the Justice and Development Party” in the Oct. 7 elections.

The RNI is led by Aziz Akhannouch, who the palace trusts and who was unanimously elected head of the RNI following an extraordinary conference. The RNI is demanding that Benkirane not include his ally, the Independence Party, in the government. This is a tough condition that brings negotiations to an impasse.

Many observers, including political science researcher Abdul Rahim Allam, said the current situation can only be interpreted as part of the royal authority's efforts to curb Islamists and maintain control by ensuring the king's allies are part of the government.

“Since its inception, [RNI] has implemented well-known policies and agendas. After the elections, it became clear that it will be assuming an important role in the government formation," Allam told Al-Monitor. "The announcement of an alliance with the Constitutional Union and the current coordination with the Popular Movement were not out of the blue. The alliance is designed to avoid the failure of the previous Authenticity and Modernity Party [PAM] to defeat Islamists. The palace [authority] wants a strong administration party that is close to inside the opposition and wants its parties to have a stronger presence within the government. The palace can never allow a government to be only composed of Islamists and historically nationalist parties.”

He said the election of Akhannouch, a close associate of the palace, is a clear message about the palace’s ambitions.

"Aziz Akhannouch came to tell Benkirane that the Independence Party is not desirable and is not to decide [participate in the government's formation]. This seems a sanction [on the IP] for disengaging from [the PAM], which served as a card in the hands of the palace in the previous stage. Also, [the PAM] tried to obstruct the government's formation by calling on the rest of the parties to form a bloc opposing any alliance with Benkirane, to isolate him,” Allam added.

Political analyst Omar Cherkaoui, a professor at Mohammed V University in Rabat, compared the current situation to a large market where supply is not in line with demand. He told Al-Monitor, “Some parties do not want to abide by the Oct. 7 ballot results. The problem now is that the Popular Movement and the [RNI] are acting based on the idea that they were partners in the previous government's coalition. Thus, they are imposing themselves as the ones who will decide" the direction of the new bloc. "They believe that the election's results endorsed the coalition as a whole.”

While each party insists on its stance, and two competing blocs have emerged, Benkirane is apparently facing the complex task of reconciling between all of these components — by fulfilling his commitments to his partners and reassuring the palace — to ensure good ties with the latter in his new term.

Cherkaoui believes time will resolve a number of problems. “I believe that Benkirane has gained a lot of experience and pragmatism in the management of such conflicts. The question is, how he will deal with the cards of the Independence Party and the [RNI], while he really needs them both, as each has an importance. The Independence Party is the largest force in the Assembly of Councilors [the lower house of parliament] and will ensure [Benkirane] a majority there. In contrast, the [RNI] is a reassurance card in terms of the ties with the palace. Thus, the solution lies in Benkirane's ability to reconcile the parties’ demands, which is a hard task, particularly since both parties are competing to obtain almost the same ministerial portfolios.”

Yet Allam believes that the condition of keeping the IP away from the government is a mere attempt to weaken the alliance, which includes the PJD (125 seats), PPS (12) and IP (46). He added, “I believe that these conditions are mere political maneuvering; the conflict now has focused on the number of ministers who will represent the palace in the government, in addition to the technocratic ministers. The goal is to prevent the [PJD] from being a strong party in the government, and we know that winning the elections is not [necessarily the same as] a victory in Morocco. The [PJD] could turn into a minority within the government.”

The PPS, which won 20 seats in the Oct. 7 elections, has expressed its willingness to take part in the government, but is still waiting for Benkirane to make his offer, a PPS source told Al-Monitor.