Morocco finally gets new government, but at what cost?

The announcement of a new Cabinet in Morocco after months of difficulty revealed that the Islamist Justice and Development Party (PJD) may have had to pay a heavy price for compromise. 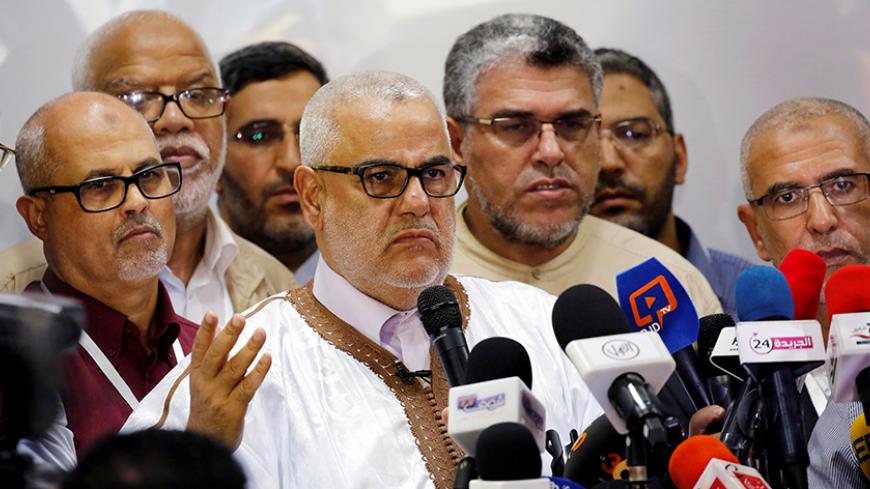 Now that Morocco has a new Cabinet and prime minister, the dust is finally settling after six months of wrangling over the appointments — though one journalist described the outcome as a “dangerous democratic setback."

The new 39-member Cabinet, which was announced April 5, has 13 first-time appointees representing six of the 10 parties that participated in the election.

The PJD, led by Benkirane, had rejected conditions proposed by other parties supported by the king and refused to include the Socialist Union of Popular Forces (USFP) in the governmental coalition. In fact, Benkirane had vowed that, come hell or high water, the socialist party would not be involved in the government as long as he was prime minister. His refusal might have stemmed from the USFP not negotiating with him directly to participate in the government; instead, it joined a bloc of four parties to negotiate.

It seems the PJD had to face reality, as further opposition would have pitted it against the king and violated the party’s political principles — to focus on gradual reform and to avoid radically opposing the king. Consequently, Islamists had to accept the palace's demand for coexistence, giving the party only a limited role that doesn't match its public base and electoral weight.

Othmani agreed to involve the USFP in the governmental coalition. The party caved in and made painful concessions that might have tough repercussions in its future. Complaints were leaked from the PJD describing the concessions as “treacherous” and “contradictory to Benkirane’s approach.”

Benkirane, a moderate Islamist, was willing during the negotiations to form the government with National Rally of Independents leader Aziz Akhannouch, as he gave up his condition to include the Istiqlal Party in the government and agreed to the presence of the Constitutional Union. However, he escalated the tone of his rhetoric against the remaining political parties, which he accused of impeding government formation. He repeatedly said attempts to draw a new political map would turn the PJD into a minority within the government despite the single party winning 125 parliamentary seats out of 395 total.

He was right. The four-party bloc led by Akhannouch and backed by the king was given strategic portfolios in the government like economy, finance, agriculture and commerce. The bloc got a total of 17 ministries, compared with the PJD's 11. Among the new Cabinet are 25 technocrat ministers close to the king.

Abdul Rahim al-Allam, a political science researcher at Cadi Ayyad University in Marrakech, said the king achieved the goals he sought by preventing formation of a Benkirane-led government. He undermined the Islamists, making them a minority in the government they lead and giving them marginal ministries. The king also managed to get rid of the sometimes unruly but widely popular Benkirane who, despite his loyalty to the king, stirred an internal PJD crisis.

“This is undoubtedly the first real internal crisis that the Islamist party has faced since its establishment in 1998," Allam told Al-Monitor. "The party faces several challenges due to the multiple last-minute concessions and the approval of the appointment of a new leader instead of Benkirane. The members’ agreement to the conditions that Benkirane had previously refused condemn him and verify the story of his adversaries, who blamed him personally for the stalled government formation.”

“The situation does not look promising for Islamists. It will be hard for them to defend a government in which they play a marginal role. Benkirane’s take on these developments is also influential. He has so far tried to distance himself and refrain from giving negative or positive comments on the concessions. If he openly voices his support for Othmani, any signs of a crisis would vanish. But his silence will not be as reassuring because it might be interpreted as lack of consent," Allam said.

“Othmani would then lose his party’s internal support. Besides, the Islamist public base is closely linked to Benkirane, as he represents demagoguery that goes beyond political conviction.”

Bilal al-Talidi, the former editor-in-chief of the Islamist-affiliated Al-Tajdid newspaper, said that although the PJD is going through tough times, he doesn't expect internal divisions and he believes the party’s upcoming national conference in September will be decisive in determining political guidelines.

“The concessions that Islamists made during the government formation after Othmani’s appointment definitely affected the party, and there is a general state of anger that the Oct. 7 results triggered, amid attempts [by other parties] to weaken the party and increase disagreements within it," he told Al-Monitor.

“This is a moment of dangerous democratic setback necessitating re-evaluation of the democratic transition," he said, adding that the upcoming conference will determine how best to face current circumstances. "The suggested options include calling for Benkirane’s return as leader of the party by changing the party’s organizational law. But I think the PJD will remain united because it is a party of institutions. So far, it has only expressed stances that do not attack Othmani as a person, but rather reflect a conviction that overruling Benkirane’s approach would cost the party a high price, and the successive concessions serve as proof.”

Talidi thinks Benkirane stepped aside and did not announce a firm stance after his dismissal because he did not want to clash with the king or burst Othmani’s bubble. This is why he did not participate in Othmani’s deliberations with the other parties or in meetings to choose the party’s ministers.

The PJD’s hopes are hanging on its upcoming conference, which will be decisive. The party is torn between opposing currents. One is led by Benkirane’s supporters, who want him to remain at the helm of the party and are calling for distance from the current government. The other current wants to weaken the PJD and claims it is the party’s duty to support the government despite modest participation in it.