New generation of jihadis poised to replace IS in Iraq

Though the Islamic State is being chased out of Iraq, its disappearance will only herald an upsurge in new militant groups until the conditions that gave it a foothold are a thing of the past. 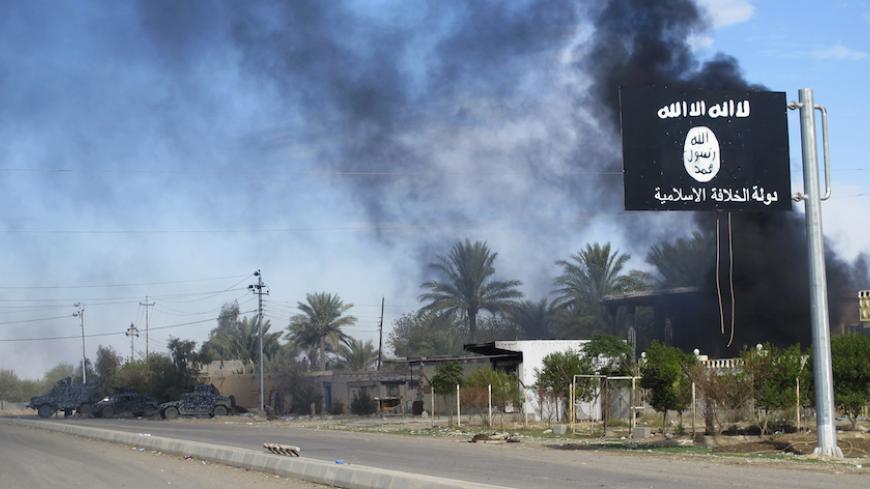 Smoke rises behind an Islamic State flag after Iraqi security forces and Shiite fighters took control of Saadiya in Diyala province from IS militants, Nov. 24, 2014. - REUTERS

NAJAF, Iraq — During his speech at the third Middle East Forum held in Erbil Oct. 26, Iraqi parliament Speaker Salim al-Jubouri warned of future threats from the Islamic State (IS), saying that the terrorist organization “will not follow the same tactic once defeated in Mosul and will seek to reinvent itself to produce a new generation of terrorists with the ability to cope with the post-defeat phase and meet the resulting challenges.”

The results of an investigation, published Oct. 19, showed that over the past two years of controlling Ninevah province and other Sunni areas in Iraq, IS has managed to indoctrinate and militarily train 4,000 children to carry out suicide attacks and other terrorist tasks in the future. Europol warned July 30 that these child recruits will be the new generation of jihadis.

IS calls these young recruits the “Caliphate Cubs.” They have received radical ideological teachings based on those of Ibn Taymiyyah, Muhammad Ibn Abdul Wahhab and other Salafist jihadi imams, turning them into ticking time bombs who might end up committing even more violence than IS itself. The Iraqi government has yet to create rehabilitation programs to bring this massive number of young people back into the community.

IS militants reportedly went into hiding after Iraqi forces entered the city from the west on Oct. 31.

A senior Iraqi intelligence official told Al-Monitor on condition of anonymity that a number of IS elements have managed to escape from Mosul and head toward the Syrian border or the Jazira region, jammed between Anbar, Salahuddin and Ninevah provinces. In response, Iraqi forces have launched major operations to purge the region of IS elements in parallel with the battle to liberate Mosul. It is no easy task in the wide, sparsely inhabited Jazira region.

It is clear that IS has lost its popular bases within the Sunni communities, and it has been a long time since the welcoming ceremonies and pledges of allegiance to the organization ended. In an effort to avoid backlash and resistance on the part of these communities, Iraqi Prime Minister Haider al-Abadi has banned the Popular Mobilization Units from entering Sunni areas.

IS has lost many of its financial resources after being pushed out of the Syrian and Iraqi oil regions and the tight international restrictions on its foreign sources of funding.

The political environment that had served as fertile ground for the emergence of IS and the silence on its expansion are no longer. Today, none of the key regional powers — Iran, Saudi Arabia and Turkey — have any interest in supporting the organization or are trying to exploit it for political gains. All major players are now competing in the liberation battles to get the biggest share of the spoils of war, meaning extending their influence over the extremely strategic Ninevah province.

For instance, Turkey did not lift a finger to deter IS when it first emerged and began to expand. But now Turkey is sticking its nose in the battles for liberation and does not hide its seeking of gains in Iraq.

This does not mean that the jihadi movements are gone forever. Quite the opposite. The internal and regional conflicts over the Sunni areas will prepare the ground for the emergence of a new wave of jihadism.

Jihadi movements have demonstrated their dynamic ability to cope with new developments, reinventing themselves according to the factors and conditions of each stage. Every time a wave of jihadi movements is quelled, an even more brutal one reappears to astonish the world with its ability to produce chaos in the region and spread beyond it.

Thus, Jubouri's warning draws from the evolution of jihadi movements and Iraq's history of being fertile ground for their emergence. In fact, Jama'at al-Tawhid wal-Jihad was a militant jihadi group that started its network in Iraq in the 1990s and picked up stream following the country's occupation in 2003.

In October 2004, the group’s leader, Musab al-Zarqawi, decided to forge an alliance with small factions, dubbed the Organization of Jihad's Base in Mesopotamia, to serve as al-Qaeda’s main branch in Iraq back then.

The organization, however, began to crumble after the death of Zarqawi on June 7, 2006, and at a time when the Sunni Awakening movement started to impose its influence and expelled members of the organization from its areas.

The pro-jihadi groups continued their work under the banner of the Islamic State in Iraq led by Abu Omar al-Baghdadi, who was killed in April 2010.

This is when Abu Bakr al-Baghdadi appeared and reinvented the approach and tactics of the terror activities from centering on hit-and-run attacks to seeking the establishment of a state along the lines of an Islamic Caliphate.

Iraq’s western and central deserts, known by the name of Jazira, between the Euphrates and the Tigris north of Baghdad to the Syrian border, served as a safe haven for the group and a launching pad for its terror actions in various cities of Iraq.

The breakout of chaos in Syria was Baghdadi’s golden opportunity to officially apply the concept of a state, first dubbed as the Islamic State of Iraq and the Levant and then the Islamic State after gaining control of a third of Iraq's territory in mid-2014.

Iraq is still a source of potential recruits who are ready to join jihadi groups, due to the ongoing identity and sectarian struggles in the country and the region generally that feed jihadi organizations, justify their presence and ready the ground for their regrowth after each setback.

In this context, US President Barack Obama said in a statement about his policy to combat IS in July 2015 that fighting the organization will be “a struggle for generations in Iraq,” because “ideology cannot be defeated with weapons but with new alternative ideas.”

Ultimately, the end of IS does not mean only one organization, as other small fundamentalist groups would mushroom in other areas and return to create more chaos. Confronting the conditions of jihadism requires a comprehensive plan supported by the international community and regional powers addressing the economic, political and social aspects of the issue.