Rabbis speak out against women's enlistment in IDF

The national-religious sector, well represented in the Israel Defense Forces, maintains strong opposition to enlistment by women, and recent proposals to encourage religious women to enlist have met stiff resistance from a group of rabbis. 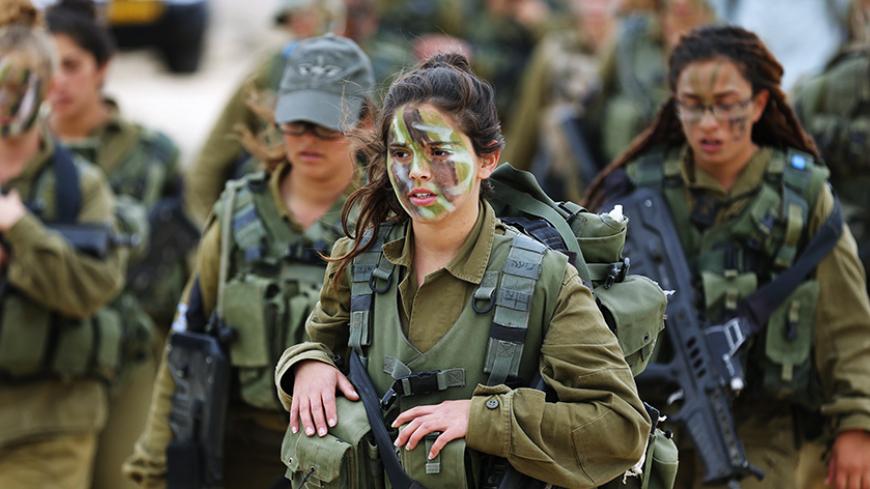 Israeli soldiers from the Caracal battalion take part in a 23-kilometer (14-mile) march to mark the end of their training in Israel's Negev desert, near Kibbutz Sde Boker, Feb. 14, 2013. - REUTERS/Darren Whiteside

For years, the Israel Defense Forces have been dominated by the national-religious sector, which demonstrates a high motivation to serve, especially in combat units. However, in that same demographic there is institutionalized opposition to the military recruitment of women, mainly due to modesty issues. Instead, national-religious women may perform national service as volunteers in hospitals, educational institutions and social-welfare organizations.

This issue has been quietly debated for years. However, it has recently come to public attention through a petition by dozens of national-religious rabbis calling on the head of the national-religious HaBayit HaYehudi party, Education Minister Naftali Bennett, not to fund nongovernmental organizations that encourage religious women to enlist in the IDF. The Education Ministry recently floated an initiative to create and fund such associations.

The petition, signed by prominent rabbis of the national-religious stream, is called “National Service is Preferable.” In its introduction, the petition reads, “The position of the religious Zionist rabbis regarding the issue of the enlistment of women into the [IDF] has always been consistent with the position of the Chief Rabbinate of Israel — that religious girls should not serve in the military.” Simultaneously, 12th-grade girls from religious, gender-segregated high schools signed their own petition and submitted it to Bennett. In the document, they called on the minister to retract his decision to underwrite programs that would encourage women to enlist, which they feel conflicts with the values of religious Zionism and the Torah.

When the State of Israel was first founded and the draft law was passed, Prime Minister David Ben-Gurion agreed to exempt certain groups from military service. The law exempts pregnant and married women as well as unmarried women who practice a religious way of life from mandatory service. This position became the official stance of the Chief Rabbinate. It is also the official position of the national-religious public school system.

“Recent years have seen consistent attempts to encourage girls to serve in the IDF, despite the opposition of all the important rabbis in the national-religious movement. This trend was born within the Religious Kibbutz Movement,” Rabbi Amital Bareli, the founder and CEO of the Chotam organization, told Al-Monitor. Chotam, whose purpose is to “restore Judaism to the top of the public agenda,” is the organization behind the rabbis' petition. “In our view, the military framework is not appropriate for women in general and for religious women in particular. We are talking about an aggressive, combative system with numerous modesty-related problems that run counter to the lifestyle of the religious woman. There are all kinds of organizations that are using the army to promote their egalitarian viewpoints. They are even trying to advance women to [more] combat positions. These are outrageous notions that are trying to change us into an egalitarian army instead of a winning army.”

There is a relatively small group within the national-religious sector (currently about 10,000 people) that holds the opposite viewpoint. The Religious Kibbutz Movement encompassing 23 kibbutzim across the country educates around meaningful institutional service for women, meaning military service. They oppose the National Service alternative.

Rabbi Ohad Taharlev, the head of the Lindenbaum Seminary, is one of the prominent activists encouraging the recruitment of religious women. “I don’t think there are sweeping educational, religious or ideological problems regarding girls serving in the IDF,” he told Al-Monitor. “I am definitely opposed to recruiting girls to combat positions, but I enthusiastically support the recruitment of girls to the Intelligence, Education and Air Force corps. It is not true that there are unique modesty problems in those places. The army is like the labor market. Feminine assertiveness does not scare me. If women today can be CEOs, there is no reason that they cannot assume important positions in the army too.”

In contrast, Bareli said that the vast majority of rabbis opposes the drafting of women. “We don’t change our positions to conform to changing trends regarding gender,” he explained. “We base ourselves on Jewish law and the spirit of Jewish law. This group encouraging army service is a small group, found at the very fringes of the margins of the national-religious sector. This group tries to portray us, the majority, as outdated. True, there is now a rise in enlistment rates [of religious women], but we are looking at the movement of a pendulum. Today’s data is identical to what existed 15 years ago, and soon the numbers will probably go down.”

Taharlev is irritated by being called “marginal.” “We are not a marginal group,” he said emphatically. “There has been a jump in the number of [religious] girls enlisting in the army. Today, the proportion is 30 to 40%. … If that is marginal, where, then, is the center?” According to Taharlev, these women “come from the strongest national-religious educational institutions." He said, "I think that the opposing rabbis are making a very big mistake. They don’t understand that the change is already here. They are trying to rein in changes that are already happening on the ground, instead of providing solutions. In contrast, we understand the spirit of the era and offer help while going with the flow instead of trying to stop it.”

Both sides agree that this controversy represents a much bigger war over the image of the national-religious stream: a dispute between the ultra-Orthodox Zionists and the modern Orthodox groups. In the middle is the silent majority, pulled by both sides.

“We are talking about a group that has been trying for years to change the very character of the national-religious public,” Bareli said candidly. “They are also fighting the Chief Rabbinate and other ‘old conventions.’” Taharlev also admits that the struggle is broader than the issue of religious women in the army: It is over the hearts and minds of the religious mainstream. “This struggle has very interesting ramifications because it examines which group has the stronger influence over the national-religious public: us or the ultra-Orthodox Zionists. The data in our hands shows that our influence is widening all the time,” he concluded.