The trouble with Israel's deputy minister 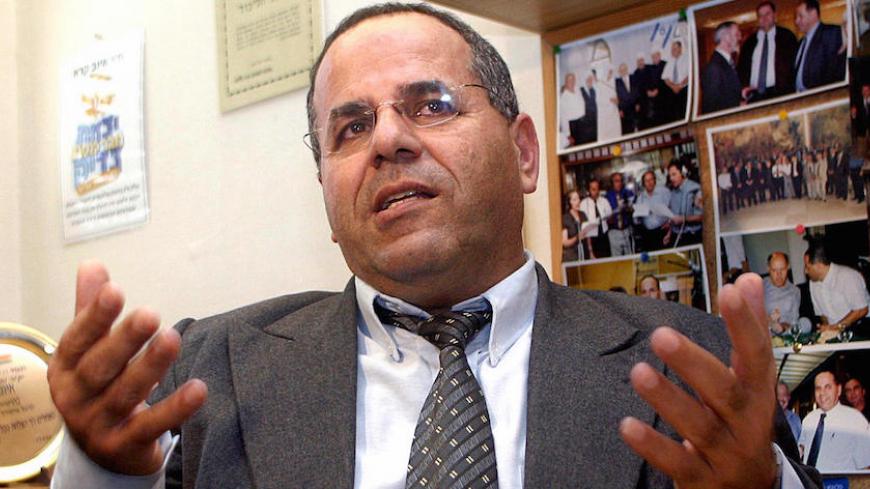 Regional Development Deputy Minister Ayoob Kara of the Likud Party seems to be seeking the media's attention. There is no other way to explain the series of embarrassing actions he has recently committed. The current affair in which he is involved goes beyond simply raising eyebrows or new jokes on social networks about his “endeavors.” Rather, this time it concerns a security-related leak with potentially dire repercussions for Israel. On Nov. 14, Kara revealed details on Facebook of a security-related affair currently under a gag order. According to the Israeli Military Censor, the details may endanger lives.

Kara removed the Facebook post after the criticism leveled at him by Israeli security sources. The damage, however, had evidently been done. According to what is currently known, the deputy minister had acted as a mediator in the affair under gag order, but apparently couldn’t keep from boasting about his involvement in the case even though the operation remained ongoing.

No less embarrassing were Kara’s attempts to justify his actions. In an interview with Israeli Army Radio, Kara asserted that he is under fire because he is not Jewish — he is Druze — and claimed that the operation is of a civil, not security-related, nature. Kara’s spokesperson, Yaron Olami, even went so far as to claim that sources involved in the affair had actually begged the deputy minister to reveal the details.

Security agents who had been involved in operations to bring Jews from Islamic countries to Israel unleashed scathing criticism of Kara. “Every time the deputy minister from the Likud gets involved in an operation like this, we all want to tear our hair out because he burns our bridges and ‘contaminates’ our sources,” one of the security agents told Eran Singer, a correspondent for Israeli public radio, Kol Israel.

As noted, this recent incident is not the only one in which the deputy minister has caused senior members of Israel’s foreign and security systems to tear their hair out and hurriedly launch damage control. In another example from about a month ago, Kara caused an embarrassing diplomatic incident involving the Vatican and the Italian government.

On Oct. 27, during the course of a visit to Italy, Kara asserted with a straight face that an earthquake that hit Italy had been caused by the passage of a UNESCO resolution that ignored the connection between the Jewish people and Jerusalem. Israeli Foreign Ministry spokesman Emanuel Nachshon hurried to issue a sweeping apology. Not only did Nachshon move to avoid a diplomatic faux pas, he also sought to salvage the visit planned by Italian President Sergio Mattarella to Jerusalem the day after the infuriating statement by the Israeli deputy minister.

There's more. After the Nov. 8 election of Donald Trump as US president, Kara boasted on Facebook that not only Prime Minister Benjamin Netanyahu, but he as well had been privileged to visit the president-elect's headquarters in Washington. Kara also posted a picture of himself on Capitol Hill to demonstrate his ostensible worldwide connections.

Kara, from the large Druze village of Daliyat al-Carmel, was appointed deputy minister of a useless ministry under Netanyahu’s government. The Regional Cooperation Ministry had been established in 1999 by Ehud Barak’s government and was headed at the time by Shimon Peres. The objective was to promote cooperative projects with the Palestinian Authority and countries in the region.

Under the current political situation of diplomatic stalemate, however, there are almost no projects to justify an entire ministry. Thus, the future of the Regional Cooperation Ministry has been the subject of debate for the past few years. In fact, during discussions about the Arrangements Law for the 2015 budget year, the Finance Ministry recommended its closing. It was noted that the ministry was not realizing its budget.

After the 2015 elections, Kara demanded a senior position in Netanyahu’s new government. Kara argued that he was a “victim of racial discrimination” and that if he wasn't appointed minister, “Netanyahu will be subject to [unwelcome] surprises.” To avoid any “surprises,” Netanyahu appointed Kara deputy minister of a ministry slated for closure. Ever since, it seems the deputy minister has been working overtime to justify his position. For example, Kara “adopted” the families of Israeli civilians whose sons are being held by Hamas in Gaza, in particular the family of Avera (Avraham) Mengistu.

Kara visited the Mengistu family after it was made public that Avera had crossed the border into Gaza. He promised the family that he would work on its behalf through various channels to obtain Avera’s release. Of course, nothing is wrong with people trying to help in cases such as these. All assistance is welcome. One gets the impression, however, that Kara’s actions have not been geared solely toward Mengistu’s welfare.

Al-Monitor has learned that a few months ago, a well-known journalist from one of Israel’s large newspapers who knew about Kara’s connections to the Mengistu family turned to him for assistance. She asked him to help her make contact with the family for a possible interview. Kara proposed that she join him in a surprise visit to the family's home, along with a photographer, without giving the family advance notice about bringing along a journalist. In other words, he wanted to sneak her into the house, plus he had a stipulation: that his picture with the Mengistu family be prominently displayed in the paper. The journalist rejected his demand, noting that his request had crossed the lines of good taste.

A close friend of the Mengistu family involved in efforts to obtain Avera’s release by Hamas spoke to Al-Monitor about Kara. Speaking on condition of anonymity, he said that although Kara’s actions did not inflict any harm on Israel — because there have not yet been any negotiations — “It is a shame that the deputy minister is misleading the family and causing them disappointment, over and over.”

Olami, Kara's spokesperson, said to Al-Monitor, “This incident never happened. It never took place. Mr. Kara is not responsible for the Mengistu family’s PR. Whatever he did for the Mengistu family, be it in the media or at the Knesset, was done at the request of the family and for the sole purpose of bringing their son back home. The deputy minister is very careful not to publish sensitive information ahead of time. This was the case of the operation to bring back Jews still living in Yemen [another affair, revealed in March 2016] — one can check who published this first. In general, all of Mr. Kara’s activities for the State of Israel and for the Jewish people are conducted with the utmost precaution and sense of responsibility. The current allegations are more than troubling, and seemingly motivated by foreign interests.’’