Many Iraqi officials and citizens have welcomed Donald Trump's presidential victory due to his stances against terrorism and in favor of a secure region. 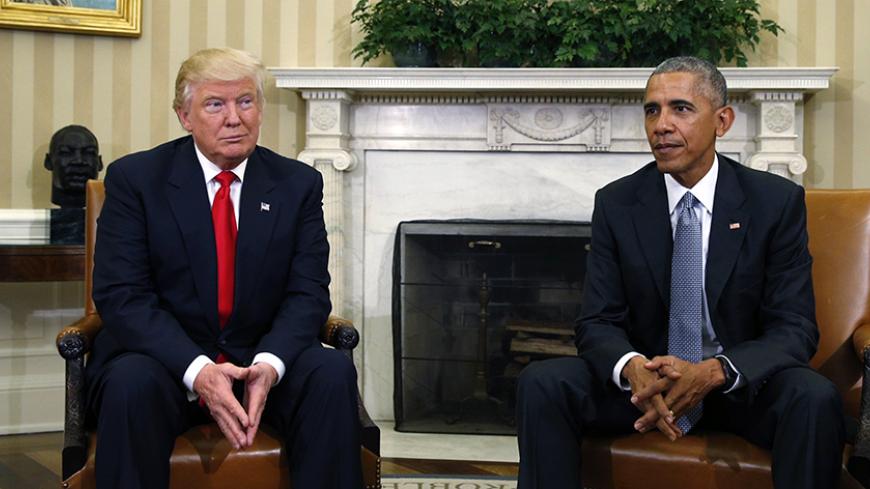 NAJAF, Iraq — Iraqis paid close attention to the US presidential race, especially to the candidates' positions on their country. Many Iraqis welcomed Donald Trump's presidential victory, as well as his anti-terrorism and anti-chaos rhetoric on Iraq.

Once the announcement came that Trump had won, many Iraqi politicians and citizens expressed joy. Prime Minister Haider al-Abadi congratulated the new US president for his victory, and said that he looks forward to further cooperation between the two countries in all fields, particularly on security issues and the fight against terrorist groups in Iraq.

Iraqi President Fuad Masum and parliament Speaker Salim al-Jabouri also sent Trump congratulatory messages. Jabouri anticipated a Trump presidency to "bring gains for the Middle East and Iraq, particularly in the fight against terrorism and elimination of the Islamic State [IS] organization, in a way that brings about security and stability to the region and the world."

The government-funded Iraqi Media Network welcomed the Trump victory in an article that mentioned previous speeches of Trump, in which he said that he would defeat IS and that nobody would be tougher on IS than him, and so on. The author perceived Trump's Middle East policy to be closer to Iraq, as well as a deterrent to religious extremism in the region and the tide of Saudi Wahhabism.

Muwaffaq al-Rubaie, a leader and parliamentarian for the National Alliance and former national security adviser under the presence of US troops in Iraq, said Nov. 9 that Donald Trump's victory "is a good sign for the Middle East in general, and Iraq in particular." He argued, "Obama withdrew US troops from Iraq in late 2011 without guarantees, which caused the return of terrorism to Iraq. Thus, Trump's victory would be a good thing for Iraq." He said that, in general, "Republicans are better than Democrats for Iraq, because everything that has happened to Iraq occurred under the Democrats' era."

Former Iraqi ambassador to the United States, Lukman Faily, previously told Al-Monitor, "The superficiality of the US-Iraqi relationship [under the Obama administration] is one of the reasons [IS] was allowed to run rampant for as long as it did." Faily criticized the United States for being reckless about decisive actions to repel terrorists and failing to prevent them from committing major humanitarian crimes in the past two years. Faily said that Iraqi officials, including former Foreign Minister Hoshyar Zebari and former Prime Minister Nouri al-Maliki, visited the United States in 2013 asking for assistance to hit IS camps in the Iraqi desert, back when IS was preparing to expand their control in Iraq and Syria. Yet the United States did not take these warnings seriously and did not provide any support for Iraq during that critical time.

Also, the complete withdrawal of US forces from Iraq in 2011 occurred under Obama, causing a security vacuum in the country and allowing terrorist groups to restructure their ranks in a stronger and fiercer organization. Al-Monitor learned from one of Maliki's close advisers, who declined to be named, that "Maliki insisted that a number of US troops remain to ensure security, but Obama had strongly rejected it."

During his campaign, Trump criticized the withdrawal from Iraq, where the United States was in control of the situation, particularly in Mosul. Yet it lost Iraq after the withdrawal of its troops in 2011 in exchange for nothing. In Trump's opinion, the United States should have kept its troops in place to prevent the emergence of IS and prevent Iran from controlling Iraq.

Even after the fall of Mosul in June 2014, when IS descended on central and southern Iraq, the Obama administration's assistance was not serious and sufficient enough to repel the IS onslaught and prevent disasters and genocides from taking place — similar to what happened to the Yazidis in Sinjar and to Christian and Shiite minorities in Ninevah and other provinces.

Also, the Obama administration is criticized for neglecting Iraq when a modern democracy was being built. This neglect led to the collapse of the political partnership between Iraqi components during the reign of Maliki and caused IS' tragic rise.

With such impressions about Obama, Iraqis greatly welcomed Trump saying during the election campaign, "We are going to convey my top generals and give them a simple instruction. … They will have 30 days to submit to the Oval Office a plan for soundly and quickly defeating [IS]. We have no choice." Some American nationals of Iraqi origin, such as Nahren Anweya, supported Trump and ran a campaign for him in the media and social networks during the presidential race.

In fact, Trump's policies toward Iraq are still close to mere election slogans, far from understanding core problems and offering clear solutions. It is still unknown whether Trump would be supportive of a unified Iraq or carry on with the country's partition. How will he deal with Iranian influence in Iraq and deter Turkish and Saudi ambitions in Iraq? Time has all the answers.