With the liberation of Mosul in sight, the Trump administration is internally divided on what formula might bring long-term stability. 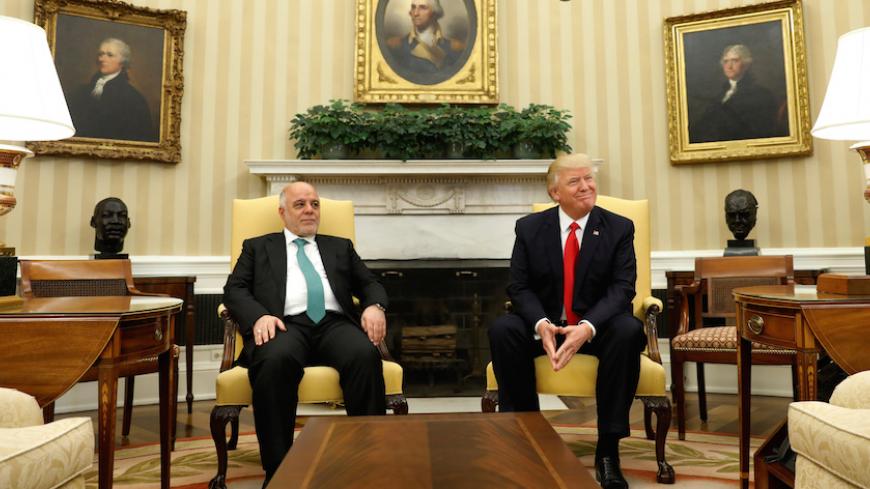 WASHINGTON — As Iraqi Prime Minister Haider al-Abadi visits Washington and Secretary of State Rex Tillerson hosts some 68 counterparts for a counter-Islamic State (IS) summit in Washington on March 22-23, a debate has emerged within the Trump administration about how invested it plans to be after the liberation of Mosul from IS, and how hard it should push on Iran to give space so Iraq can try to reintegrate its alienated Sunni population.

At issue is how to ensure that Sunni communities and territory liberated from IS do not become fertile ground once again for Sunni extremists, as they did in 2012-2014, after the withdrawal of US forces from Iraq and after increasingly sectarian policies pursued by the Shiite-led Nouri al-Maliki government in Baghdad alienated Iraqi Sunni communities.

The debate within the Trump administration hinges on how involved the United States should be on the ground after the liberation of Mosul to ensure Iraq is able to sufficiently succeed as a state and reintegrate its Sunni communities, and how much Iranian influence needs to be pushed back to prevent Iraq’s failure as a state, said Nicholas Heras, a Middle East expert at the Center for a New American Security.

“Fundamentally, the debate centers on the question, ‘To what extent should the US be engaged inside of Iraq in order to stabilize areas of the country that … will soon be conquered from [IS], and in which [there is] very little local support for the [Shiite-dominated Popular Mobilization Units] or really the Baghdad government?’” Heras told Al-Monitor on March 21.

“The crux of the debate is between those in the military and in the NSC [National Security Council] who believe that the Obama administration lost Iraq, that by not pushing harder for there to be a sort of enduring US presence to help the Iraqi security forces maintain security and progressively combat al-Qaeda — what became [IS] — that in fact the Obama folks lost Iraq,” Heras said. “And the counter argument to that is, since the initial invasion of Iraq in 2003 and dismantling of the Saddam Hussein government … the Iranians, due to geography and … extensive social, political and economic connections … that it was natural it would develop enormous influence over Iraqi politics.”

“The question moving forward is how much does the Trump administration want to invest in the future of Iraq, after campaigning quite extensively on the theme that both Democrats and Republicans had supported a failed policy of nation building half a world away, that didn’t support the American people,” Heras said.

With the prospect that IS may largely be defeated as a quasi-caliphate in Iraq and Syria within a matter of months, “what comes after is extraordinarily important, and Iraq is at the very center of it,” former US Ambassador to Iraq James Jeffrey said March 20.

Some 20 million Sunni Arabs living between Baghdad and Damascus will still be there, and the United States needs to help get the regional political and security dynamics right so they can be integrated into states that can succeed. But it needs to do so with a light footprint and not with another 2007-type “surge,” he argued.

“The larger question of how do you integrate these Sunni Arabs into their states is not something that we [the United States] can do on the ground,” Jeffrey said.

“It is something that we have to do … by coming up with the security and political solution for the region,” Jeffrey said on a call for journalists hosted by the Washington Institute for Near East Policy, where he is a senior fellow. “And that means convincing the Iranians that it is in their interests to allow governments in Baghdad and Damascus to reconcile with the Sunni Arabs.”

“You have to get the basic political, diplomatic, security dynamics of the region under control before you can have a solution to integrate these people,” Jeffrey said. “And I am not so sure the US government is there.”

There is “a division right now in the Trump administration” about how to proceed, Jeffrey said

“On the one hand, you have people who want to take a very aggressive position against Iran,” Jeffrey said. “I have great doubts about that, I don’t think they will have the stomach for it, because Iran will retaliate, but we will see.

“But then you have others, particularly among the former military people and military people who are essentially caught in a time warp of about 2007,” Jeffrey said. “And that is … ‘Yeah, we got to get PRTs [provincial reconstruction teams] in there, we have to look into winning hearts and minds, we have to do police training.’”

Jeffrey said, “This is a different situation. We were never very good in coming up with … the bottom up … solutions to these problems of governance and security and state loyalty and unity.”

Abadi was positive about his meetings with Trump and other officials at the White House on March 20 and the Trump administration’s support for Iraq’s fight against IS. But while diplomatic, Abadi also made clear he did not support an expanded US troop presence in Iraq.

“But of course we have to be careful here,” Abadi continued. “We are not talking about military confrontation as such. Committing troops is one thing, while fighting terrorism is another thing. I don’t think now public opinion, especially in the US and other places, would encourage sending troops in large numbers.”

“So I think terrorism, you don’t defeat by military force only,” Abadi said. “There are better ways for defeating terrorism, and I think we can do it.”

The Iraqi prime minister also obliquely warned against the temptation by some in Washington to slow the process of defeating IS, possibly under the concern that Iran might benefit.

“There may be some tendency to derail our confrontation with [IS] and getting busy with some other conflicts,” Abadi said. “I would guard against that.”

Iraq has a plan for stabilizing Mosul, he said.

Abadi said Iraq wants to stay out of the sectarian tensions inflaming the region, and Iraq would like to have good relations with all its neighbors. He also said he welcomed the recent visit by Saudi Foreign Minister Adel al-Jubeir to Baghdad — the first senior Saudi official to visit Iraq since 1990, he said — and hoped to advance the opening to normalize Iraqi-Saudi relations.

“Our Saudi friends, probably they used to think that Iraq was under the control of our Iranian neighbors,” Abadi said. “But we are not. Iraq is governed by Iraqis, and they [saw] for themselves.

“We called on Saudis to cooperate with Iraq and work with Iraq like neighbors,” he said. “They showed that they are interested in helping in providing reconstruction for the areas liberated from [IS]. And this is welcome for us. We want to normalize relations.”

“It’s tough,” Abadi said. “We are bordering Turkey, bordering Iran, bordering Saudi Arabia, bordering Jordan, Kuwait, Syria, of course. And we are here. We have to live with our neighbors.”