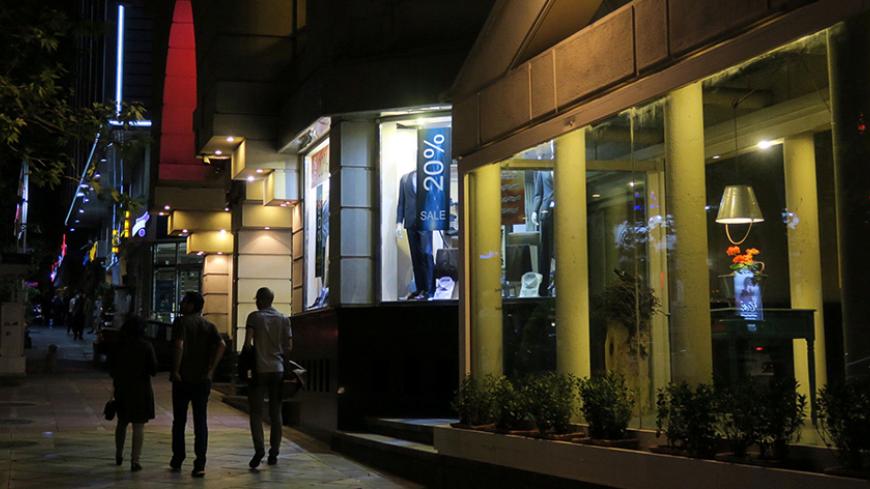 People walk past shops in an upmarket suburb in northern Tehran, Iran, May 3, 2016. - REUTERS/Marius Bosch

TEHRAN, Iran — Privatization in Iran only effectively started in 2001. Five years later, in 2006, Supreme Leader Ayatollah Ali Khamenei backed a constitutional amendment — the Law on Implementation of General Policies of Article 44 of the Constitution — to ease the sale of state-owned enterprises in an attempt to downsize government and help expand the private sector. But this grand scheme has never hit its intended target, and genuine privatization has thus far remained slow.

Indeed, based on figures published by the Iranian Privatization Organization (IPO), total proceeds from privatization in the last 16 years were just over $108 billion, largely facilitated via local exchange markets (more than 61%).

Although the current Iranian year (ending March 20, 2017) is thought to be the final year of the Privatization law enacted in 2006, IPO Managing Director Jaafar Sobhani was quoted as saying by Hamshahri daily Nov. 1, “It might be extended for another year should parliament approve of it.” Indeed, given that there are still over 200 companies on the IPO’s to-do list, many economic experts view the current privatization schedule as far-fetched and impractical. Furthermore, implementing the 2006 law in itself has proved to be extremely challenging, largely due to the lack of ease of doing business and complicated bureaucracy favoring state-owned companies.

For instance, vested interests within the government — according to Minister of Economic Affairs and Finance Ali Tayebnia — are prepared to block any major effort to divest public firms to the private sector. Hamshahri reported that Tayebnia apparently was tacitly referring to the minister of mining, industry and trade and the oil minister in an address to the 57th annual meeting of the Public Private Dialogue Council on March 7.

Moreover, when the government has pushed for privatization, it has greatly been a cash-raising enterprise. Indeed, paying off debts has been a major driver of the transfer and sale of a great number of enterprises to so-called quasi-state entities — and principally pension funds — as noted by Tayebnia in an Oct. 7 interview with Al-Monitor. This type of sale occurred on a large scale during the administration of President Mahmoud Ahmadinejad (2005-13). Coupled with the disbursement of “justice shares” — a scheme pursued by Ahmadinejad to bestow shares to low-income groups in a bid to improve income distribution — the value of these ownership transfers amounted to more than 300 trillion rials ($9.47 billion).

Mohammad Reza Pourebrahimi, a member of parliament and member of the parliamentary Economic Commission, in a June 25 interview with Nama News, questioned the very nature of such share divestments. Addressing the failure of privatization in Iran compared with developed countries, he noted, “The outcome is worse than the time before the share transfers.” Commenting on figures on privatizations conducted by the IPO, Pourebrahimi said 25% of such entities were divested to the Civil Servants Retirement Organization, 15% to the Farmers, Villagers and Nomads’ Social Insurance Fund and 25% to the Social Security Organization. What is of particular note in the view of Pourebrahimi is that the managers of these funds are appointed by the minister of cooperatives, labor and social welfare. This is fundamentally at odds with one key aspect of privatization in itself.

According to the IPO, merely a small fraction of state-owned enterprises, estimated at about 5%, have actually been divested to what would be regarded as the real private sector, as opposed to quasi-state entities and the like. This has meant that factors such as “promoting quality, raising productivity and increasing efficiency were untapped,” said Hossein Abdo Tabrizi, an adviser to the minister of roads and urban development, at a roundtable held by AyandeNegar, a publication affiliated with the Tehran Chamber of Commerce. The comments appeared in the monthly’s July 22-Aug. 21 edition. “A major transfer of ownership of public companies happened under the previous administration [of Ahmadinejad] but all in an unfavorable way,” he said. “The distributional impact of privatization was what the then-government was vying for and now I am certain that the intended target was never hit."

A further factor frequently cited as an explanation for the meager size of the Iranian private sector is the lack of ease of doing business in the country, as shown by international rankings, according to data compiled by the World Bank this year. This is testimony to the low amount of foreign direct investment (FDI) as an alternative to capital scarcity in the economy in the course of the past 15 or more years of privatization policies.

It is clear that FDI has never played a constructive role in capital injection in the privatization process, which has long been suffering from low investment. Abdo Tabrizi, ”From the actual start of the privatization scheme to date, income per capita has declined continuously and the middle class in Iran has been the victim constantly being wiped out of the face of the economy,” Abdo Tabrizi said in AyandeNegar. “This has touched a degree that the labor force participation rate has reached the worrying rate of 36%,” he stressed. The rate is the proportion of people eligible to participate in the labor force who are actually participating in it, by working or looking for work. It is usually expressed as a percentage of the total labor force-eligible population in an economy.

On a broader, structural level, the private sector only makes up roughly one-fifth of the economy. Meanwhile, 80% of fiscal spending is allocated to state-owned enterprises. Under such circumstances, it appears that hopes for further transparency and openness to induce genuine privatization in the country will likely remain unfulfilled.