The ongoing Press Exhibition in Iran has provided a platform for debate on freedom of the press in the country, highlighting the divisions among political factions. 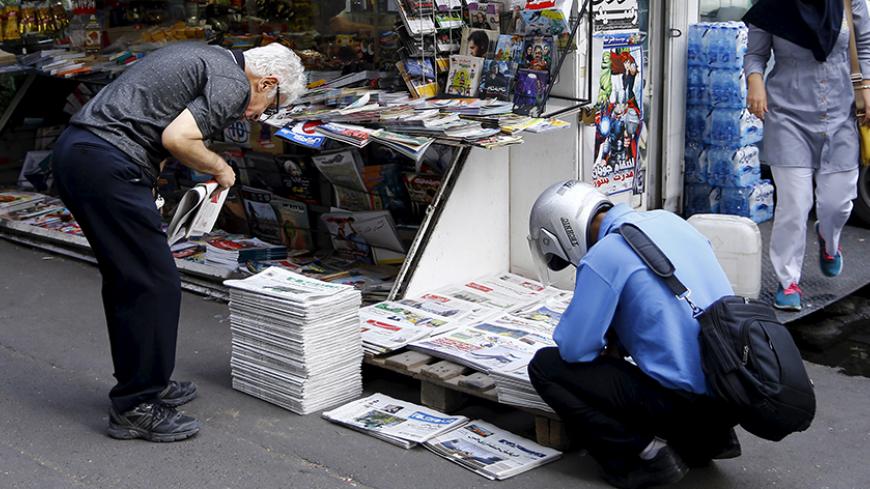 Men look at newspapers at a stall along a street in central Tehran, Iran, Aug. 24, 2015. - REUTERS/Darren Staples

Judiciary chief Ayatollah Sadegh Larijani’s latest remarks on freedom of the press in Iran featured on almost every front page in the country Nov. 8, and heated the debate that emerged with the opening of the Press Exhibition in Tehran on Nov. 4.

“Some pressure us by asking, 'Why don’t you shut down that newspaper?' while others ask, 'Why have you banned that newspaper?'” Larijani said Nov. 7. “All I can say [in response] to these pressures is that we [the judiciary] pursue our path only by following the constitution and Islamic law.”

In response to President Hassan Rouhani’s speech at the opening ceremony of the 22nd Press and News Agencies Exhibition on Nov. 4, Larijani accused him of harboring double standards on freedom of the press.

“On several occasions you complained about why we didn’t have [a judicial] approach to this newspaper or that website,” Larijani stated without directly naming Rouhani. “But when you speak among journalists, you hail freedom of the press.” In this vein, Rouhani’s comments on freedom of the press, according to Larijani, are tantamount to “defamation of the judiciary” and an “insult.”

Since taking office in August 2013, Rouhani has openly criticized the shutting down of newspapers and the pressure that has been applied on the media. Speaking at the Press Exhibition on Nov. 4, he said, “How can journalists provide security to society if they are worried about their own security?” Rouhani also suggested that violations of the press law be investigated by professional journalists, and not in court. He added, “We should not break pens and shut mouths with flimsy excuses.”

In another related comment Nov. 8, government spokesman Mohammad-Bagher Nobakht stressed that “the government believes in freedom of speech and freedom of criticism,” which have been underlined in the Iranian Constitution. He added, “However, the government voices its objection to those who receive protection and act against the law, accuse [the administration] and revile it.”

Meanwhile, Justice Minister Mostafa Pourmohammadi also entered the debate. Visiting the Press Exhibition on Nov. 8, he weighed into the discourse over the role and status of journalism in the country. “No one can say that we don’t have freedom of speech in this country,” Pourmohammadi said. “No news remains unpublished and there is no one with untold thoughts. But we need to put everything in order.”

According to Pourmohammadi, the recent contradictory remarks on freedom of the press in Iran are a sign of freedom and will bear fruit “if everyone follows the law.”

Amid the heated discussion over freedom of press in Iran, the semi-official Fars news agency has published a series of short interviews with right-wing politicians on the topic.

In a Nov. 8 interview with Fars, Ahmad Salek, the head of the parliamentary cultural commission, echoed the judiciary chief’s remarks, saying, “On the one hand the government defends freedom of speech and freedom of the press, but on the other hand it accuses its critics of being illiterate and quasi-revolutionary.”

Salek also suggested that politicians avoid fanning political polarization in the country, saying, “A private meeting is the place where the president should resolve these disagreements.”