Israeli Prime Minister Benjamin Netanyahu moved beyond his traditional enemies of Iran and Palestine and has designated the Israeli media as his new nemesis. 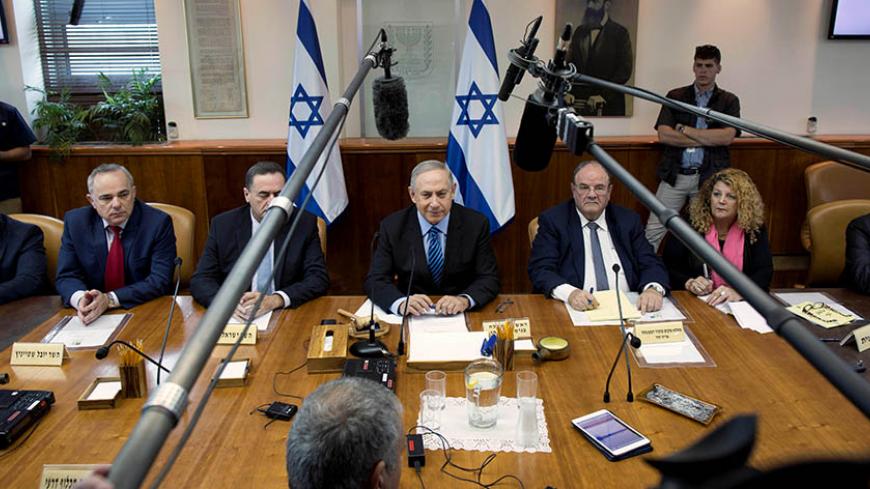 The July 2015 signing of the nuclear agreement between Iran and six world powers deprived Prime Minister Benjamin Netanyahu of his main electoral growth engine. Netanyahu milked the anti-Iran issue for all it was worth from one election campaign to the next over the past seven years, interspersed with impressive speeches at the UN General Assembly, the US Congress and other venues. He stormed toward the emerging agreement with guns blazing, and he continued to bash it even after it was inked. But what’s done is done. Iran, according to various reports, is adhering strictly to the terms of the agreement and the “Iranian threat” is no more — at least for the coming decade.

But that’s not all. The Palestinian issue, which has engaged Israelis for decades, is also no longer of any interest to them. The peace process has died out. The concept that Israel has no partner on the Palestinian side has taken root deep in the public consensus, leaving nothing to use as a threat with which to scare voters. Add to this the facts that the war in Syria has removed Hezbollah from the map of immediate threats to Israel’s national security and that following the general dissolution of the Arab world surrounding Israel, Israel’s security situation is at its best ever — and you have an Israeli prime minister in trouble. Netanyahu, who has built his career on doomsday prophecies, apocalyptic scenarios and the creation of external demons to close ranks around him, has found himself without a target. The political support growth engines have died out.

Now it can be officially declared: Iran has been replaced by the Israeli media. Netanyahu has made a strategic decision to turn the media into a new ax with which to grind his way to the next election victory.

It is not only his multipronged and continued effort to overpower the remaining free media outlets in Israel. He has recently made a decision to launch personal, aggressive broadsides against journalists. He issues long reactions to every investigative report aired about him and every piece written about his conduct, usually ignoring the facts or questions that have arisen and focusing instead on the journalists responsible for the reports. Netanyahu, who is addicted to the in-depth surveys he commissions with great frequency, identified the low esteem in which Israelis, especially his constituents, hold much of the media. Now, all that’s left for him to do is to fan the flames of hate.

Nov. 7 marked a defining and unprecedented moment in this trend, when Ilana Dayan, a respected journalist and long-time presenter of the Channel 2 television magazine program “Uvda” (Hebrew for “fact”), stood in front of the cameras for almost six long minutes and read Netanyahu’s reaction to the investigative report she had just aired.

The entire reaction, several hundred words and four pages in length, dealt with Dayan herself. Netanyahu did not respond to a single question that came up in the investigation and completely ignored the findings, facts, documents and testimonies that were presented. He only focused on Dayan, one of Israel’s most prominent and important journalists of the past 25 years. He made her out to be a radical leftist, citing excerpts, quotes and carefully compiled data about her activities in recent decades, doing all in his power to violate her very right to criticize him.

It was a defining moment in Israeli television history that stirred up a raging storm. The reaction was even defined by an associate of Netanyahu (speaking on the condition of anonymity) as “unproportioned.” Dayan’s editorial team submitted to the office of the prime minister, about a week before the program was broadcast, a series of 32 questions. And it was Netanyahu himself who decided not to respond concretely, but to attack Dayan frontally. The idea was to de-legitimize her personally. Ran Baratz, Netanyahu’s newly appointed aggressive communication adviser prepared the response. His staff members worked for several days scrutinizing Dayan’s prior statements and “building up a file” against her — a file that will brand her as radical left.

The thing is, the original investigative report was actually milder than the questions submitted to the prime minister’s office. But as far as Netanyahu’s staff was concerned, it was already too late. Netanyahu is increasingly influenced by his older son, Yair, who is an extreme right-winger and advocates an aggressive approach. For him, attack is the only possible defense. And so, with Yair Netanyahu, Sara Netanyahu and Ran Baratz, Netanyahu’s inner circle pushed the prime minister to attack Dayan head-on.

Looking backward, they understood that this reaction was overkill, which could actually damage Netanyahu’s status even within the right-wing camp. Still, this was the line taken, and the Likud made it clear that these are the new rules of the game. Any journalist who hurts Netanyahu will be hurt back.

The blatant attack on Dayan follows an unusually powerful reaction more than a week ago to an investigative report that ran in Haaretz about Netanyahu’s media takeover. Sources close to the prime minister (cited in Haaretz) barely referred to the arguments made in the piece, but claimed in their response that “We can only hope that the fact that the German media concern Dumont Schauberg, which engaged in disseminating Nazi propaganda during World War II and bought 20% of the shares in Haaretz, has nothing to do with this spirit.” An Israeli prime minister is accusing (through his associates) an Israeli newspaper of links to Nazis and Nazi propaganda. Other journalists who publish negative details or stories about Netanyahu have been similarly disparaged. All are accused of membership in the “radical left” and of obsessive personal persecution of the Netanyahu family. Factual responses are no longer de rigueur. Everything is personal.

All of this compounds Netanyahu’s ongoing efforts in recent years, as described by Al-Monitor in previous articles, to weaken the Israeli media or to carry out a gradual hostile takeover of its outlets.

Netanyahu’s close associate, American billionaire Sheldon Adelson (owner of Israeli freebie Israel Today), is currently looking into the feasibility of buying Globes, an influential Israeli financial daily going through hard times due to its owner’s bankruptcy. The attack against the public broadcasting corporation, which is slated to replace the Israel Broadcasting Authority, and the attempt to shut it down before it has even gone on the air continues. Next year, the powerful Channel 2 television network will be divided into two separate channels, losing its key branding (the digits 22 on the remote control). Top media personalities in Israel are asking themselves where all this is going and when the prime minister will calm down, and mostly, which of them is next in line.