Congress votes to box Trump in on Syria sanctions 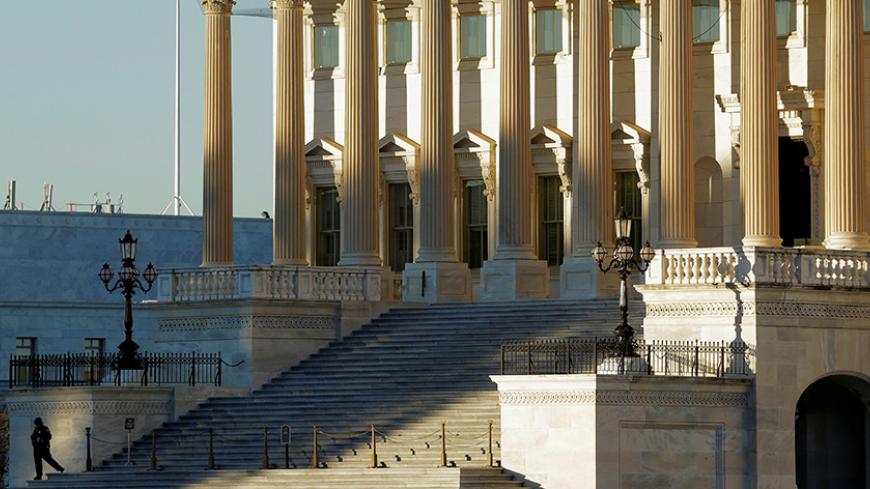 A security guard stands on the steps to the House of Representatives at the US Capitol, Washington, Nov. 7, 2016. - REUTERS/Joshua Roberts

The US House on Nov. 15 easily passed tough new Syria sanctions that would box in both President Barack Obama and his successor, Donald Trump.

The voice vote comes despite discreet pressure from the Obama administration to make it easier for the president to waive the sanctions. A Democratic congressional aide told Al-Monitor that bill writers declined to do so, in part because of concerns that Trump might use that authority to avoid enforcing the law.

"I am sensitive to the fact that there have to be some waivers, because presidents have to have a certain kind of authority," bill sponsor Eliot Engel, D-N.Y., told Al-Monitor. "But I am unhappy with waivers all the time that you can drive a Mack truck through. I think at some point Congress has to say what it feels and, as a co-equal branch of government, have as much of a say as the executive."

One Republican aide told Al-Monitor that Democrats actually signed off on the bill's waiver language before the election, when Hillary Clinton was the runaway favorite to win. And, indeed, Engel has long been pushing for tougher penalties on Syrian President Bashar al-Assad, with his bill first clearing the House Foreign Affairs Committee in July.

Still, Trump's victory has caused concern on both sides of the aisle that the president-elect may be even more reluctant than Obama to turn the screws on Assad and his Russian supporters.

"I’ve had an opposite view of many people regarding Syria," Trump told The Wall Street Journal after his election. "My attitude was you’re fighting Syria, Syria is fighting [the Islamic State (IS)], and you have to get rid of [IS]. … Now we’re backing rebels against Syria, and we have no idea who these people are.”

Assad for his part called Trump a "natural ally" Nov. 15.

"If he is going to fight the terrorists, of course we are going to be [an] ally, natural ally in that regard with the Russian[s], with the Iranian[s], with many other countries," the Syrian president told Portugal's RTP state television.

Republican leaders in Congress responded with a clear message that they want to see more action against Assad, not less.

"Republicans and Democrats recognize the need to isolate the Assad regime for its continued atrocities against the Syrian people," House Speaker Paul Ryan, R-Wis., said in a statement ahead of the Nov. 15 vote. "I’m glad the White House has stopped blocking these critical sanctions, which are a necessary response to Assad’s crimes against humanity.”

The president-elect has also caused heartburn with his praise of Russian President Vladimir Putin throughout the election. After the two men spoke by phone Nov. 14, Russia renewed its air campaign in Syria.

"The Obama administration’s last attempt at resetting relations with Russia culminated in Putin’s invasion of Ukraine and military intervention in the Middle East," Senate Armed Services Committee Chairman John McCain, R-Ariz., said in a Nov. 15 statement, without ever mentioning Trump by name. "At the very least, the price of another ‘reset’ would be complicity in Putin and Assad’s butchery of the Syrian people. That is an unacceptable price for a great nation."

Engel's bill would impose financial and travel sanctions on foreign persons who knowingly provide support to the government of Syria or its military and intelligence services. He made it clear that Russia was a main potential target of the legislation.

"I am very concerned about the destructive role Russia is playing and has played in Syria," Engel said. "And I feel that they ought to be challenged, that we cannot simply let them get away with this."

Engel said he hoped House action would prompt the Senate to follow suit. To date, no one in the upper chamber has introduced companion legislation.

House Democrats stalled consideration of the bill in September when the White House urged them to give a newly minted cease-fire time to work. Since its failure, the administration has focused on getting broader waiver authority written into the bill, to no avail.

"The administration retains a wide range of authorities to sanction the Syrian government and we believe those authorities are best exercised in a targeted manner at a time of our choosing reflecting the situation we see on the ground," a State Department official told Al-Monitor in an email. "We also continue to examine the sanctions option in concert with our European partners and other likeminded countries.

"At this time, we are not seeking additional authorities from Congress, nor would we welcome the requirement to impose broad sanctions that could risk unintended consequences, including potentially for our own partners or allies and possibly for the humanitarian situation in Syria. As we have long said, sanctions are stronger when coordinated with our partners in Europe and beyond to achieve the maximum effect coupled with off ramps we can utilize should we achieve a change in behavior from the sanctioned party."

Many if not most sanctions bills contain a broad national security waiver that gives the president near unfettered ability to conduct foreign policy. Engel's bill by contrast only allows the president to waive sanctions if progress is being made on a political settlement or if certain conditions are being met, including: an end to barrel bombing and other air attacks on civilians; restoration of aid to besieged areas; release of political prisoners; and an end to attacks against medical facilities and other civilian targets by the Assad regime and its Russian and Iranian allies.

"I know all administrations, be they Republican or Democratic, would like the Congress not to get involved," Engel said. "But I feel strongly that we need to get involved."