Where does Turkey's Erdogan stand on US presidential race?

According to the Turkish president, former US Secretary of State Hillary Clinton lacks political experience. 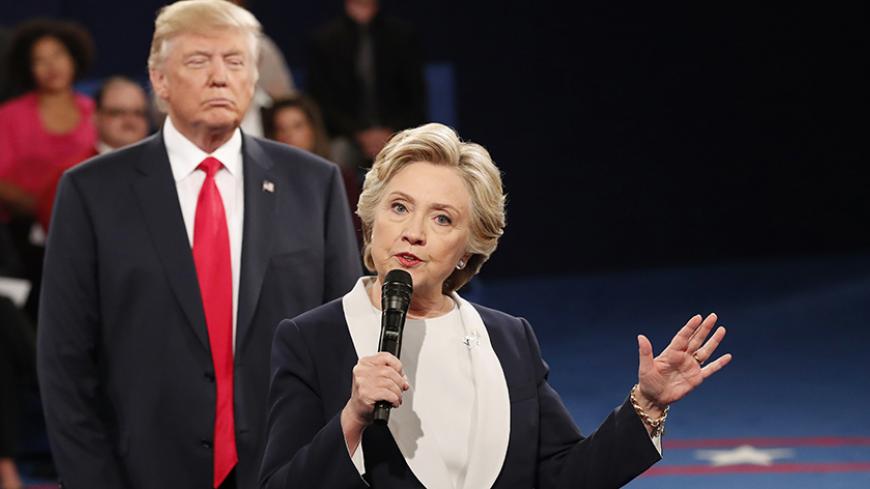 “I would not use American ground forces in Syria,” she said during the Oct. 9 presidential debate. “I think that would be a very serious mistake. I don’t think American troops should be holding territory, which is what they would have to do as an occupying force. I don’t think that is a smart strategy. I do think the use of special forces, which we're using, [and] the use of enablers and trainers … are very much in our interest.”

According to Israel’s Jerusalem Post, this mirrors the current US policy of working with the Syrian Kurdish People’s Protection Units in eastern Syria.

“Most importantly, she emphasized the central role of the Kurdish forces in the region: ‘I would consider arming the Kurds; they have been our best partners in Syria, as well as Iraq,’ she said,” the Israeli daily reported.

Clinton should have been aware that such a statement would seriously irritate some people, including Turkish President Recep Tayyip Erdogan, but she apparently felt it was essential to pave the way to take Raqqa, the Islamic State’s self-proclaimed capital in Syria.

As reported in Hurriyet Daily News, according to Erdogan, her statement demonstrates a lack of political experience. Erdogan called her “a political novice."

“This is a very unfortunate statement. I regard this as political inexperience,” Erdogan said.

Hurriyet continued, “Emphasizing that this region has different sensitivities and that supplying weapons to the Syrian Kurdish Democratic Union Party would be a very wrong move, he said: ‘Aren’t you aware that you caused the death of 600,000 people through the weapons you provided? Where is the Universal Declaration of Human Rights? Where is law? Where is the importance of human life?’"

But does Erdogan really think Clinton is a political novice? Is she really politically inexperienced?

Considering Clinton’s track record, perhaps not. After all, she is a former US secretary of state and she was first lady when Erdogan himself hadn't even been elected mayor of Istanbul. She was also a US senator representing New York.

It is true that Erdogan nowadays does not mince words with his counterparts. He yelled at Iraqi Prime Minister Haider al-Abadi when their differences on Mosul surfaced: “You are not my interlocutor, you are not at my level, your quality is not at my level,” he said.

By comparison, he was practically courteous in voicing his policy differences with the potential next US president.

It's more appropriate to think of Erdogan’s misgivings about Clinton as a harbinger of the acute policy differences that might be awaiting Turkey and the United States if she gets elected.

It is noteworthy that Erdogan, following his remarks on Clinton, used the harshest terms in raising the issue of Turkey's request for the extradition of Fethullah Gulen, the Pennsylvania-based Turkish cleric whom Erdogan blames for the coup attempt of July 15.

“When they ask for terrorists from us, we hand them over. But look, they do not hand over such terrorists to us. Why not? They talk about the judiciary and say they cannot hand him back without a court decision. OK. Let’s see what happens. The same thing could happen here. When [the United States] wants someone from us, we will send them to [Turkish judges]. We will not decide until [Turkish judges] decide. That’s how it will be from now on,” he said this week.

“Look, it’s been 17 years and [Gulen] still lives there. We have sent [the United States] 85 boxes of documents and we are still sending them,” he added.

A Western diplomat privy to information about those documents told me the United States did not find strong evidence to substantiate Turkish claims that Gulen was personally involved in the botched coup.

The chance of seeing Gulen extradited might become even more unlikely if Clinton is elected. Erdogan believes Gulen followers were involved in supporting Clinton. USA Today brought up the same issue only a month after the attempted coup.

“An Istanbul-based college professor, who has been accused by the Turkish government of coordinating last month's failed coup attempt, is at the center of a group of suspicious 2014 contributions to a super PAC supporting Democratic nominee Hillary Clinton, a USA Today analysis shows,” the daily reported.

“Adil Oksuz is the subject of a massive manhunt in Turkey. Two years ago, an apparently fictitious company that Oksuz created made a $5,000 donation to the Ready for Hillary PAC, a group preparing for Clinton's presidential campaign. The Clinton campaign did not provide a response to USA Today's questions about the donations. The campaign did not control the operations of the super PAC. A company called Harmony Enterprises gave $5,000 to the PAC on June 27, 2014.”

The article continued, “That same day in 2014, two leaders of the Gulen-affiliated Turkish Cultural Center of New York made large donations to Ready PAC. Recep Ozkan, who served as the center's president a decade ago, donated $20,000 to Ready PAC. He served as a national finance co-chairman for the PAC. He has also given nearly $5,000 to Hillary Clinton's presidential campaign, and earlier this year he gave between $500,000 and $1 million to the Clinton Global Initiative. Ozkan is variously listed on campaign finance records as president of Baharu Inc. and chairman of Everglobe Partners LLC, but neither company has a functioning telephone number or email address. Ozkan could not be reached for this story.”

Conservative US journal The National Interest, referring to the USA Today report, claimed the relationship between Gulenists in the United States and Clinton is a “new scandal.”

That's the background of Erdogan’s rather sarcastic, if not harsh, remarks targeting Clinton.

But would Erdogan’s Turkey prefer a Trump presidency? Most probably, yes. It was Erdogan who inaugurated the high-rise Trump Tower shopping mall in Istanbul, with Turkish media mogul Aydin Dogan in 2012.

The images of a very happy Trump, Dogan with his entire family and the smiling faces of Erdogan and his wife are still in the Turkish public's memory.

Less than a month before the election, Erdogan’s characterization of Clinton indicates his choice for the next US president.